"Ladles and jellyspoons" is a phrase that come from a humorous play on "ladies and gentlemen". However, both are also utensils you may find in the kitchen. Test your knowledge of some other useful utensils.

Quiz Answer Key and Fun Facts
1. It's not the jellyspoon from the title... what is different about a grapefruit spoon?

Grapefruit spoons are used to puncture the grapefruit flesh and to extract the inside for consumption. The edge is toothed or sharpened to facilitate this. The grapefruit spoon is often also used for kiwis, but is not a utensil that comes standard in a cutlery set.
2. How about ladles? While in the kitchen they're used for serving, where else might one use a ladle to do one's job?


Answer: At a foundry

A ladle is a deep spoon with a long handle used for serving soup out of a pot and into bowls. Some ladles have a spout on one side of the spoon in order to facilitate the pouring of the liquid, however, left-handed people are usually at a disadvantage with these kind of ladles as they are geared towards the right-handed majority.

The ladle is also the tool used to pour molten metal in a foundry. This ladle, however, is not handled with bare hands.
3. Meaning "half moon", this knife looks exactly like that. Used to slice quickly with two hands, what utensil is being described here?

With handles on each end of the down-turned crescent blade, a simple rocking motion is all that's needed to slice herbs usually. Some larger versions exist and these can be used for pizza or other flat things that will not try and escape as you use the blade. In French, this utensil is known as a 'hachoir'.
4. Back and forth, back and forth, my hand whirrs repeatedly until the carrot I have is entirely sliced. What is this musical-sounding utensil which allows me to very thin strips?

A mandoline reminds me of a grater but without the grating action. With a very sharp blade slightly raised above the surface that the vegetable is pressed on, with a flick of one's wrist the vegetable gets sliced thinly onto the surface below the mandoline. This is often known as the julienning of vegetables.
5. Remember using a ladle to serve soup? Well, how do you spell the vessel that is used as a serving dish for the soup, one that may remind you of a city in Italy where Juventus FC call home?

Often a ceramic dish, the tureen is a handled serving dish often used for soups and stews. Usually it is placed at the table covered to keep the heat in, and it is not uncommon to find these tureens designed ornately. They are associated with French nobility and one prevailing belief on the origin of the word 'tureen' is that it honours Marshal Turenne, a war hero of France in the days of Cardinal Richelieu, Louis XIII, and, therefore, the fictional Three Musketeers.
6. A 'santoku bocho' is a kind of blade that many chefs favour in order to slice and dice vegetables. What type of blade is it?

A santoku blade is different from the regular chef's knife blade because it is flat. The blade is often also thinner and lighter than the regular chef's knife and the slicing motion is done heel to tip rather that the opposite. The word 'santoku' is Japanese for 'three virtues' which points out the three things that are traditionally done with this knife - dicing, cutting and mincing.
7. An urokotori is used in the (Japanese) kitchen with what kind of food?

The urokotori is a fish scaler and is rubbed across the fish from tail to head in order to remove all of the scales from fresh fish. Repeated use is necessary to remove all of the scales. This is useful when the skin of the fish is to stay intact and not pierced. Though the name originates from Japanese, this utensil is not exclusive to the Japanese kitchen.
8. Apart from allowing wine to get air, why would one pour wine from a decanter?


Answer: Wines may have sediment

While aeration is often the primary reason that wines are served from decanters, some wines may be sedimentary. The wide base of the decanter, when tipped, is deep enough to catch most of the sediment and to prevent it from pouring into the glass.

Though it may be nice to see when the wine needs refilling, not all decanters are transparent. In fact, between the fall of the Roman Empire and the glass revival in Italy, most decanters were not made out of glass. Many of the glass or crystal decanters may be very fragile and delicate whereas wine bottles are traditionally made rather strong. Finally, though some snob may state that pouring wine out of a decanter is the proper way of serving wine, there's nothing wrong with serving it out of the bottle. In fact, what are you trying to hide when you serve it out of the unlabelled decanter, eh?

A carafe is a decanter without a stopper.
9. Resembling a pipe with a rubber bulb on the top, what utensil is used when you want to keep meat juicy by using its own juices?

Often, when cooking meat of all kinds in an open-topped container in the oven, it may get dry. Using a baster, you can suck up some of the juices that the meat is cooking in and then squirt it out on top of the cooking meat in order to keep it moist and to enhance the flavour.

While requiring regular basting, another option is to cook the meat in its own bag, thus preventing the loss of any moisture.
10. Locally known as a braadpan, a cast iron pot which is thrust directly into the fire is commonly known as what kind of oven?

A Dutch oven is a great way to cook something evenly over an open flame or on hot coals. It is a cast iron pot with legs and some have an enamelled interior to prevent sticking. However, proper care and storage, as well as constant use can make an all cast iron Dutch oven have a nonstick interior as well.

Anything that can be made in the traditional oven can be cooked inside the Dutch oven. Many people use it as a slow-cooker, and it's often considered outdoor gear - great for camping or an outside cookout.
Source: Author LeoDaVinci 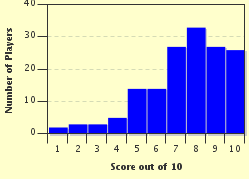 
Other Destinations
Explore Other Quizzes by LeoDaVinci