This quiz is about that wonderful beverage that gets you going in the morning, coffee.

Quiz Answer Key and Fun Facts
1. What is the chemical that gives coffee its "kick"?

There is much debate about the health benefits of caffeine. It is a mild stimulant that increases alertness and a is mild appetite suppressant. A fatal dose would be 5000 milligrams, which is equivalent to drinking 40 cups of coffee rapidly. That's a lot of coffee!
2. Which of the following is NOT a regular slang term for coffee?

Although coffee may cause the "jitters", it isn't usually known by that name.
3. Which region of the world is generally credited with discovering coffee?

The legend goes that a goat herder noticed his goats would stay up all night if they ate a certain berry. He chewed on it and found he had more energy.
4. What European city had the first coffee houses? Hint: It's also known for its canals.

This was around 1600. Coffee was introduced to the city from the Arabian peninsula.
5. What famous London insurance market started as a coffee house?

Edward Lloyd's Coffeehouse opened in 1688. Coffee houses became the place to socialize and certain occupations tended to congregate at certain coffee houses.
6. In America, "coffee black" generally means which of the following?


Answer: Neither milk or cream

According to Wikipedia, coffee black is without milk or cream. When I grew up, "coffee black" meant nothing in it, no sugar, cream or milk.
7. What event caused Americans to start drinking coffee instead of tea?

The Boston Tea Party was the American response to the British tax on tea. A bunch of men, dressed up like Indians dumped crates of tea into Boston Harbor to protest the tax. It became patriotic to drink coffee after that.
8. Fill in the blank to this commercial jingle; "The best part of waking up is __________ in your cup."

Folger's was started in 1850 in San Francisco. Three brothers came to mine gold. The youngest was unable to accompany his brothers due to lack of money and stayed in town, working. He partnered with another man and they thought that grinding the coffee beans after roasting would make the coffee more convenient.

When the brother had enough money, he went to his brothers, carrying the ground coffee in cans.
9. In New Orleans, what is commonly added to coffee to make it last longer?

Louisiana was originally a French Colony. During the French Civil War, coffee was scarce, so chicory was added, to stretch the coffee and to decrease the bitterness. Cafe du Monde in New Orleans is known for its various coffee blends with chicory.
10. Cafe au Lait is what in English?

Cafe au Lait is usually half coffee and half steamed milk. It's known as Cafe con Leche in Spanish.
Source: Author jane3cats 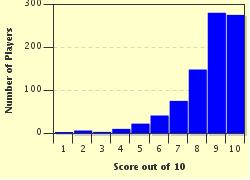 
Other Destinations
Explore Other Quizzes by jane3cats