We all get a little droopy in the mornings sometimes. Try these ten morning drinks to perk you up.

In the US, the milk found in most grocery cases comes from cows, but people in other cultures drink milk from yaks, sheep, goats, camels, or other mammals. In addition to drinking the milk, it can be processed to create cheese, whey, yogurt, ice cream, or dried milk products.

Other products, also referred to as milk, are made from soy, almonds, rice or coconut.
2. Turkish drink made with flour from the tubers of an orchid

Tubers from the orchid genus Orchis are ground to create salep flour. The flour is used in drinks and desserts.

The drink is normally a warm winter drink. Recipes seem to vary, some mixing the flour with water, others with milk. The drink is often garnished with cinnamon and ground pistachios.
3. Hot Italian drink made with double espresso, milk, and steamed milk foam

The cappuccino drink apparently originated in Vienna in the 1700s, and was perfected (as most modern coffee drinkers would say) in Italy in the twentieth century. The texture of the foam rises to an art form at a good cafe.
4. A fruit drink made from blood, navel or valencia varieties

Orange juice can be easily made at home, or it can be purchased frozen or freshly squeezed. Bottled juice purchased at the grocery store is generally a mixture of juice from different types of oranges.

In 1967 orange juice became the official beverage of Florida.
5. Hot drink made by steeping cured leaves in hot water

Tea -- a Chinese invention -- typically uses leaves of the tea plant, Camellia sinensis. The curing process has a tremendous effect on the eventual flavor. Different combinations of wilting, crushing, oxidation, yellowing, and even fermentation yield different types, such as oolong, white, green, and black. The plant also affects the flavor, of course, with different strains destined for different blends.

Once you've purchased the tea, there are other ways to change the flavor. For example, you might steep the leaves in water for a longer or shorter amount of time, or you might try sweetening it with honey, sugar, or milk. (If you're like me, you'll add a lot!)
6. A drink that US astronauts famously took to outer space

Tang was initially marketed in 1959, but truly gained popularity when NASA provided it for John Glenn's famous space flight in 1962. The original formulation contained 100% RDA of vitamin C and only 40 calories.

The powdered form of the orange-flavored drink is added to water.
7. Thick drink favored by athletes and bodybuilders

Protein shakes are designed to supplement normal nutrition with extra protein and carbohydrates, perhaps enhancing muscle growth. The key ingredient is protein powder, derived from a variety of sources: milk, egg, rice, soy, whey or casein. Add milk or juice; thicken it if desired with something delicious, like oatmeal or even ice cream; blend it; and enjoy. If you're drinking it after a tough morning workout, extra calories are a godsend!
8. Drink originally made of malt, milk, and eggs, flavored with cocoa

Developed in Switzerland in 1897, the drink was called Ovomaltine. Today there are variations in how it is made by country. It was exported to Britain in 1909 and later to the US and Canada.

In the US there were promotions on the radio shows "Little Orphan Annie" and "Captain Midnight". In Britain "The League of Ovaltineys" was broadcast on the radio.
9. Fresh Chinese soy milk

It isn't complicated to make dou jiang from dried soybeans. Soak the beans overnight in plenty of water, and then pulverize them in a blender along with more water. Strain the bean puree into a pot through a filter bag (or, in a pinch, clean pantyhose), squeezing hard to get all the good stuff out. Then, simmer it on the stove for 10 or 20 minutes, stirring occasionally, and then add sugar to taste. You might want to cook it longer or shorter, depending on how much you enjoy the beany flavor. (If you don't like the flavor at all, try boxed soy milk from an American manufacturer, which goes to great lengths to get that bean taste out.)

Hot soy milk is a breakfast staple in China and Taiwan, both in a glass and in a bowl (with some soy sauce, fried dough, and scallions). Mmm!
10. Costa Rican drink of sugar and water

Cane sugar harvested in Costa Rica is squeezed to extract all of the juice. The product is then boiled, evaporated and molded into what are called tapas (lids). Agua dulce is made by scraping off some of the tapa into boiling water (or milk).
Source: Author CellarDoor 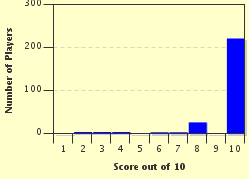 Related Quizzes
This quiz is part of series Sprint Reloaded:

Quizzes created during Sprint Reloaded (2017) by team Atuin (CellarDoor & mlcmlc). Includes those that didn't meet the original criteria, but still written for the sprint.