Fill Up My Plate Trivia Quiz

We had a pot luck barbecue last weekend, and I was delighted to fill up my plate several times with some of the lovely salads that appeared on the table. Let's look at some of their luscious ingredients.

Quiz Answer Key and Fun Facts
1. My first plateful of salad was this mixed vegetable salad my parents brought with them. What is the name of those cute little tomatoes that hardly need any preparation at all before they go into a salad?

Cherry tomatoes, which probably originated in northern parts of South America, can be any size from a marble to a golf ball. Some, slightly pear-shaped, are also known as grape tomatoes. Not only are they quick to prepare for a salad, but they also can be used whole if they are small enough, which allows them to provide a flavor burst when bitten into.

This salad also featured carrots and red capsicum/pepper, as well as several varieties of lettuce.
2. The next plateful of salad was an Indian vegetable platter that my older brother brought along. It had a number of interesting colors and textures in its vegetables. What vegetable was used to produce the reddish-purple wedges?

The salad had a combination of beetroot (the purplish wedges on the right side of the plate), radish (the white julienned vegetable at the top of the picture), cucumbers (the white seeded vegetables on the left side of the plate), tomatoes (red slices running down the middle), lemons (wedges shown scattered around the plate were squeezed to flavor the entire plate) and green chilies (one can be clearly seen at the left side of the beetroot), which can be eaten or considered as garnish, depending on your taste.
3. My sister contributed the pico de gallo with which I next filled my plate. What is the country from which this salad originates?

Pico de gallo is a Mexican vegetable mixture whose name translates literally as beak of the rooster. It is made from tomato, onion and chilies, with other ingredients that may commonly include lime or lemon juice, chopped cilantro (coriander leaves) as can be seen in the image, cucumber and avocado.

In some parts of Mexico, the term is used only to refer to a salsa mixture; in other parts it is applied to a range of salads.
4. My nephew wanted to make sure there was something substantial on the salad table, so he arrived with this pasta salad. After I had filled my plate with the salad, he garnished it with the leaves from a crunchy green vegetable which is usually described as coming in stalks. What vegetable would that be?

Celery is often used to add flavor to soups and stews, and the leaves make an attractive garnish. The stalks have a U-shaped cross section, which makes them popular for use in hors d'oeuvres by filling the hollow with tasty ingredients - cream cheese and peanut butter are often seen around my place.

My nephew's salad used farfalle, which he calls bow tie pasta, to provide the starchy base he finds so important. It also had cherry tomatoes and cubes of feta cheese, with a dressing he made by mixing a commercial vinaigrette dressing with mayonnaise.
5. My cousin also thought a pasta salad would be a good idea, and brought along the one shown here. As we filled our plates, each individual's plate was given a layer of what leafy green vegetable on which the pasta was then placed? Popeye would definitely have chosen this one!

The picture clearly shows that smooth-leaf spinach was used to line the plates - none of the other options looks remotely like it. Spinach is often considered a good source of iron, but it also contains oxalate, which prevents absorption of the iron unless it is ingested along with acidic substances, such as lemon juice, that counteract that effect.

My cousin's pasta salad used penne pasta, and included prawns, avocado and red capsicum/pepper in a mayonnaise-based dressing.
6. My aunt arrived with a salad that featured a calcium-rich green vegetable which was once banned from the White House by an American president. We were quite happy to include it in our spread, and I filled my plate with a salad that included the florets of what vegetable?

While all of these are members of the Brassica family, only broccoli was singled out by George H. W. Bush and banned from the White House during his presidency. Not only is broccoli high in calcium, it also conatins generous amounts of vitamin C. It is thought that some of the chemicals in broccoli may provide some protection against the development of certain forms of cancer; they certainly have anti-bacterial and anti-viral impacts on the human immune system.

Aunt Anne's salad also included red capsicum/pepper, spring onions, tomatoes, and crumbled feta cheese.
7. I filled my plate generously with the salad my grandparents brought along. As well as the vegetables, it featured two ingredients commonly added to salads for flavor and texture. What non-vegetable ingredients can be clearly seen in this image?

The cubes of fried or baked bread frequently added to salads are called croutons. Bacon is often added both to provide crunch and to add to the flavor palate of the dish. My grandparents brought along a romaine salad, with cherry tomatoes and carrot, as well as the bacon and croutons asked about in the question.
8. My next batch of plate-filling used this salad that my younger brother brought to the feast. He used a number of interesting ingredients, including boiled eggs and what raw fungus?

All of the incorrect options can be seen to be part of the salad, but they are not fungi. Raw mushroom is commonly added to salads, but more often to a plain spinach and mushroom salad than to the one concocted here. They are a good source of B vitamins.
9. My daughter brought along a salad with which I filled my plate more than once. The penne pasta, the tomatoes and the broccoli have all been seen in some of the other salads, but this salad included two items that were not in any of the others. One was several sorts of olive. What other vegetable ingredient was used as part of her salad?

Caper berries, which you can see in the lower right part of the image, are the fruit of the more familiar caper, which is the flower of the caper bush. Both capers and caper berries are used in Mediterranean cuisines. If you don't live in that region, the chances are you are used to using a pickled specimen in your cooking.
10. I left my own salad to be the last plateful, in case I got full - I knew I could always make some more for myself! I included an ingredient that is frequently included in salads, although some find it to be overly pungent. So what are those translucent white semi-circular vegetables in the picture?

My salad featured the crumbled blue cheese, one of my favorite salad additives, which you can see in the picture. In addition, the image shows the onions (which I steamed in advance, to suit the preferences of a family member), some fried onion bits, lettuce, red capsicum/pepper (a lot of my family seem to favor these!), mushrooms, olives and iceberg lettuce.

The Ritz crackers were not an integral part of the salad concept.
Source: Author looney_tunes 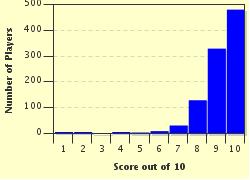 Related Quizzes
This quiz is part of series I Got a Thumb!:

These quizzes all received a thumb of approval, as an Editors Choice.


1. Looney's Word Circle Average
2. You've Got to Be Yolking! Average
3. A Chilean Challenge Average
4. Life, Death, and Beyond: Funerary Art Average
5. Galloping to the Cinema Average
6. Eleven Pipers Piping Average
7. Fill Up My Plate Very Easy
8. From a Rock to a Roll Easier
9. Let the Chips Fall Average
10. Songs for the Soul Average
11. Why the Sea is Salt Average
12. Seoul Sisters Easier