Many of us guzzle down this thirst-quenching liquid while at the gym or around the town, but how much do you know about this drink's origins?

This is also how the drink got its name. University of Florida's football team is nicknamed the "Gators", hence the name Gatorade.
2. What substance (that the FDA later banned) was originally in Gatorade?

Cyclamate was removed from Gatorade a year after it was discovered to be a carcinogen. Cyclamate is approximately 30-50 times sweeter than sugar, depending on the concentration of it in the beverage or medicine.
3. In what year did Gatorade switch from glass to plastic bottles?

Gatorade is now sold mostly in 20 fl. oz. bottles (approximately 591 milliliters.) It comes in many flavors and subcategories, such as Gatorade Rain and Gatorade: X factor.
4. When did the "Gatorade Dunk" first occur? (The "Gatorade Dunk" occurs after a meaningful win when a cooler full of Gatorade is dumped on a coach's, star player's, or owner's head.)

The first "Gatorade Dunk" was performed in 1984 by Jim Burt of the Giants, who was angry at Coach Bill Parcells. This tradition later developed into an action of joy by victorious teams.
5. Which of these flavors was NOT discontinued after being introduced in 1997?

Grape is still a great selling product, but not nearly as much as the original Lemon Lime, Orange, and Fruit Punch flavors.
7. Gatorade is Kosher certified.

No, it's not kosher certified. The only answer it gives on Gatorade.com to the question if it is Kosher certified is "No."
8. After the 1967 Orange Bowl in which Florida beat Georgia Tech, what did the coach of Georgia Tech say about Gatorade?


Answer: "They had Gatorade, we didn't. That made the difference."

Undoubtedly one of the most famous Orange Bowl quotes ever, it was uttered by Bud Carson.
9. How many calories are in an average 20 oz bottle of Gatorade?

This is still less than most soft drinks, which average around 150 calories per 20 oz. bottles.
10. What is Gatorade's symbol, usually shown on every bottle of Gatorade?

The lightning bolt is shown on most bottles, usually red or orange. The lighting bolt is usually shown in the background behind a banner on the wrapper of the bottle proclaiming "Gatorade."
Next time you drink this beverage, be sure to remember what you are drinking, and its incredible journey from home-brewed drinks for a College Football team to being mass produced in numerous countries.
Source: Author milky54 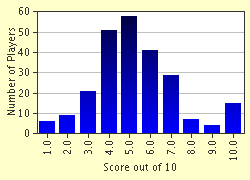 
Other Destinations
Explore Other Quizzes by milky54