Give Peas a Chance Trivia Quiz

Kitchen? Kitchen, you say? More like a torture chamber! Can you believe what they're doing in there to those poor vegetables?

Quiz Answer Key and Fun Facts
1. I couldn't believe what I saw when I walked into the kitchen. The chef (torturer) was slicing the skin off those poor vegetables. Then he boiled the peeled carcasses in water, drained them, and squished them into a mush with a wicked-looking implement, adding butter and milk to hide what he had done. What poor vegetables were treated so horribly?

How much can one say about the potato? Perhaps one of the most versatile tubers in existence, some of my favourite dishes are made with potatoes (French fries, chips - and even some of the healthy ones!). Of course, the example in the question was that of 'mashed potatoes'.

Potatoes have become more and more popular around the globe as time has passed. According to the Wikipedia page on the potato, the first decade of the 21st century saw a global average of 33 Kg (73 lbs) consumed per person per year!

The term 'potato' as used in English originated with the Spanish 'patata'; some other names for the 'spud' in other cultures include: kartoffel (German), pomme de terre (French), brambor (Czech), and ziemniak (Polish) - just to give you a 'taste' (sorry, bad pun).
2. What some people will stoop to will never cease to amaze me. He dropped the vegetables whole in boiling water, salted for maximum pain. After they had been cooked alive, the chef cooled them off, then ripped their skins off with his bare hands. The blood-red staining of his fingers was not easily hidden. Then, he dropped them into a briny fluid... what kind of sick person was this, keeping such ghastly evidence preserved in glass jars for the world to see? What vegetables met such a sickening demise?

Perhaps the most recognizable of the beet family are the fleshy dark red roots that we also know as beetroot or garden beet. That was what I had in mind in the question, as the poor beets were (yummily) pickled. Other colours do exist in beets, although the majority of them are shades of red.

Other types of beets that are cultivated for consumption are sugar beets (used in the production of table sugar), chard (which has a beet-like root but is cultivated for the leaves), and mangel (used for animal feed (mangelwurzel)).
3. These vegetables tried to protect themselves by producing toxic leaves, but to no avail. The chef simply dropped the leaves in a compost heap (mass grave), and proceeded to dice the stalks. Such cruelty! The dismembered bits were then mixed with a number of other things (it can only have been done to hide the evidence), placed into a shallow dish, and thrust into an oven set at an excruciatingly high temperature! What vegetables were treated with such cavalier cruelty?

Because it is used in a way similar to fruit, rhubarb is not often thought of as a vegetable, but it is! By Free Online Dictionary definition, a fruit is "the ripened ovary or ovaries of a seed-bearing plant, together with accessory parts, containing the seeds and occurring in a wide variety of forms". Rhubarb stalks don't contain seeds.

That said, rhubarb falls within that kind of vague area that make it an either/or kind of food; it's a vegetable that is used like a fruit - sort of like the tomato, which is used like a vegetable but fits the definition of a fruit.

I like rhubarb pie.
4. I shuddered to see the chef rip these vegetables apart with his bare hands before subjecting them to a scalding steam. Afterwards, he made things even worse by pouring a hot melted cheese over their tender green heads. The devil couldn't think up worse! What vegetables were subjected to this torture?

Broccoli is part of the cabbage family, but thankfully doesn't taste anything like cabbage (don't get me wrong - I love cabbage rolls and coleslaw, but I personally prefer broccoli with melted cheese!). Broccoli, when broken up into it's individual sprouting branches, looks like little trees. I remember my days as a child when my parents would coax broccoli into me by saying that I was eating whole trees!

The word 'broccoli' is the plural of the Italian word 'broccolo', which refers to 'the flowering head of a cabbage'. Commonly steamed (as in the question) or boiled, broccoli are also often found served uncooked as part of veggie platters, usually with a dip of some kind.
5. I couldn't believe my eyes when I saw the torturing chef actually SHRED these poor vegetables into tiny bits. It was impossible to even recognize what they had once looked like, so round and perfect. The chef didn't even bother to turn to heat to continue his cruelty - I guess the shredding was sufficient. Why add insult to injury with the buttermilk and mayonnaise, though? That I couldn't figure out. What vegetables were so viciously slaughtered?

Cabbage is related to the aforementioned broccoli, as well as cauliflower and Brussels sprouts. Cabbage comes most commonly in three colours: green, purple, and white. They can range anywhere from one to eight pounds (1/2 Kg to 3 1/2 Kg) in weight. Most importantly, they can come in such wonderful arrangements as cabbage rolls, coleslaw, bubbles and squeak, and (as I grew up knowing it) rotkohl (cooked red cabbage).
6. I had to avert my eyes as the sadistic chef continued his murderous ways. This time he mercilessly ripped off the vegetables' ears before submersing them naked in boiling water. That was it, but isn't that enough? I shuddered to think what was next for the poor vegetables when they were laid out like so many bodies, salt and sticks of butter ready and waiting. What vegetables had been treated so harshly?

Corn is another one of those vegetables that kind of cross the line by virtue of its use. Technically a grain, corn (or maize) has a number of uses, including as a feed crop for livestock, and as a fuel (ethanol). I, personally, prefer its sweet corn variant, used primarily for human consumption. Nothing quite beats fresh 'peaches and cream' corn on the cob in the summer.

Maize has become one of the most widely-grown crops in North America, with hundreds of millions of metric tonnes grown yearly.
7. The next thing I saw actually made me believe (for a brief moment) that this chef had some remorse for his heinous acts. As he proceeded to cut into these vegetables, he began to cry! Yet despite this outward show of emotion, it didn't stop him from throwing the pieces into a pan to be fried in hot oil. I was flabbergasted! What vegetables met this fate?

There are many types of onions within the Allium genus, but what most people think of as simply 'onions' are within the Allium cepa species. Onions can be used as a main dish on their own, but they are more commonly used to accentuate the flavour of other foods, or to act as a secondary part of other dishes.

And, of course, the onion acts as a wonderful metaphor for depth (onions come in layers).
8. I could understand why these vegetables had tried to hide in the ground - their orange colour made them stand out, even from a distance. The vicious chef proceeded to peel off their beautiful skin, then vivisect them into long strips. I exclaimed, "what are you doing to them!?" He replied with a bloodless calm that made me shiver, "Julienning." What vegetables were being treated so?

One well-known way to prepare carrots is called 'Carrots Julienne'. It is essentially as described in the question, the shaping of foods into long, thin, matchstick-shaped slices. Other types of food most commonly made by julienning are celery (for the dish Céléris Remoulade), and potatoes (Julienne Fries).

The taproot is not the only edible part of the carrot; the leafy part can as well. Mind you, it doesn't taste nearly as good (especially in comparison to other leafy vegetables), and is rarely used for human consumption.
9. The things that I had seen this chef do with a knife up till now had appalled me, but that paled in comparison to what I saw next. The only word I can think of is 'minced'. By the time the chef was done, the vegetables were totally unrecognizable! And then, all he did was use the aromatic bits to continue his dark arts with OTHER vegetables and *shudder* meats. What vegetables had been made so unrecognizable?

Garlic also falls within the Allium genus, along with onions, but these are called Allium sativum. Evidence of garlic use (both for cooking and in medicine) goes back for thousands of years. More recent times have also found them to be good for the repelling of vampires!

Personally, I like a good garlic sausage on my breath when I go vampire hunting (Or if I want to prevent my wife from making me watch "Twilight").
10. The last thing I saw before I passed out chilled me to the bone. That sick, twisted person that called himself a chef reached a new low. He ripped a number of pods off a mother plant, then proceeded to crack them open in a motion that reminded me of twisting necks. Not even bothering to hide his despicability, he yanked the babies out and popped them into his mouth, crunching them in what I can only describe as a sickeningly self-satisfied fashion. What vegetables had he killed so brazenly?

Finally, the peas get their chance to be the answer to a question! Peas are ANOTHER one of those vegetables that straddle the line between fruit and vegetable. Technically, peas are a seed within the pod, which is the fruit of the pea plant.

Regardless of definitions, peas are tasty - one of my favourite dishes is split pea soup. They are commonly paired with carrots (especially in frozen produce), are famously made into "pease porridge" (like the nursery rhyme), and in Southeastern Asia, are dried and salted and eaten as snack food.

Perhaps most famously, the pea pod was studied by Gregor Mendel in the 19th century, providing the beginnings of modern genetic science.

I think those peas got their chance and ran with it!
Source: Author reedy 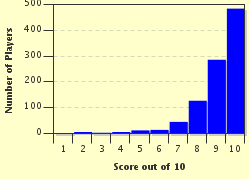 Related Quizzes
This quiz is part of series My Author's Challenge Titles, Part 3:


1. Give Peas a Chance Easier
2. Celebrity Chemistry Tough
3. The Bland Leading the Bland Average
4. It's a Small World After All Average
5. Rock Solid Easier
6. Worlds of War Average
7. Seeing is Believing Average
8. Pardon Me, Just Invading Your Land! Average
9. Rome Wasn't Built in a Day Average
10. The Writing's on the Wall Average