History of The Transformers Trivia Quiz

Let us see if you remember the history of the Transformers toys. This quiz will focus on the original Generation One (G1) toyline released between 1984-1990.

Hasbro, Inc. is an American toy company founded in 1923 as the Hassenfeld Brothers company. They changed their name to Hasbro in 1968. They are known for producing the G.I. Joe and My Little Pony toy lines. Hasbro began producing Transformers in 1984 with many of the toy designs adopted from Japanese toy company Takara.
2. From which Japanese toy line were most of the original Transformers designs based off of?

Many of the original Transformers toys were taken from the Diaclone toy line produced by Takara in Japan. Optimus Prime, the Dinobots, the Insecticons and many of the original 1984-1985 Autobot cars and Decepticon jets were based off Diaclone figures. The Diaclone toys were initially designed to be battle mechs to be piloted by small humanoid figurines.
3. Which Transformers toy had an alternate mode of a VF-1 Super Valkyrie, a fictional jet seen in the Macross/Robotech series?

Jetfire's toy was licensed to Hasbro from Japanese toymaker Takatoku Toys, not from Takara. Takatoku Toys was later bought out by Hasbro and Takara's competitor Bandai. Because of this, the Jetfire character could not be used in American media. His character was renamed as Skyfire for the television series and his cartoon/comic model had to be changed so as not to reflect his toy design.

His toy design was used for the Macross/Robotech series.
4. Which Transformers toy was marketed as "The Most Challenging Transformer of Them All"?

Sixshot is a Transformer with six different transformations. He transformed into a jet, a tank, an armored car, a wolf, a gun and a robot. He was released in 1987 and is the "The Most Challenging Transformer of Them All" according to his commercial. He is seen in the fourth season of the American television series and had a key role in the Japanese only series "The Headmasters".
5. Which original Transformer's toy design was not based off of a Takara mold?

The designs for Megatron, Soundwave and many of the cassette Decepticons were taken from the Micro Change toy line also produced by Takara in Japan. Bumblebee and the other original Mini-Bots were also released with this line. Shockwave, a Decepticon who transforms into a laser gun, was not designed by Takara. His toy was licensed from a Korean toy company named ToyCo.
6. Which of these Transformers was available only via mail-order?

Reflector was a Decepticon who transformed into a camera. He was released in 1986 as a mail-order toy only. He consisted of three different robots named Spectro, Spyglass and Viewfinder. The three robots combined with each other to form the camera. Reflector was seen in season one of the original cartoon, but in his cartoon model all three robots were the same, except for the center robot who had the lens on his chest.
7. Which of these Transformers had a single vehicle mode and transformed into both an Autobot robot and a Decepticon robot?

Punch and Counterpunch are the same toy, which was released by Hasbro in 1987. It transforms into a blue sports car resembling a Pontiac Fiero. The gimmick of this toy is that it had two distinct robot modes, one being an Autobot and the other a Decepticon. Pounce and Wingspan were the Decepticon clones. Fastlane and Cloudraker were the Autobot clones.

The clones were two separate toys that shared the same robot design, but transformed into two different alternate modes.
8. Which Decepticon Powermaster toy was never released in North America?

He is the main antagonist in the Japanese series "Super-God Masterforce".
9. Which of these combiner teams could not swap limbs with another team?

The Predacons who form Predaking could not swap limbs with any other team. The other teams are considered to be "Scramble City" type combiners. In 1986, the Stunticons, Combaticons, Aerialbots and Protectobots were featured in a Japanese exclusive cartoon episode called "Scramble City" where the combiners showed off their ability to swap limbs with one another.
10. Which Transformers subgroup had figures that did not transform? 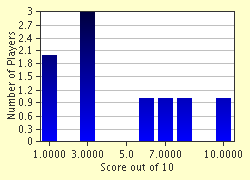 Related Quizzes
This quiz is part of series Toys of the '80's:


1. The World Of GI Joe Average
2. I Have The Power! Average
3. History of The Transformers Average
4. Teenage Mutant Ninja Turtles Average
5. GoBots Average