Since you asked so nicely, there will be no green peas in this quiz, but plenty of other legumes.

Quiz Answer Key and Fun Facts
1. Which of these is a common feature of all legumes?


Answer: They can change atmospheric nitrogen into useful compounds

While many legumes can be described by the incorrect options, it is nitrogen fixation that is the defining characteristic of legumes. Nitrogen makes up around 80% of the atmosphere, but is incredibly non-reactive under normal conditions. Legumes have bacteria growing in nodules on their roots which allow them to turn the nitrogen molecules into compounds. Most plants absorb nitrogen compounds from the soil as they grow, but legumes can be planted in a field to actually return nitrogen to the soil.
2. The common bean ('Phaseolus vulgaris') was used by Mesoamericans in a planting technique called "Three Sisters Planting". What three plants formed the basis of this technique?

Corn (also called maize), climbing beans and various kinds of squash were the agricultural staples of many North American native groups, and are often referred to as the Three Sisters. One common way of growing the crops was to arrange hills of corn (each containing three or four plants) scattered around the field, with beans planted at their base, and squash plants between the mounds.

The corn provided a climbing support for the beans and shade for the squash, the beans provided nitrogen for all of the plants, and the squash provided ground cover to inhibit the growth of weeds. Win-win-win!
3. Which East Asian legume is used to make tofu, among a wide variety of products?

Dried soy beans can be soaked and ground to produce soy milk, which can be drunk directly, or turned into tofu, in a process similar to the making of cheese from animal milk. While tofu has little flavor of its own, it readily absorbs the flavor of foods with which it is cooked, and is a useful source of non-animal protein.

When soybean oil is extracted, one of the useful byproducts is soy flour, which can be used as a gluten-free flour substitute, or processed to produce texturized vegetable protein (TVP) which is used both as a meat substitute and as a meat extender.

"What about soy sauce?" I hear you ask. Soybeans can be mixed with water and salt, then fermented with a mold such as 'Aspergillus oryzae'. This produces fermented soybean paste, which is compressed to remove the liquid, which is soy sauce. The solid residue is often used as food for livestock.
4. "Found a peanut, found a peanut, found a peanut just now" is the opening line of a song popular with children of all ages. In what mountainous country is it thought that peanuts were first cultivated?

The peanut has a genetic makeup indicating that it was produced when two different species combined in the wild to form a tetraploid species. This means that it has two sets of chromosomes for the same properties, one from each of the original diploid species.

Instead of the usual two copies of each gene, one inherited from each parent, it has four! This is thought to have occurred somewhere in South America, around 8,000 years ago. The exact location is uncertain, but Peru is the only option given that is in the right region. Peanuts spread throughout Mesoamerica, and the Spanish conquistadors found them when they arrived. Subsequent trading spread them throughout the world, including to China, which was the world's largest peanut producer in the early years of the 21st century.
5. Which legume with lens-shaped seeds is cooked with rice to make the Indian dish khichri?

While other pulses can be used, lentils are the traditional ingredient of khichri, which has many variants across the Indian subcontinent. In addition to the rice and lentils, there can be a range of spices; in some regions vegetables are added, in others nuts.

In northwest India it is served as a bland dish, the first solid for children and a suitable food for the sick. In southern India it is usually very spicy, while in Maharashtra prawns are added. English colonists took the idea home with them, and developed kedgeree.
6. The Roman orator Marcus Tullius Cicero had a family name derived from the Roman word for a Middle Eastern legume. Which of these is it?

It is thought that Cicero's forebears probably gained their wealth through growing and selling chickpeas (Latin 'cicer'). 'Cicer arietinum', also called garbanzo bean, ceci bean, Bengal gram and kala chana, has been cultivated in the Middle East for over 7,000 years. Cooked chickpeas can be served in soups and stews; made into salads; mashed with sesame paste to produce hummus; chopped, formed into balls and fried to make falafel; or just roasted and eaten as a snack. Dried chickpeas can be ground to produce besan, or chickpea flour, which is popularly used in a range of Asian cuisines.

In the Philippines, chickpeas preserved in sugar syrup are a common addition to halo-halo, a dessert made from shaved ice and evaporated milk.
7. 'Vicia faba', the fava bean, is widely referred to in English by which of the following names?

There are a number of varieties of these beans; the field bean and the horse bean are usually used for animal feed, while the large-seeded varieties called fava beans in the US and broad beans in the UK and many other parts of the world are eaten by people. Broad beans are very fiddly to prepare - they have to be removed from the pod, then have their outer skins removed (which can be made easier by boiling them briefly to loosen the skin), and only then are they ready for you to start cooking. They are fairly bland in flavor if simply boiled, but absolutely delicious in the Egyptian dish ful medammis, which is made from broad beans which have been boiled and mashed with olive oil, chopped onion, garlic, parsley and lemon juice. Traditionally served for breakfast, ful is usually accompanied by bread with which to scoop it up; other accompaniments can include pickled vegetables, eggs, and a range of flavoring sauces.
8. One of my childhood favorite vegetable dishes was succotash - I loved the color combination produced by combining lima beans with what other vegetable?

Lima beans are also sometimes called butter beans, but in many places around the world that term is used for another legume, which can get very confusing. The lima bean, which originated in the Andes, comes in both green and yellow varieties. The word succotash comes from a Narragansett word for boiled corn kernels, and is used to describe a dish made by mixing corn with beans, usually but not always lima beans. Regional variants may include the addition of other ingredients, including tomatoes, capsicum (bell peppers), and onions.

It can be a side vegetable with butter melted over the top, or cooked in a casserole with a crust to produce a main dish pie. To quote Daffy Duck, "Sufferin' succotash!"
9. Which of these legumes, originating in East Asia, is commonly used to make red bean paste?

The azuki bean is thought to have been first cultivated in Korea, before being exported to Japan. The Japanese call it 'small bean' to differentiate it from the 'large bean' or soybean. In China it is called the red bean, and is boiled, mashed and sweetened to produce red bean paste. Red bean paste is an ingredient in the mooncakes traditionally consumed while moon-gazing as part of the Zhongqiu Festival in the autumn.

A typical mooncake is circular, about 10 cm (4 in) in diameter and half that in depth.

The thin pastry crust surrounds a thick filling, usually of red bean paste, in the middle of which there may be a salted egg yolk to represent the full moon.
10. The pod of which of these legumes is used to make treats for dogs, because it does not contain the alkaloid theobromine found in chocolate?

The carob tree, 'Ceratonia siliqua', originated in the Mediterranean region. The part of the plant that is processed to make a chocolate substitute is actually the pod , not the seeds that are consumed when eating most legumes. The pod is mildly sweet, and can be used to make a chocolate substitute that is safe for dogs, who can easily be poisoned by the theobromine found in chocolate. Of course, theobromine is not great for people either, and can cause sleeplessness, anxiety and nausea. Remember that the next time you head for the Chocolate Vault!
Source: Author looney_tunes 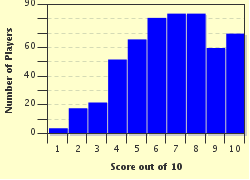 Related Quizzes
This quiz is part of series Commission #21: