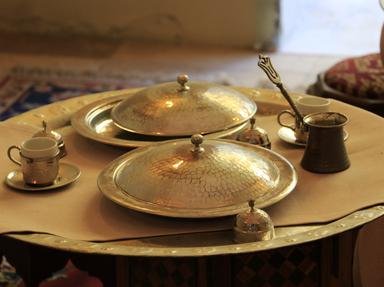 The cuisines of many nations would not be what they are today were it not for the various ingredients that have circumnavigated the globe over the last millennium. Come along on a gastronomic journey.

Quiz Answer Key and Fun Facts
1. Tofu is an important part of traditional Japanese cuisine, but the earliest known reference to it existing in Japan is in an eleventh century document. From where did the Japanese learn the technique for producing tofu from soy beans?

Almost 2,500 years ago, trade between Japan and the Asian continent began. People from both Korea and China passed on ingredients and food preparation techniques to the Japanese, and somewhere around the end of the first millennium C.E. tofu arrived in Japan.

It has been one of the most important sources of protein for Japanese people, especially for those living inland and for Buddhists who adhere to a vegetarian diet. In 1782 a cookbook featuring 100 tofu recipes was released in Japan, and it was so popular that the next year a second volume containing a further 138 dishes followed.
2. Indian food has a very long history of flavourful curries, but one prominent ingredient in many of these dishes was not available to locals until around the beginning of the 16th century when trade links with the Americas were established. Which one?

By 3,000 B.C.E. turmeric and cardamom were both being harvested in India, and around this time the people of India had trade links with the Sumerians which gave them access to, amongst other things, cumin. Chilli, on the other hand, is indigenous to modern day Mexico and other parts of the Americas.

Indian cuisine has strong regional variation, clearly linked to local ingredients and culture, but has also proven adept at incorporating new ingredients into its dishes.
3. Food in the Americas changed markedly in the 16th century, too. Which one of these Mexican foods was not prepared there before the European colonization of the Americas?

Hard-shelled tacos, or tacos dorados, are what many non-Mexicans think of when they think of tacos, but the Indigenous people of the area never ate such a dish prior to the Spanish colonisation of the region. There are at least two reasons for this: firstly, the technique of frying required to produce the crunchy shells was not known in Mexico before Spaniards introduced it in the 16th century; secondly, even as the modern taco developed, people in most parts of Mexico tended to use soft tortillas as the casing for their favourite fillings.
4. The French dessert menu of the 21st century wouldn't be the same without chocolate, but when chocolate was first introduced to France, it was regarded with suspicion. Which of these was NOT something that helped broaden the appeal of chocolate in 17th century France?

Chocolate made its way to Europe via Spain, since Spaniards were the ones who transported it from the Americas. Initially, the French thought it potentially poisonous. This fear subsided around the same time as Spanish royalty married into the French court, and brought with them a love of drinking chocolate. Chocolate became associated with wealth both because of its connections with royalty and because those who could afford it enjoyed drinking it out of ornate silver and gold drinking vessels. Chocolate was associated with sensuality in art and literature of the period, and was also prescribed by doctors as a cure for 'frigidity'.
5. Today, tea is the unofficial drink of England, but it wasn't until the latter half of the 17th century that tea completed its migration from China to England. Which of the following is NOT true of the early consumption of tea in England?


Answer: Tea first became popular with the working classes and was only gradually accepted by the nobility.

The English were actually one of the last people in Europe to begin drinking tea. In 1660 the drink was only occasionally consumed by the relatively wealthy people who frequented London's coffee houses, but in 1662 Catherine of Braganza, a Portuguese princess, married the English king, and brought with her a love of tea. Tea became a feature of the English court and then affection for it spread to the rest of the population.

As tea's popularity increased, so too did the taxes imposed upon it. This meant that tea remained unaffordable for many poorer people, and also led to tea smuggling. Smuggled tea, beyond the grasp of the quality controls placed on legally imported tea, was often adulterated.

Sheep dung and toxic chemicals such as copper carbonate and lead chromate were often added to smuggled tea to help make inferior products command higher prices.
6. Pizza, lasagna and spaghetti Bolognese are iconic Italian foods that have been embraced by people all around the world, but the modern recipes for these dishes contain an ingredient which was not known in Italy before the 16th century, and was not widely used in cooking there until the 18th century. What is it?

Tomato is another food which originated in the Americas. By the 16th century it was known in Italy, but it was widely considered toxic. The tomatoes which first came to Europe were small and pale, and had an acidic flavour with an unpleasant smell. Italian gardeners played a pivotal role in reshaping the tomato of the Americas into the red, juicy fruit we know today. During the 18th century tomato gained popularity as an addition to pizzas and pastas.
7. Brazil first cultivated this crop in 1727, provided 97% of the world's supply of it by 1907, and remains the world's leading producer of it at the beginning of the 21st century. What is it?

Coffee originated in Africa, and did not make its way to Brazil until 1727. The Portuguese colonized Brazil in the early 16th century and the first product which they exported widely was brazilwood, a large tree. Sugar was an established crop by the middle of the 16th century, and during the 17th century, fuelled by vast numbers of slaves, a strong sugar industry grew in Brazil.

After coffee was introduced, it took hold, and its production eventually overtook that of sugar. Both corn and the Brazil nut are indigenous to Brazil.
8. This food originated in South America, and was originally introduced to Europe as an anti-famine food, but by the 1840s the people of Ireland were so dependent on it that the crop's failure caused alarming rates of sickness and starvation. What is it?

The potato was the food that sustained the majority of Irish people, especially peasants, in the nineteenth century, and even today Ireland's per capita potato consumption is notably high. Between 1845 and 1850 the failure of multiple potato crops caused widespread famine. By 1851 the Irish population had dropped by over 1.5 million.

Many of these people died of starvation and disease, but many others immigrated to places like America and Australia, setting up trails of immigration that continue to influence movement out of the nation today.

As of 2008, the Irish population has never again equalled the pre-famine numbers.
9. Today this fruit is an icon of New Zealand, but it has only been grown there since 1904. In the past it has been known as the Ichang currant, the monkey peach and the Chinese gooseberry. What is this fruit often called today?

China is the original home of the kiwifruit and there it was most often referred to as the monkey peach because the ripe fruits were a favourite of the local wild monkeys. Ichang was the Chinese port which supplied the plants that began being circulated to various parts of the world during the nineteenth century, and so the name Ichang currant gained popularity for a short time.

The fruit has also been widely known as the Chinese gooseberry, and though the precise origin of the name is unknown, it was clearly based on the facts that the plant originated in China and that the fruit tasted similar to the European gooseberry.

The name kiwifruit was first devised little more than forty years ago when New Zealanders began exporting the fruit to the USA.

The name was chosen purely because the kiwi (a bird) is a symbol of New Zealand.
10. The vast majority of foods that sustained the Aboriginal people of Australia for thousands of years are no longer eaten by most Australians. Some indigenous foods are gradually becoming more popular, but only one has been produced commercially since the nineteenth century. Which one is it?

The contemporary Australian diet is largely the product of the food eaten by English who colonised the continent in the eighteenth century and of the cuisines brought by subsequent waves of migrants. Early white settlers ate local fish and shellfish, but it is only recently that other proteins such as kangaroo, emu and crocodile have become (somewhat) popular amongst the non-Indigenous population.

The first commercial macadamia nut orchard was established in 1882 in Australia, one year after the plant had been introduced to Hawaii. Since then the nut has become popular all around the world. Techniques for producing wild honey, or 'sugarbag', on a modest commercial scale have recently been developed and so this distinctive product is becoming available for sale. Wattle seeds have a nutty, coffee-like flavour and are beginning to appear as flavouring in things like cappuccino and ice cream. Quandongs, or desert peaches, are not widely available, but they are beginning to appear on the dessert menus of some restaurants.
Source: Author looney_tunes 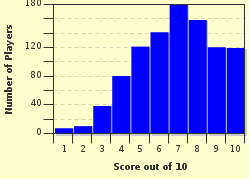 Related Quizzes
This quiz is part of series Let's Eat:

If it's not time to eat something, it must be time to play a quiz about scrumptious foods.