The Creatures in Your Garden Trivia Quiz

Let's see if you can recognise the common name of each plant from the translation of the genus and other assorted hints. Each genus has an animal connection.

Quiz Answer Key and Fun Facts
1. Although from the 'dolphin' genus, the common name for these plants refers to the body part of a bird. What is the name of the plant?

Delphinium, meaning 'dolphin' in Latin, is the genus for around 300 species commonly called 'larkspur'. The 'dolphin' name is said to be a reference to the shape of the nectary. The plant's petal-like sepals grow together to form a spur, giving rise to the common name - most species of larks (the bird) have long hind claws like spurs.

All larkspurs are poisonous to man and livestock. The plant can be used to make a blue dye. Larkspur is also the common name for plants in the genus Consolida, which is closely related to the genus Delphinium.
2. Once thought to be hungry as a wolf, what is the name of this nitrogen-fixing plant whose 'wolf' genus name is reflected in its common name?

There are some 200 species in the genus, which are mostly herbaceous perennials. Lupin (known as lupine in North America) comes with a long history of human use, its seed being used as a food source for perhaps 6,000 years.

Like other legumes, it has the ability to use nitrogen in the air to make ammonia through nitrogen-fixing nodules on its roots. As such it can be used a pioneer species to introduce fertility into otherwise barren soil. The plant shown in the photo is Lupinus pilosus.
3. This genus of plants sound confused with Latin-derived names of 'eagle' (genus) and 'dove' (common name). One species of this genus is also the state flower of Colorado. What is this plant?

Aquilegia is the genus name for around 60 species and columbine is the common name. The names are said to reflect the shape of the flower, namely either an eagle's talon or a cluster of five doves. It is also sometimes known as 'granny's bonnet'. The photo shows an example of A. flavescens (yellow columbine).

The other answers are connected to the national symbols for Ireland (clover from the genus Trifolium), Scotland (thistle, possibly from the genus Cirsium) and Wales (daffodil from the genus Narcissus).
4. What is the name of this plant from the 'little frog' genus known for its lustrous petals and an old wives' tale?

Ranunculus is Latin for little frog and has been attributed to the Roman writer Pliny. It may be a reference to many of these plants being found near water. This genus encompasses some 600 species including buttercups, spearworts and water crowfoots. The one shown in the photo is R. adoneus (alpine buttercup).

The old wives' tale is the one about holding a buttercup under someone's chin to tell whether or not the person likes butter. It is poisonous to livestock and so doesn't have much of a connection with butter.
5. The genus derives from the Greek for 'hedgehog aspect', a rolled-up one. What is the common name for plants of this genus?

Belonging to the thistle tribe, the genus Echinops has some 120 species. The one shown, E. sphaerocephalus (meaning 'round head'), is Eurasian in origin although it has achieved weed status in North America.
6. Derived from the Greek, the photo shows the type species (Echium vulgare) for this genus. Which snake gets a mention in the plant's name?

E. vulgare has the common name of viper's bugloss and is one of 60 species in this genus, native to Europe and North Africa. 'Vulgare' means 'common' however 'bugloss' is a shortened version of the Greek word for 'ox-tongued'. The viper part of the name could be due to either its seed being shaped like a viper's head or its supposed property of curing snake bites.

One species (E. plantagineum or purple viper's bugloss) has become a major pest in Australia, killing livestock who eat too much of it. On the plus side, the seed oil is valuable in cosmetics and is a potential fish oil substitute. Australian names for it include Salvation Jane, Lady Campbell weed and Riverina bluebell.
7. Which plant links the 'lion's paw' genus to a song from a 1959 Rogers and Hammerstein musical?

"Edelweiss" is the song and "the Sound of Music" is the musical. Leontopodium alpinium (or edelweiss) has a long history of symbolic use in Austria, Germany and Switzerland. Edelweiss could be translated from German as 'noble-white'. The genus, part of the daisy or sunflower family, has around 60 species.
8. What plants of the 'bird's milk' genus have a biblical connection?

The biblical connection is the nativity story where the three wise men are guided by the Star of Bethlehem. Myrrh is not a plant but is the aromatic resin extracted from trees of the genus Commiphora (such as Commiphora myrrha).

The genus Ornithogalum (meaning bird's milk) has around 180 species with O. umbellatum (common Star-of-Bethlehem) being the type species shown in the photo. Some species are edible, some are poisonous and some have some medicinal use.
9. Which flower of the 'mouse's ear' genus has been a symbol of remembrance over the ages?

There are various stories behind the name. One is of a medieval German knight walking by a river with his lady. He fell in while he picking flowers for her and drowned because of the weight of his armour, but not before shouting "Forget me not!". The flower now bears this name.

The genus Myosotis (meaning mouse's ear) has some 74 accepted species (and potentially up to 500) split mainly between Europe and New Zealand. The name comes from the soft, furry leaves of the plant.
10. The common name for plants in the genus Geranium comes from the shape of the seed on some of the species. Incorporating a body part, what is this name?

The genus Geranium (derived from the Greek for crane) has over 400 species dotted around temperate regions. The plant has an unusual way of distributing its seed - its beak-like fruit capsule (the 'cranesbill') springs open when ripe and catapults the seed away from the plant.

Just to confuse matters, 'geranium' is often the common name given to plants of the genus Pelargonium (which are also sometimes called 'storksbill'). They were once in the same genus. So now you know the answer to the riddle: when is a geranium not a Geranium.

All the answers listed to the question are common names for plants. The photo shows G. pratense (meadow cranesbill).
Source: Author suomy 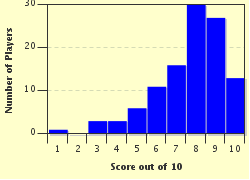 Related Quizzes
1. When the Wind Weeps Easier
2. Flora Prima Donnas Easier
3. Because You're Worth It! Average
4. Springtime Blooms Average
5. Wild and Wonderful Average
6. Flowers for the Shade Garden Average
7. Perennial or Non-Perennial Average
8. Please Don't Eat the Daisies Average
9. Flowers Speak the Language of Love Average
10. Mary Mary, How Does Your Garden Grow? Average
11. A Flower for Helen Average
12. A Stroll Around a Country Garden Average