The Men in Your Garden Trivia Quiz

The botanical names of a number of plants bear the names of men. This quiz is about identifying such plants and trees. Let's see if you know the men in your garden.

Quiz Answer Key and Fun Facts
1. Sharing his surname with a children's author, this Swedish botanist was a student of Carolus Linnaeus, the father of modern taxonomy. Which genus of Mexican flower bears the botanist's name?

National flower of Mexico, the plant was introduced into Europe in 1789 and was named by Abbe Antonio Jose Cavanilles, Director of the Royal Gardens of Madrid after the Swedish botanist Anders Dahl, who had died two years previously.

The dahlia is a family of tuberous herbaceous perennials with a number of different flower forms. Before the Spanish conquest, the Aztecs used the sweet potato-like tubers as a source of food. Diabetics were sometimes given a fruit sugar called Atlantic starch, derived from dahlia tubers, before the advent of insulin. The variety shown in the photo is the dahlia 'Whimsey'.

The children's author was Roald Dahl.
2. Founder of the National Herbarium of Victoria, botanist Ferdinand von Mueller named this nut tree in 1857 in honour of his Scottish friend, a chemistry professor and politician in Victoria. What tree is it?

Native to Australia, there are now four recognised species of this genus. Commercially important for its seed, only two of the species produces nuts that can be eaten raw. Macadamia nuts are high in monosaturated fats and relatively low in protein when compared to the likes of almonds and cashews. They are also toxic to dogs.

John Macadam (1827-1865) was the Scottish-born Australian chemist and politician. He is unrelated to the Scottish engineer John Loudon McAdam, famed for his road making technique and whose name is now associated with tarmacadam (or tarmac).
3. Austrian botanist Leopold Trattinnick decided to name this genus of plants after another Austrian botanist whose name is synonymous with an army. Which plant is the one involved?

Sometimes called plantain lilies or by their Japanese name giboshi, this genus is native to north-east Asia. The plants are toxic to cats, dogs and horses, however slugs, snails, rabbits and deer are quite partial to them. The toxicity is due to the saponins in them so in theory they could be used for making soap, however the amounts are too small.

Nicolaus Thomas Host (1771-1834) was the Austrian botanist honoured. He was also the personal physician of Holy Roman Emperor Francis II.
4. Which genus of flowers bears the name of one of the botanists who accompanied Captain James Cook's first voyage to the Antipodes?

There are around 170 species in the banksia genus, being Australian wild flowers and popular garden plants. The one shown is a woody shrub known as Banksia serrata (also known as old man banksia, saw banksia, saw-tooth banksia and red honeysuckle).

Joseph Banks (1743-1820) was the official botanist on the voyage and was wealthy enough to fund six others to accompany him, including Swedish naturalist Daniel Solander and Finnish naturalist Herman Spöring. The Solandra genus is named after the Swede.
5. Named after the French diplomat who first introduced this "medicinal" plant to the French royal court in 1559, to what genus does this plant belong?

The photo shows N. glauca (known as tree tobacco). N. tabacum is the variety grown commercially for tobacco. Although not particularly known for its medicinal properties, the nicotine from the plant can be used as an insecticide and was also used as a poison in a famous murder case in 1850. A Belgian nobleman poisoned his brother-in-law for the inheritance but got guillotined instead after a chemist developed a technique to prove the presence of the alkaloid poison.

All the names listed are plants celebrating French botanists. Jean Nicot (1530-1600), the man whose name is associated with the plant (and the chemical nicotine), was also one the first to compile a French dictionary.
6. The name associated with this genus of Australian evergreen shrubs honours a young Italian servant with a thirst for botany and a metalloid element to his name. What is the genus?

The photo shows the flowers of Boronia ledifolia (also known as Sydney boronia, showy boronia or ledum boronia), one of some 90 species in the genus. The servant Francesco Borone worked for the botanist Sir James Smith. His thirst for knowledge and standard of work saw him elevated to become Smith's botanical assistant. He was on an expedition in 1794 with another botanist Dr Sibthorpe in Athens when he fell to his death apparently while sleep-walking. Smith vowed to honour him and did so by naming a genus after him in 1798.

A metalloid element shows properties of both metals and non-metals. Of the elements listed, boron and silicon fall into this category.
7. This large genus takes its name from an Illyrian king from the Second century BC of land centred around Albania. Known for its trumpet-shaped blue flowers, it's the yellow one which is recognised for its medicinal properties. Which one is it?

There about 400 species distributed mostly around the alpine areas of Europe, the Americas and Asia. There are some species in northern Africa, Australia and New Zealand. Gentiana have a long history of use in herbal medicine and some are used in a number of apéritifs, liqueurs, and tonics including Gentian, an Alpine distilled beverage which typically uses the root of G. lutea (the yellow gentian).

Lutius was the last Illyrian king, losing his kingdom to the Romans when he chose to change his allegiance to the Macedonians in exchange for the promise of 300 talents. Gentiana is the Greek and Latin name for the plant and was first used in the First century AD. The Roman writer Pliny the Elder records some of the medicinal properties that King Gentius is said to have discovered.
8. Named in honour of German botanist Adam Lonitzer (1528-1586), what is the more common name for the Lonicera genus, which are mostly hardy climbers?

There are around 180 species of Lonicera, which are native to the northern hemisphere. Useful for covering walls and other unsightly man-made structures, some honeysuckles can be in the form of a shrub but are normally a twining bine. It also has a medicinal history. The one in the photo is L. tragophylla.
9. With a bird-like name, to what genus does this locust tree belong?

Part of the Fabacea family (which includes legumes, peas and beans), the Robinia genus consists of deciduous trees native to North America and Mexico. The one shown in the photo is R. pseudoacacia (the black locust or false acacia).

Apart from the flowers, the plant is toxic. The flowers are used in teas and pancakes. The wood of the black locust is very hard, is ground-durable and so has many uses. It also makes good firewood.

Those remembered by the genus were French botanists Jean Robin (1550-1629) and his son Vespasien Robin (1579-1662). Jean Robin introduced the black locust to Europe.
10. What is the name of this genus with a war-like name, despite being named after a Norwegian bishop and botanist?

Varying in size considerably, there are around 60 species. G. tinctoria (known as giant-rhubarb or Chilean rhubarb) is not related to rhubarb and is a major pest in New Zealand and Ireland where it was introduced.

The young plant is eaten in Chile and the root is the source of a black dye, hence the tinctoria part of the name. In some species the leafs can grow up to two metres wide and three metres long on stalks up to two and a half metres long.

Johan Ernst Gunnerus (1718-1773) was the Norwegian bishop with an interest in natural history.
Source: Author suomy 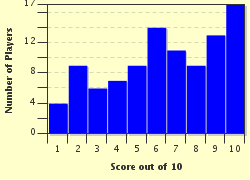 Related Quizzes
1. Which Tree is Me? Tough
2. Which Plant am I? Average
3. Garden Flowers Tough
4. Mary Mary, How Does Your Garden Grow? Average
5. The Language of Flowers Tough
6. Flowers Speak the Language of Love Average
7. The ABC's of Flowers Average
8. Flora Prima Donnas Easier
9. Because You're Worth It! Average
10. Annual or Perennial? Average
11. The Flower Name Game Tough
12. Name the Plant Tough