This is a simple quiz about cottage garden flowers. Most of them are well known, but some of the questions will require a bit of thought and good knowledge of the English language.

Quiz Answer Key and Fun Facts
1. For which of the following flowers is "polyanthus" a common name?

Polyanthus is another name for the primrose or primula. The name "polyanthus" comes from two words meaning "many flowers". My grandmother loved pollies (as she called them) and grew them in several garden plots. The ones she grew in the 1960s had no perfume, but later versions have.
2. One of the following flowers has the old country nickname of "heartsease". Which is it?

The pansy used to be known as heartsease, and that is its meaning in the language of flowers.
3. There is a pretty little flower that shares its name with a musical instrument. Which is it?

The viola, a small relative of the pansy, shares its name with the viola, a relative of the violin. I made up drumflower and harp flower, and flutewood is also made up. The flutewood tree appears in the book "Shadowdancers".
4. If you wanted a bouquet of red, white, and blue, which of the following bunches could you not choose?

Poppies come in red as well as other colours, while daisies are often white and cornflowers mostly blue. Violets are sometimes white, salvia is usually red, and lobelia blue. Polyanthus come in most colours, including red, white, and blue. Roses come in red and white, but no one has managed to breed a true blue yet. The nearest I've seen is a kind of washed-out mauve.
5. Which of the following flowers changes colour from blue to pink according to the amount of acid in the soil?

The hydrangea has this interesting attribute. A pink-flowered specimen can be persuaded to bear blue flowers by changing the PH of the soil. The reverse can also happen.
6. Honesty is a lovely flower. Its blooms are followed by round silvery pods that give it its alternative name of "money flower". Most honesty flowers are purple, but some can also be -?

Believe it or not, purple honesty and its white relative can cross- pollinate to make a delightful striped version. I know this, because my grandmother grew these too!
7. Some flower names can be used for girl children, but there are a few that could be adapted for a boy. Which of the following does not come into this category?

Ragged Robin is a pretty pink flower, and Herb Robert, a tiny geranium, has small purplish-pink flowers. Sweet William is a delightfully scented relative of the dianthus, but Jolly James I made up!
8. There is a flower with a charming name that makes me think of Christmas. However, it doesn't bloom in winter. What is it?

Star of Bethlehem is a pretty pale blue star-shaped flower that grows from a bulb. Christmas Bush has delightful flowers, but they do appear in December. I made up the other two. Another flower that appears in the northern hemisphere's Christmas period is the Christmas Rose, or hellebore. In my country it is often known as the June Rose or Winter Rose.
9. Which of the following flowers once caused a huge panic and made many people bankrupt?

The tulip caused a huge stock-exchange-like disaster in the Netherlands. Known as tulipomania, the panic boom bust brought a great many dealers and breeders unstuck. You can read about tulipomania in the book called "A Basket of Onions".
10. Here is a delightful flower that has a real name reminding me of eagles, and two common names that sound like items of clothing. Is it -

Aquilegia, also known as grannies' bonnets and hooped petticoats, are very pretty and often come in contrasting colours. They are delicate and always attractive. Lady's slipper is a real flower, but I made the others up!
11. Buttercups are beautiful yellow flowers that are usually classed as weeds. However, they have an upmarket relative that is a welcome guest in the cottage garden. What is it?

The ranunculus is a spring-flowering plant that grows from corms. It comes in the same clear yellow as its humble relative, and in other colours as well.
12. This flower is available in several colours, and has one of the sweetest scents around. It is usually grown in pots rather than out in the garden. Its name is Greek, and it is the namesake of a gay character out of Greek myth.

All these really are flowers, and two of them are named after Greek myth characters. However, Narcissus wasn't exactly gay. He was only in love with his own reflection. Hyacinthus was a youth beloved by Apollo, and when he died during a Grecian sports day, Apollo turned him into a flower.
13. This is a flower with a name that is the same as its most prevalent colour.

Violets are usually violet, although you can also get them in white, pink, and pale yellow. Roses are sometimes rose pink, but just as often red, white, yellow or orange. Turquoise is gemstone and not a flower, and an orange is a fruit.
14. Wallflowers are delightful, flowering in winter and adding a sweet scent to their velvety blooms. Why, however, are they named as such?


Answer: They are most often found growing at the base of sunny walls

The simplest explanation is correct - wallflowers simply grow well at the base of sunny, warm walls. The "foreign" etymology is true not for the wallflower but the walnut - in this case, the "wal" is derived from old English "wealh" (foreign). The name "wallflower" for a solitary beauty on a dance is rather derived from the flower, not vice versa.

As for the botanist, finally - I invented him.
15. The rose, beloved of many gardeners, is related to a well-known pie ingredient. What is it?

The rose is related to the blackberry vine. Not only do they share a similar leaf, but the flowers of blackberries are very much like simple roses. And then there are the thorns...
Source: Author Sallyo 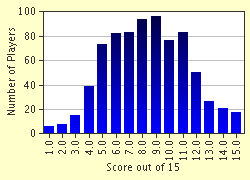