The game of "Tiddlywinks" is much more than simply flipping winks into a pot. It is a game of skill and tactics involving colour rotation and the ability to move winks, sometimes more than one at a time, across the table to cover you opponents winks.

Share on Facebook
Share on Twitter
Share by E-Mail
Author
euphonium
Time
4 mins
Type
Multiple Choice
Quiz #
152,335
Updated
Dec 03 21
# Qns
10
Difficulty
Tough
Avg Score
6 / 10
Plays
299
This quiz has 2 formats: you can play it as a or as shown below.
Scroll down to the bottom for the answer key.

Quiz Answer Key and Fun Facts
1. What is the term used to describe covering an opponent's wink with your own wink?

The squop is the most fundamental shot in "Tiddlywinks". If your wink is covered by anther wink then it can not be played.
2. What term is used to describe a wink that is touching the foot of the pot and so is very difficult to pot?

Although a wink touching the base of the pot is actually vertically beneath the lip of the pot, it is still possible to pot it using a squidger made from material such as a phone card.
3. What is the name given to the plastic disc used to propel a wink?

To decide who plays first a squidge-off takes place. The person who can send their wink closest to the pot with their squidger goes first.
4. What is the term used to describe moving a pile of winks all in one go?

In the UK, Cambridge, Oxford and Southampton Universities play competitive tiddlywinks.
5. What is the term used to describe playing a top wink whilst sending the wink underneath off the table?

You may only play your wink if it is on top of a pile of other winks. However you may follow through in one smooth continuous shot to play your opponents wink underneath.
6. Each player has 4 small winks, but how many large winks?

There are four colours, 24 winks in all.
7. What is the colour order in a game of "Tiddlywinks"?

Tactically the colour order is very important. If you are playing Blue (and Red) and you have a choice of attacking Green or Yellow you would normally choose to attack Green thus allowing Red more freedom to play on his turn.
8. At the end of the game an un-potted wink, not covered by another wink, is worth one, but how much is a potted wink worth?

When playing "Tiddlywinks" properly you will seldom see any winks potted until the final round. Games are won and lost by covering your opponents wink with your wink to ensure that your opponent does not score at all!
9. What is the term used to describe playing your wink on top but potting your opponent's wink which is underneath?

This shot is used when you wish to have your wink flat on the table but you don't want you opponent to have a free wink. You may have all his other winks covered so by potting his wink he is unable to play!
10. What is the penalty for sending ones own wink off the table?


Answer: You lose a turn

Any wink that leaves the table is replaced on the edge of the table. It is often helpful to send your opponents wink off the table. However your opponent does not lose a turn.
Source: Author euphonium

This quiz was reviewed by FunTrivia editor silverginger before going online.
Any errors found in FunTrivia content are routinely corrected through our feedback system.
Most Recent Scores
Dec 14 2022 : Guest 81: 1/10
Dec 12 2022 : Guest 170: 3/10 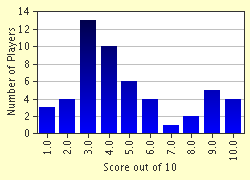 
Other Destinations
Explore Other Quizzes by euphonium