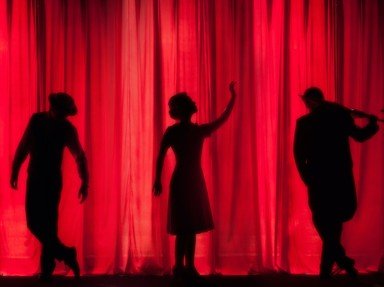 Match each title of a well-known musical on the right to a set of three or four randomly chosen songs on the left. Spans about 10 decades of musical theater. Good luck!
This is a renovated/adopted version of an old quiz by author hope829

The original production of 'Show Boat' opened in the Ziegfeld Theater on Broadway on December 27, 1927 and ran for 572 performances. It was actually an innovative work that had songs integrated with the plot in ways not done before, moving away from the revues of the 1890s-1920s. It combined both the serious and spectacular, departing from operetta and light comedy. It was also the first Broadway musical in which black and white performers sang on stage together, the first one to depict a truly interracial marriage, and the first to have a mixed-race character passing for white. Despite these milestones, 'Show Boat' is also one of the more revised and expurgated shows when it is performed in modern times for its stereotypical depictions of race.

Composer Jerome Kern met lyricist Oscar Hammerstein II had in mind the magnificent bass voice of Paul Robeson -- the first black movie star after appearing in "The Emperor Jones" (1925 -- when they wrote "Ol' Man River"). Alas, he was not available for the Broadway production. Robeson did appear in Universal's 1936 film adaptation, and his performance was unforgettable and definitive. Later in his career, Robeson transformed the lyrics from the lament of a black dockworker resigned to his fate to a powerful anthem for civil rights, and that became his signature song.
2. "Surrey With The Fringe On Top", "People Will Say We're in Love", "Oh! What a Beautiful Morning"

Richard Rodgers composed the music and Oscar Hammerstein II wrote the lyrics to 'Oklahoma!', which debuted on Broadway in 1943. The love triangle between cowboy Curly McLain, farm-hand Jud Fry, and farm-girl Laurey Williams is set in fictional Claremore, Indian Territory, in 1903, four years before the territory would become the 46th U.S. state, Oklahoma. Rodgers and Hammerstein adapted it from a play by Lynn Riggs called 'Green Grow the Lilacs' (1933).

There is a fifteen-minute "dream ballet" in the finale of the First Act that was originally choreographed by Agnes de Mille. (In fact, the legendary dancer choreographed the entire original production!) "Oklahoma!" won a Pulitzer Prize in 1944 and a Special Tony Award in 1993 for its 50th-anniversary production.
3. "Some Enchanted Evening", "Bali H'ai", "I'm Gonna Wash That Man Right Out of My Hair"

Mary Martin and Ezio Pinza starred in the premiere of "South Pacific" at the Majestic Theater on Broadway in 1949. Oscar Hammerstein II and Joshua Logan adapted the musical's book from two short stories, "Fo' Dolla" and "Our Heroine", from James A. Michener's 1947 book, 'Tales of the South Pacific'. Hammerstein wrote the lyrics and Richard Rogers composed the music.

The show received a Pulitzer Prize for Drama and ten Tony Awards including Best Musical, and it was the first to win all four Tony acting categories.

As with 'Oklahoma!', a large number of songs from South Pacific became popular apart from the show. The song "You've Got to Be Carefully Taught to Hate" addressed prejudice against Asians and Pacific Islanders, daring subject matter for its day.
4. "America", "Somewhere", "Gee, Officer Krupke", "Maria"

In this 1957 re-imagination of 'Romeo and Juliet', two young people from rival New York City gangs fall in love, but the conflict between the Jets and the Sharks leads to tragedy. Leonard Bernstein composed the music, Stephen Sondheim penned the lyrics, and playwright Arthur Laurents wrote the book. It was originally conceived by choreographer and producer Jerome Robbins.

The musical was originally going to be an "East Side Story", about a romance between a Catholic boy and a Jewish girl, but when Laurents and Bernstein met at a hotel to collaborate on the project, the headlines about juvenile delinquency and gangs jumped out at them. And with that, it became about conflict between white Americans and newly-immigrated Puerto Ricans. Choreographer Robbins observed a high school dance in a Puerto Rican neighborhood in Harlem and remarked, "They do dances that I've never seen before, evolving their own style and approach". Daring not only in its confrontation of racism, 'West Side Story' was also intended to be the first Broadway show to use the f-word, but not wanting to limit distribution of the soundtrack, Sondheim changed the cursing to "Krup you".
5. "Pick-a-little (Talk-a-Little)", "(Ya Got) Trouble", "Till There Was You", "76 Trombones"

Meredith Willson's 'The Music Man' was a smash when it premiered on Broadway in 1957 and ran for 1375 performances. It won five Tony Awards, including Best Musical -- beating out 'West Side Story'. Robert Preston originated the role of the fast-talking Prof. Harold Hill (which he reprised in the 1962 film, even though Warner Bros. thought he was too old to play opposite Shirley Jones). The character of Marian Paroo was based on a real medical-records librarian, Marian Seeley of Utah, whom Willson had met during World War II. The Beatles recorded "Till There Was You" on their album 'With the Beatles' (1963).

In both the original production and the film adaptation, the bickering local businessmen are played by a Barbershop quartet known as the Buffalo Bills (Bill Spangenberg, Wayne Ward, Al Shea, and Vern Reed), who were the 1950 International Quartet Champions. Here's something that may have escaped notice: the signature song "76 Trombones" uses the same melody as "Goodnight, My Someone", but in a different time signature.
6. "So Long, Farewell", "Climb Ev'ry Mountain", "The Lonely Goatherd", "My Favorite Things"

The heartwarming story of a governess, a baron, and his children won 'The Sound of Music' the 1960 Tony for Best Musical, and Mary Martin as Maria won Best Performance by a Leading Actress in a Musical. When the musical opened on Broadway in 1959, however, the critics panned it! Brooks Atkinson complained in 'The New York Times' that the musical was a throwback: "The scenario of 'The Sound of Music' has the hackneyed look of the musical theater [Rodgers and Hammerstein] replaced with 'Oklahoma!' in 1943...It is disappointing to see the American musical stage succumbing to the clichés of operetta."

Another critic, Pamela Kael of 'McCall's', branded the musical "a sugar-coated lie that people seem to want to eat." The readers of the women's magazine demanded that she be sacked, and she was. Kael got her revenge, however, by finding a position with 'The New Yorker' and becoming one of the world's foremost film critics of the 20th century.

The musical was based on the 1949 memoir of Maria von Trapp, but took a lot of dramatic license. The real-life Maria did not fall in love with Captain von Trapp, but married him for the sake of the children. (Later she grew to love him, though). Maria was also not the one who taught the children to sing; it was Father Franz Wasner, a young priest who visited the family in 1935. The real Maria von Trapp was dismayed to learn that Fr. Wasner was omitted from the show; the writers told her that they could have the priest or Maria, but not both. Unlike the fictional plot, neither Liesl nor any of the other children fell in love with a Nazi. Surprisingly, Maria was actually the taskmistress while Captain von Trapp was the more easygoing one.
7. "We Need a Little Christmas", "Bosom Buddies", "The Man in the Moon"

"Life is a banquet, and most poor suckers are starving to death!" So goes the motto of Mame Dennis, an eccentric Bohemian who takes in her little nephew Patrick and raises him in her own unconventional way. Angela Lansbury starred in the title role and Bea Arthur played her sardonic and somewhat alcoholic best friend Vera when "Mame" premiered on Broadway in 1966. With book by Jerome Lawrence and Robert Edwin Lee and music by Jerry Herman, the musical was adapted from Patrack Dennis's novel and play "Auntie Mame". Lansbury and Arthur won Tony Awards for their performances. In the 1974 film adaptation, Arthur revived her role, but Lucille Ball took over the part of Mame Dennis.

Opening Off-Broadway in 1971, 'Godspell' began as a project by drama students at Carnegie Mellon University. John-Michael Tebelak wrote the first version as his master's thesis, and then it was re-scored by Stephen Schwarz to include pop, rock, gospel, and even vaudeville music. The long-running production has been revived many times. It features the cast dressed as hippie-clowns singing essentially a series of parables from the Gospel of Matthew (plus one or two from Luke), and the entire cast appears on stage the entire show.

The song "Day by Day" was the musical's breakout hit, with a version of it reaching #13 in the U.S. Billboard Hot 100 chart and another version reaching #2 in Australia's Kent Music Report. Musicians of all sorts have covered it, including the Fifth Dimension, Andy Williams, Cilla Black, Cliff Richard, Judy Collins, and the Christian rap/rock group DC Talk. NBC used an instrumental version for a time as the theme for its "Today Show", and it would appear in worship services in some congregations and parishes, especially in "folk Masses", of the 1970s-80s (and beyond). Ben Stiller, groping for words, recited the lyrics when Robert de Niro asked him to say grace in the movie "Meet the Parents" (2000).
9. "Memory", "The Invitation to the Jellicle Ball", "Bustopher Jones"

'Cats' is a sung-through fantasy based on T.S. Eliot's 'Old Possum's Book of Practical Cats'. It premiered favorably at the New London Theatre in the West End in 1981 and with mixed reviews on Broadway in 1982. 'Cats' was the first megamusical, much as 'Jaws' (1975) was the first movie blockbuster, and it set new standards for production, tourability, family-friendliness, etc. The breakout hit "Memory" borrows from a poem that T.S. Eliot never finished, called "Grizabella". The incomparable Judi Dench was all set to play Grizabella in 1981, when she injured her Achilles tendon at rehearsal and had to leave the cast.

'Cats' closed on the West End after 22 years in 2002, making it the longest-running West End show in history (until 'Les Miserables' pulled ahead in 2006). 'Cats' became the longest-running show on Broadway at its 6,138th performance in June 1997. For his poems, T.S. Eliot won a posthumous Tony, tearfully accepted by his wife Valerie Eliot, and the late poet shared the Tony for Best Original Score with Andrew Lloyd-Webber.
10. "You'll Be Back", "The Room Where It Happens", "Say No to This", "Aaron Burr, Sir"

Lin-Manuel Miranda wrote a musical about the life of American statesmsn Alexander Hamilton, the first Secretary of the Treasury, after he read Ron Cherrow's 2004 biography about the Founding Father. There is very little unscored spoken dialogue; the musical is mostly sung or rapped all the way through.

It is an historical piece, but Miranda took a few liberties, such as somewhat overstating Aaron Burr's role in Hamilton's life. The original casting intentionally had Black, Latino, and Asian actors playing white historical figures. Miranda explained, "It's a way of pulling you into the story and allowing you to leave whatever cultural baggage you have about the Founding Fathers at the door." The musical premiered Off-Broadway at the Public Theater in February 2015.

At the 70th Tony Awards in 2016, 'Hamilton' set a new record with 16 nominations, and it won Best Musical and ten other awards. It also won the 2016 Pulitzer Prize for Drama. The original West End production won several Laurence Olivier Awards in 2018. 'Hamilton' is regarded as the first successful major hip-hop musical (and hip-hop as a musical style was about 40 years old at the time).
Source: Author gracious1