For those of us who learned English as our primary language, we take a lot of its quirks for granted. Here are some examples of parts of the English language that are in categories of their own.

Quiz Answer Key and Fun Facts
1. Let's say that you are listening to the news and hear that some Americans were killed by "friendly fire". Which of the following terms best describes "friendly fire"?

Webster's Dictionary describes an oxymoron as "a rhetorical figure in which an epigrammatic effect is created by the conjunction of incongruous or contradictory terms". In other words, the adjective that describes the noun is completely contradictory to the meaning of that noun.

In this example, "fire" means the discharge of weapons (usually bullets) and "friendly" denotes that it is not the weapons of the enemy. In other words, a soldier was accidentally killed by his own troops. However, I still fail to see what is friendly about that.

It may not be hostile, but it isn't very friendly.
2. Which of the following examples is or should be considered a "misnomer"?

We live in a very politically correct society today. One slip of the tongue, especially in public, and you may be branded a racist. However, even in this heightened age of political correctness, there does not seem to be much concern that Cherokees, as well as many other tribes, are actually "Native Americans". Most of the people that consider themselves Americans are certainly not native to this continent. Many have ancestors from Europe, Mexico, or several other countries. However, in 1492, when Christopher Columbus landed in the West Indies, he thought that he had traveled across the ocean and landed in India. This is one of the main reasons that Native Americans are referred to as Indians. If you ask me, Indians are from India. Perhaps the reason that there is not the same outcry about this misnomer is because they do not have an outspoken leader that claims to represent their group or culture? Some Native Americans do not mind being referred to as Indians, but many prefer to be described by the tribe of which they are a member, rather than by any generic term that lumps the different cultures into a single entity.

A misnomer is the act of using a wrong name with regard to contracts, to devises and bequests, and to suits or actions. For this example, we can include people as well.
3. "An expression which has lost its effectiveness due to frequent use and familiarity". Which of the following answers has this definition?

A cliché, in other words, is something that may have been used at one time to describe something, but is now outdated. When is the last time you heard someone say, "Gag me with a spoon?" Unless you are watching "Valley Girl" or some other old 80's movie, I would doubt that you have.

However, I still think that some clichés have a deeper meaning if you can look beyond the generation that it is using it. For example, "Absolute Power Corrupts Absolutely" is considered a cliché but holds a lot of meaning in those four short words. I do not see why that saying should ever lose its effectiveness.
4. A palindrome can only be effective if you are using words.

A palindrome is something when if completely reversed, states the same thing as it did before. For example, "mom" in reverse is still "mom". However, this is not confined to words, as the year 2002 is also considered a palindrome.
5. Which of the following words has a homophone?

Webster's Dictionary describes a homophone as "A word that is pronounced the same as another word, but has a different spelling or meaning or derivation."
The plural of the color gray is grays, but cows do not grays, they graze.
Graze and grays sound exactly alike but have 2 entirely different meanings.
6. What is the difference between a simile and a metaphor?


Answer: Simile makes a comparison while a metaphor describes equivalence

The simile makes a comparison where there are shared attributes between the tenor and the vehicle ("He is like a snake"). A simile contains "like" or "as". The metaphor states a direct equivalence, or identification, between two things ("He is a snake"). Once again, I got this definition from Webster's Dictionary.
7. Regional dialect in the SAME country can give different names to the same thing?

A great example of this is soda OR pop. Depending on where you grew up, you have probably referred to a flavored, carbonated beverage such as "Coca-Cola", as one or the other. You could enjoy the soda or pop with a sub OR a wedge Or a hero OR a grinder. I think that you get the point. ;)
8. You may find words in the dictionary that are not actually considered to be real words. They have a little parenthetical section next to them to explain this. Examples of this are "ain't" and "phat". What is this type of word?

If you break down the contraction "ain't" you will not come up with two words, like ain and not. However, you have most likely used the word "ain't" or have heard it being used. "Webster's Dictionary" is adding slang words all the time followed by a (sl). Technical or specialized slang may be called "jargon".
9. If you capitalize the first letter in a word, it will automatically retain the same meaning.

This is an exception to the rule. However, if you take the word "polish" as in "I polish my furniture" and capitalize it, you have the word "Polish". This describes one's cultural background if one is from Poland.
10. Which is the correct pluralization of the following four words? moose, deer, mouse, and monkey.

I think that concludes that the English language has some quirks in it ;)
Source: Author superferd 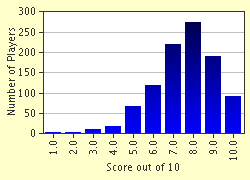