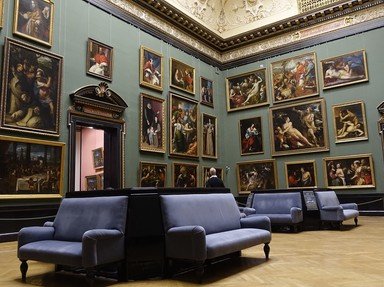 We continue our tour of the world's great galleries at one of the world's most-visited museums, the National Gallery in London. Can you identify some of the most famous works housed there? (A reminder that you can enlarge the photos by clicking on them.)

Quiz Answer Key and Fun Facts
1. Our first exhibit dates to 1470. "Saint George and the Dragon" is one of the most spectacular interpretations of the famous story. This is one of the last works produced by a Late Gothic artist known for his colour and pageantry. Who is the artist?

Born Paolo di Dono in 1397 in the Tuscan commune of Pratovecchio in central Italy, Paolo Uccello is perhaps best known for his series of three paintings depicting the Battle of San Romano. The last name by which he was commonly known, Uccello, derives from his many ornithological paintings.

Uccello painted "Saint George and the Dragon" twice, and the earlier and less dramatic version can be seen at the Musée Jacquemart-André in Paris. The picture tells the whole story, with Saint George still apparently spearing the dragon, even though the princess on the left his already applied a leash so that the body can be dragged back to the city. Note, also, the eye of the storm over Saint George's left shoulder, suggesting that divine intervention assisted the hero.
2. Dating to 1435, "The Arnolfini Portrait" is a famous work by one of the most important Northern Renaissance artists of the period. Painted in oil on three oak panels, this fairly small (33"x24") full-length double portrait is considered one of the most original and complex paintings of early Western art. Who is the Netherlandish artist?

Little is known of the early life of Jan van Eyck, who was born sometime between 1380 and 1395, probably somewhere near the city of Liege in Belgium. Around 20 surviving paintings from the 1430s are attributed to van Eyck, including his most famous work, "The Ghent Altarpiece", that he worked on with his brother, Hubert.

"The Arnolfini Portrait", also known by various other names including "The Arnolfini Wedding", represents Italian merchant Giovanni di Nicolao Arnolfini and, presumably, his wife, in their Bruges home. Not only is the painting unusual from a technical perspective, but it is unique for art historians as the only painting known to record an actual marriage contract.
3. Housed in the National Gallery since 1844, this 1636 work is one of numerous versions of "The Judgement of Paris" painted by this Flemish Baroque artist. The two most famous are the two large versions, this one and another painted two years later that hangs in the Prado in Madrid. Who is the artist?

Sir Peter Paul Rubens was born in 1577 in the city of Siegen, then in the County of Nassau, a state within the Holy Roman Empire, but now within the state of North Rhine-Westphalia in northwestern Germany. A highly versatile artist, Rubens is known for altarpieces, portraits, landscapes and history paintings of both mythological and allegorical subjects. It is for his depiction of voluptuous, usually naked, women, though, that Rubens is best remembered, and from which the term 'Rubenesque' derives.

"The Judgement of Paris" depicts the three goddesses Venus, Minerva and Juno in the left half of the picture, with the hero of Greek legend Paris accompanying the Roman God Mercury on the right. This particular painting depicts the point in the story where the golden apple is awarded.
4. Presented to the National Gallery in 1934, "The Graham Children" is a 1742 portrait of the family of Daniel Graham, King George II's apothecary. Although an accomplished portraitist, this artist is perhaps best-known as a cartoonist and pictorial satirist. Who is the English artist?

William Hogarth was born in London in 1697. An engraver by trade, Hogarth is perhaps best-known for his collection of six scenes titled "A Harlot's Progress" and its 1735 sequel, "A Rake's Progress". He was also a highly accomplished portrait painter, and many of his works in this field can be seen in galleries around the world: his "David Garrick as Richard III" is housed at the Walker Art Gallery in Liverpool, "William Jones, the Mathematician" hangs in the National Portrait Gallery, and "The Shrimp Girl" can also be seen at The National Gallery.

"The Graham Children" shows from left to right, Thomas (just two years old when this was painted), Henrietta, Anna Maria and Richard. Sadly, Thomas had died before the painting was completed. Standing more than five feet high, the painting presents the children at life size, surrounded by the plush furnishings that reflect a wealthy upbringing.
5. Previously housed at the Tate Gallery, "Miss La La at the Cirque Fernando" was returned to the National Gallery in 1950. Set at the Cirque Fernando in Montmartre in northern Paris, the painting depicts the celebrated acrobat hanging on a rope by just her teeth. Which of the great Impressionists was the artist?

Born Hilaire-Germain-Edgar De Gas in Paris in 1834, Edgar Degas is renowned primarily for his paintings of horse-racing and ballet. He began painting historical scenes, but the founding of the Impressionist movement in the 1860s, of which he was a leading light, changed the course of his painting life.

More than half of Degas's paintings depict dancers or performers of some sort, and although he is usually regarded as an Impressionist, he always preferred the term 'realist', observing "no art was ever less spontaneous than mine..."
6. The artist painted two very similar versions of "Virgin of the Rocks", both more than six feel high. The version on display at the National Gallery is the latter of the two, painted between 1495 and 1508, some 15 years after the original, which hangs in The Louvre. Who is the Early Renaissance artist?

Leonardo di ser Piero da Vinci was born in 1452 in the Florence suburb of Vinci. A true polymath and a master of just about everything to which he turned his hand, he was a genius not only of his own generation but one of the most talented men of all time.

The "Virgin of the Rocks" (also called "Madonna of the Rocks") was originally commissioned for the altarpiece of the Confraternity of the Immaculate Conception in Milan. The painting depicts the moment in the life of the young Jesus when he meets the infant John the Baptist, accompanied by an angel, on the road to Egypt. It is not as well known as the "Mona Lisa" or "The Last Supper", but "Virgin of the Rocks" still ranks as one of da Vinci's most famous works.
7. We fast-forward almost four centuries to another work that has multiple versions, "Wheat Field with Cypresses" painted in 1889. Another almost identical version hangs in the Metropolitan Museum of Art in New York. These were painted in the Saint-Paul-de-Mausole mental asylum near Arles on France's Mediterranean coast. Who is the artist?

Vincent Willem van Gogh was born in 1853 in the town of Zundert in southern Netherlands. A master of still life paintings and portraits, many of them of himself, van Gogh is probably best-known for his landscapes.

Van Gogh was a voluntary patient at the Saint-Paul-de-Mausole asylum for a year beginning in May 1889. It was while there that he completed one of his most famous works, "The Starry Night". In June 1889, inspired by the view of the Alpilles mountains from his sanctuary window, he painted the two large versions of "Wheat Field with Cypresses", along with a smaller version that is currently in a private collection, and a pen drawing of the same scene that is now housed at the Van Gogh Museum in Amsterdam.
8. Once part of one of the great royal art collections of Europe, owned by the Duke of Orleans, "The Origin of the Milky Way" was painted in the late 1570s. Who is the Renaissance artist from the Venetian School?

Born Jacopo Comin in Venice in 1518, Tintoretto painted works mostly for Venetian churches, notably the church of the Madonna dell'Orto and the Basilica di San Giorgio Maggiore. His version of "The Last Supper", painted in the early 1590s, can still be seen at the latter today.

"The Origin of the Milky Way" depicts the delivery of the infant Heracles to the Goddess Hera, sister of Zeus. Legend claims that he suckled so strongly that she pushed him away and her milk sprayed out, creating the Milky Way.
9. Many artists have painted their interpretation of "The Adoration of the Magi". This variation on that theme is a 1564 oil on panel by a Netherlandish Renaissance painter and printmaker probably best-known for his genre paintings. Who is the artist?

Pieter Bruegel was born in 1525 in the city of Breda, then within the Duchy of Brabant and now in the southern Netherlands. Most of his paintings depict peasant scenes populated with numerous small figures: his "Flemish Proverbs" (or "Topsy Turvy World"), which is part of the collection at the Gemäldegalerie in Berlin, is a classic example. The Kunsthistorisches Museum in Vienna houses the largest collection of Bruegel's work.

Bruegel's "The Adoration of the Magi" is the first of his paintings containing only large figures. This allows the artist to concentrate on each individual figure's reaction to the events, something not usually seen in the more traditional, Italian versions of this subject.
10. We've reached the end of our selection of great works from the National Gallery in London, and yet we have barely scratched the surface. "The Cornfield", a 56"x48" masterpiece dating to 1826 typifies both this wonderful collection and the work of which iconic English Romantic painter?

John Constable was born in 1776 in the village of East Bergholt in southern Suffolk, just north of the Essex border. Synonymous with the county, often today referred to simply as "Constable Country", his landscapes are today amongst the most popular of all English paintings. His best-known work, "The Hay Wain", also hangs in the National Gallery.

Although known as "The Cornfield" now, Constable himself always referred to this painting of a lane leading south from East Bergholt towards Dedham on the Essex side of the county line as "The Drinking Boy".
Source: Author EnglishJedi 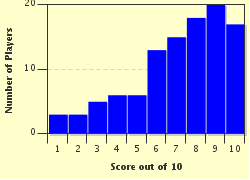