This is a quiz based on the musical 'Jekyll and Hyde'. Many of the questions are from the Broadway production. If you have seen the show, you should have no trouble with this quiz. :)

Quiz Answer Key and Fun Facts
1. Who wrote the music for 'Jekyll and Hyde'?

Frank Wildhorn is responsible for the music in 'Jekyll and Hyde', 'The Scarlet Pimpernel', and 'The Civil War'.
2. In the BROADWAY production of 'Jekyll and Hyde', what is the amount of his 'newly fused formula' that Dr. Jekyll injects into his arm?

In the concept recording of 'Jekyll and Hyde', Dr. Jekyll calls his formula 'HJ7'.
3. Which of the following members of the original Broadway cast remained in his or her role though the show's closing?

George Merritt played Dr. Jekyll's friend and confidante, Dr. John Utterson.
4. In the Broadway production, who is the last person Mr. Hyde kills before his own death?

Hyde kills Simon Stride at his and Emma's wedding before he himself is killed by Utterson's sword.
5. Complete this phrase: 'A rose by any other name...'


Answer: The perfume and the prick's the same!

These lyrics are from the song 'Bring on the Men', which was taken out of the show for the Broadway production, but later put back in for the touring production of the musical.
6. Who recorded the role of Jekyll and Hyde in the 2 CD concept recording of the musical?

Colm Wilkinson recorded the role on the 1990 highlights recording, and Robert Cuccioli can be heard on the Broadway cast recording.
7. What is the name of the East End tavern where Lucy works?

8. Which song did not appear in the touring production of 'Jekyll and Hyde'?


Answer: No One Knows Who I Am


Answer: The Bishop of Basingstoke

Hyde kills the bishop and sets his body on fire after he catches the bishop with a prostitute in London's East End.
10. Which character has the last lines in the musical?

Emma softly sings to Jekyll as he dies in her arms at the end of Act II.
Source: Author musettae 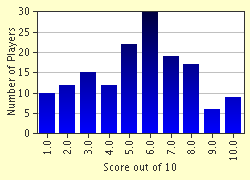 
Other Destinations
Explore Other Quizzes by musettae