A dark, thrilling show about a determined doctor whose experiment to separate evil from good goes horribly wrong...and causes a few problems in his love life, too! How much do you know about one of my favorite shows?

Share on Facebook
Share on Twitter
Share by E-Mail
Author
Lucy_Christine
Time
5 mins
Type
Multiple Choice
Quiz #
34,139
Updated
Dec 03 21
# Qns
25
Difficulty
Average
Avg Score
16 / 25
Plays
1334
This quiz has 2 formats: you can play it as a or as shown below.
Scroll down to the bottom for the answer key.

Quiz Answer Key and Fun Facts
1. Here's an easy one to get you started: What are the names of the two main women in Jekyll's life (in the Broadway production)?

Emma Carew, Jekyll's fiancee, and Lucy Harris, the prostitute Jekyll is kind to, who is also Hyde's mistress.
2. What is Jekyll's main reason for wanting to separate the good from the evil in man?

'I will find the answer...I'll never desert you - I promise you this 'til the day that I die. Goodnight, Father.'
3. Who was the original Dr. Jekyll and Mr. Hyde on Broadway?


Answer: prostitute and singer at a bar

Rebecca Spencer was the first to ever play Emma. Colleen Sexton was the most recent Lucy on Broadway. Annie Barthiamue played Lucy on the national tour (non-Equity tour).
6. What song do Lucy and Emma sing together?

Lucy sings both 'Someone Like You' and 'Sympathy, Tenderness'. Lcu and Nellie sing 'The Girls of the Night'.
7. What does Lucy not toast in the song 'Lucy Meets Jekyll'?

'Here's to the night! Here's to romance...to those unafraid of taking a chance!' Hyde also makes this same toast to Lucy in 'Lucy Meets Hyde'.
8. What passionate song do Lucy and Hyde sing together?


Answer: 'It's A Dangerous Game'

Jekyll and Emma sing 'Take Me As I Am'. Jekyll sings 'This is the Moment'. Hyde sings 'Alive'.
9. The first time Lucy kisses Jekyll, why does she do it?


Answer: Out of gratitude for helping her

At first, Lucy only kisses Jekyll because she is thankful that Jekyll helped her after Hyde beat her. Then she realizes she has feelings for him and kisses him out of passion.
10. Finish this lyric: 'Love is worth forgiving for, now I realize - everything worth living for....'


Answer: is there in his eyes

From 'In His Eyes', sung separately and simultaneously by Lucy and Emma about their love for Jekyll.
11. Which actor who played the roles of Dr. Jekyll and Mr. Hyde on Broadway was the first to sing the music several keys higher, which is how it was originally written?

All are Jekyll and Hyde leading men, but rock singer Sebastian Bach, his voice used to years of singing heavy metal, was the only one able to hit those high notes with ease!
12. Which of the following Jekyll and Hyde characters are not on the Board of Governors at St. Jude's Hospital?

Henry Jekyll must go to the Board to ask permission to continue with his research, so he can't be on the Board!
13. Who is Hyde's first victim?


Answer: the Bishop of Basingstoke

Though all of these are killed by Hyde, the Bishop is the first. Hyde finds him with a teenage prostitute and mocks him for his hypocrisy. He then kills him and sets his body on fire while singing the 'Alive!' reprise at the end of the first act.
14. Why does Hyde kill Lucy?


Answer: he is jealous of her love for Jekyll

Hyde see Lucy with a letter from Jekyll telling her to leave London and giving her money to do so. He sings a reprise of 'Sympathy, Tenderness' to her as he viciously stabs her to death.
15. Who is killed at Jekyll's wedding?

Jekyll suddenly transforms into Hyde without warning and breaks Stride's neck.
16. What are Jekyll's final words?

Emma cradles the dying Jekyll in her arms as he says her name and dies.
17. Who composed Jekyll and Hyde?

Andrew Lloyd Webber wrote 'the Phantom of the Opera', 'Cats', 'Evita', 'Jesus Christ Superstar', and others. Leonard Bernstein wrote 'West Side Story'. Frank Ebb wrote 'Cabaret' and 'Chicago'.
18. Which Jekyll and Hyde leading lady is married to the composer?

19. How long has Jekyll been working on the good and evil project?

'Seven years ago I started out on this alone, now it's alone I'll see it through to its conclusion!'
20. Which early Jekyll and Hyde leading man has also played the leads in 'The Phantom of the Opera' and 'Les Miserables'?

How anyone could walk out of Les Miz is beyond me!
22. Who wrote the lyrics to Jekyll and Hyde?

Wildhorn wrote the music, Webber wrote Phantom, and Rice did lyrics for Jesus Christ Superstar, among others.
23. What original Broadway cast member's debut solo album did the composer produce?

His wife, of course!
24. Which song was on both the original Broadway cast recording and the 1995 concept recording?

'Lucy Meets Hyde' and 'The World Has Gone Insane' were on the concept album but not the cast album, as well as 'The Girls of the Night', 'Lucy Meets Jekyll', 'Board of Governors', and several others. 'Good 'N' Evil' is on the cast album.
25. How many people does Hyde kill in the whole show (Broadway production)? 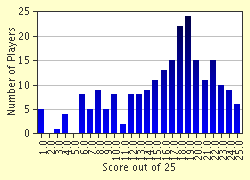 
Other Destinations
Explore Other Quizzes by Lucy_Christine