This is a quiz on the most influential or renowned actors and producers from the 19th Century. Enjoy!

Quiz Answer Key and Fun Facts
1. In England, William Charles Macready (1793-1873) influenced both acting styles and directing methods. In acting, he combined the dignified restraint of John Kemble with the unpredictable passion of Edmund Kean to arrive at a quieter, more natural reading of texts that included famously long pauses for reflection. Which of the following directing techniques did he use?


Answer: blocking the actors instead of letting them find their own places

Macready was one of the first directors to think of the production as a whole. He blocked his actors on the stage for theatrical effect. He also maintained a high standard of historical accuracy in his productions. Macready managed both the Covent Garden and Drury Lane theaters.
2. William Charles Macready and Edwin Forrest (1806-1872) were premiere talents in their respective countries. Macready epitomized the restraint and poise of British acting. Forrest embodied the physical heroism of American acting. In 1849, the two actors were playing the same role in separate productions in New York City. Forrest's fans tried to disrupt Macready's performance, and a riot broke out. What character were these actors playing?

The actors had very devoted fans. When they clashed it turned into the Astor Place riot and resulted in several deaths.
3. Which of the following innovations in theatre design can be attributed to Mme. Vestris (1797-1856)?

Mme. Vestris, a performer herself of light comedy and burlesque fare, managed the Olympic Theatre in the 1830s. She was the first theatre artist to popularize the box set, which shaped the stage into actual rooms equipped as in real life. Previously, most sets were flat paintings or drops.
4. Charles Kean (1811-1868) was an enthusiast for pictorial realism and period costumes. In productions of Shakespeare's plays, he often cut the text in order to allow for more extravagantly visual scenic designs.

Because Shakespeare's plays change time and place so often, if Kean had been true to the texts while incorporating his extensive designs, more time would have been spent in scene changes than in actual performance. To solve the problem, he just cut and restructured the plays to keep them in the same locations for longer.
5. Marie Wilton (1839-1921) managed the Prince of Wales and Haymarket theatres and married Squire Bancroft (1841-1926), an actor in her company. Together, they changed what aspect of going to the theatre?

The Bancrofts replaced bench seating with chairs, established the system of numbering seats and providing reservations, and effectively replaced the gallery level with the orchestra as the coveted seating area.
6. What Frenchman originated a system of training for actors based on the theory that specific body motions, postures and gestures convey specific emotions, and that those elements can be scientifically applied to performance?

The system developed by Francois Delsarte (1811-1871) was based on the Holy Trinity and was in systems of threes. The Trinity of Human Experience, for example, consisted of Physical, Mental, and Spiritual. Delsarte's work changed acting in that each actor could approach the role in his own way, rather than simply imitating previous performances. On the other hand, performances became more mechanistic and less impulsive.
7. Sarah Bernhardt (1844-1923) achieved huge fame despite a shrill, raspy voice.

Bernhardt's voice was actually one of her greatest assets. It was likened to a "golden bell" and described as the "silver sound of running water". Bernhardt, also known as the "divine Sarah", was one of the biggest stars in the era. She toured in Europe and America.
8. Eleanora Duse (1859-1924), an Italian actress in competition with Sarah Bernhardt, performed with a presentational acting style.

Bernhardt was actually the presentational actress, following the methods of Delsarte. Duse was a representational actress who displayed emotional depth through subtle gesture and expression. She supposedly refused to wear makeup for performance, and could blush or pale at will.
9. The African Company (1821-1823) was a company of African-American actors. The company often performed in native dialect and speech rhythm, even when doing Shakespeare. The company disappeared after 1823 because it was so often harassed by white rowdies and was unable to successfully perform for the real audiences. One actor emerged from the company to become a star in Europe. What was his name?

Aldridge (1807-1867) moved to England at the age of 17 to find work and became well known for his fine work as both a comedic and dramatic actor. Aldridge also introduced psychological realism in acting to Europe.
10. Edwin Booth (1833-1893) was one of the finest American actors of his time. In 1863, he set a record 100 performances of "Hamlet" at New York City's Winter Garden Theatre. Was this famous Booth related to that other Booth who assassinated President Lincoln?

Edwin and John Wilkes were brothers. The brothers and their father Junius Brutus were all actors, but Edwin was considered the best. Edwin, who did not share his brother's political views, made many innovations in American theatre, including the use of hydraulics, "free plantation" scenery, and box sets.
Source: Author rj211

This quiz was reviewed by FunTrivia editor agony before going online.
Any errors found in FunTrivia content are routinely corrected through our feedback system.
Most Recent Scores
Jan 18 2023 : Guest 83: 4/10
Dec 14 2022 : jogreen: 3/10 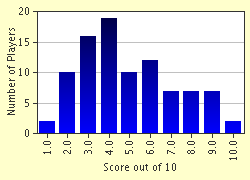