Which Cat Am I? Trivia Quiz

This quiz is all about the wonderful feline characters in the show "Cats". I'll describe a cat and all you have to do is figure out who I am.

Quiz Answer Key and Fun Facts
1. I'm a marmalade tabby cat. My owners call me a gumbie cat because they think I do nothing but sit around and sleep all day, but once they go to bed I spend the night trying to teach the mice better manners and productive ways to spend their time.

Jennyanydots is the first contestant we meet, appearing in "Old Gumbie Cat".

"But . . .
When the day's hustle and bustle is done
Then the Gumbie Cat's work is but hardly begun
And when all the family's in bed and asleep
She tucks up her skirts to the basement to creep
She is deeply concerned with the ways of the mice
Their behaviour's not good and their manners not nice
So when she has got them lined up on the matting
She teaches them music, crocheting and tatting"
2. I'm a big fat cat with a glossy black coat and white paws. Respected by all, I'm a cat of leisure and I spend my time in the gentleman's clubs around St James.

"Bustopher Jones : The Man About Town" is the fourth 'competion' song.

"Bustopher Jones is not skin and bones
In fact, he's remarkably fat
He doesn't haunt pubs - he has eight or nine clubs
For he's the St. James's Street Cat!

He's the cat we all greet as he walks down the street
In his coat of fastidious black
No commonplace mousers have such well-cut trousers
Or such an impeccable back"
3. I'm a very active, efficient, orange tabby cat. I live on the night mail train and supervise things to make sure everything runs smoothly. When it's time for my big number I slip on a brown waistcoat with my trusty pocket watch.

"Then he gave one flash of his glass-green eyes
And the signal went "All Clear!"
They'd be off at last to the northern part of the Northern Hemisphere!

Skimbleshanks the Railway Cat
The Cat of the Railway Train
You might say that by and large it was me who was in charge
Of the Sleeping Car Express
From the driver and the guards to the bagmen playing cards
I would supervise them all more or less"
4. I'm a handsome black tom with leopard spots on my chest. I have a reputation of being a rather curious yet contrary cat. I'm a bit of a flirt but, hey, the ladies love it.

ALW created the part of Rum Tum Tugger as a tribute to Mick Jagger.

He is the second competitor with his self titled song "Rum Tum Tugger".

"The Rum Tum Tugger is a curious cat
And there isn't any call for me to shout it
For he will do as he do do
And there's no doing anything about it!

The Rum Tum Tugger is a terrible bore
When you let me in, then I want to go out
I'm always on the wrong side of every door
And as soon as I'm at home, then I'd like to get about
I like to lie in the bureau drawer
But I make such a fuss if I can't get out"
5. I'm an orange, black and white tabby. With my partner in crime, I am best known for my talent for creating mischief where ever I go but I am also a rather accomplished cat burglar.

"Mungojerrie and Rumpleteazer" sing their duo after Bustopher making them the fifth and sixth cats.

Eliot's poem, and thus the song, implies that both of these characters are male - "they were plausible fellows, and liked to engage a friendly policeman in conversation" but Rumpleteazer is usually portrayed as a female.

"If the area window is found ajar
And the basement looks like a field of war
If a tile or two comes loose on the roof
(Which presently fails to be waterproof)
If the drawers are pulled out from the bedroom chest
And you can't find one of your winter vests
If after supper one of the girls
Suddenly misses her Woolworth pearls
The family will say, "It's that horrible cat!
It was Mungojerrie or Rumpelteazer!"
And most of the time they leave it at that"
6. I'm a large, brown cat with a shaggy coat. I've had many wives and children and I'm known for the wisdom I've gained over a long life. I have a most difficult decision to make.

"Old Deuteronomy" introduces us to our eighth cat but he is the judge not a competitor.

He is the leader of the Jellicle Cats and is the one who must make the choice on which one of the cats can ascend to the Heaviside layer and be reborn.

Old Deuteronomy's buried nine wives
And more - I am tempted to say ninety-nine
And his numerous progeny prospers and thrives
And the village is proud of him in his decline"
7. I'm a small, young, black and white tom. I have some of the hardest dance moves to perform but do them so well you might say there was magic involved.

"Mr Mistoffelees" is our fourth competitor from Act Two.

Though the lyrics definitely state him as being totally black this would have presented lighting problems on stage so the white has been added to his costume.

His character is unusual in that some productions have him singing a lot and others nearly nothing. This is because the choreography for his part is so difficult that the ability to dance, rather than sing, is of higher value.

"Oh! Well I never! Was there ever
A cat so clever as magical Mr. Mistoffelees!

He is quiet and small
He is black
From the ears to the tip of his tail
He can creep through the tiniest crack
He can walk on the narrowest rail"
8. I am now old, thin, frail and shabby and my paws shake. I don't mind though, 'cause I have some wonderful memories that I love to share with anyone who is willing to listen.

Gus, or Asparagus to give him his full name, is the first competitor in Act Two.

He has two songs : "Gus : The Theatre Cat", his introduction by Jellylorum, and "Growltiger's Last Stand", his memoir of one of his favorite parts.

"His coat's very shabby
He's thin as a rake
And he suffers from palsy that makes his paw shake
Yet he was in his youth quite the smartest of cats
But no longer a terror to mice or to rats
For he isn't the cat that he was in his prime
Though his name was quite famous, he says, in his time
And whenever he joins his friends at their club
(Which takes place at the back of the neighbouring pub)
He loves to regale them if someone else pays
With anecdotes drawn from his palmiest days"
9. I'm a ginger cat with red, white and black stripes. I'm very tall and thin and quite physically unkempt but I have quite remarkable skills in certain areas, including hypnosis and levitation.

We meet the villain of the piece third in the Second Act - "Macavity : The Mystery Cat"

Macavity is a master criminal - responsible for many crimes without ever being caught. In the musical he kidnaps Old Deuteronomy.

"Macavity's a ginger cat
He's very tall and thin
You would know him if you saw him for his eyes are sunken in
His brow is deeply lined in thought
His head is highly domed
His coat is dusty from neglect
His whiskers are uncombed
He sways his head from side to side
With movements like a snake
And when you think he's half asleep
He's always wide awake!"
10. I'm now a very old grey cat but in my youth I was a glamorous, beautiful creature who longed for adventure. Now I just want acceptance and a second chance.

We actually meet Grizabella third in "Grizabella: The Glamour Cat" and then again at the end of Act One when she crashes the Jellicle Ball because she thinks she deserves the chance to compete. Her famous competition piece is the last to be heard.

Though Grizabella is a major character in the musical she is not from Eliot's "Old Possum's Book of Practical Cats" like the rest of the cats.

Her emotional appeal in "Memory" is heard by Deuteronomy and he chooses her to be reborn.

"Memory
All alone in the moonlight
I can smile at the old days
I was beautiful then
I remember the time I knew what happiness was
Let the memory live again"
Source: Author Midget40 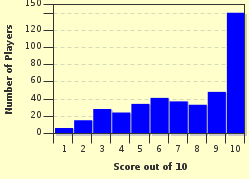 These musical quizzes contain questions about characters, the plot or songs sang


Other Destinations
Explore Other Quizzes by Midget40