I'll give you a quote, and you say who said it. Simple enough, right?

Nemo didn't want Marlin to act as protective as he had at the petting zoo, where it sounds like there was an incident with a "charging" snail.
3. Which of the kids at school said "I'm H2O intolerant"?

When the kids noticed Nemo's "lucky fin", they all pointed out their own problems.
4. Who said the following quote, and to what were they referring? "Hey, look! Balloons! It really is a party!"

These mines later explode and Dory thinks the party is over.
5. Who said, "I'm having fish tonight"?

The smell of Dory's blood sent him into a normal mode, and he wanted to eat fish again.
6. "Sorry, you'll have to come back later, we're trying to escape." Who said this, and to whom?

Dory has to be my favorite character for adding humour, such as this line.
7. Who says "Oh, here's something. 'Es-cap-e', I wonder what that means. It's funny, it's spelled just like the word 'escape'"?

This is yet another of my favorite lines from Dory. This is when Marlin finds out that she can read human.
8. Who says, "root canal, and from the look of those x-rays, it's not going to be pretty"?

The aquarium fish seem to be very interested in the dentist's work, and know all about it.
9. Who says, "Calm down. Now, alternate wiggling your fins and your tail"?

Nemo gets himself stuck in the pipe, and everyone rushes to help him out. Then Gill appears and tells him to get out on his own, even though he has a bad fin, because Gill's bad fin has never stopped him from doing anything.
10. Who says, "A sea monkey has my money"?

She says this while sleeping in the mask.
Source: Author tweetyiscool 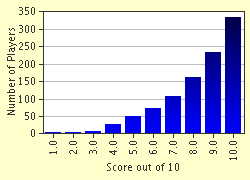 
Other Destinations
Explore Other Quizzes by tweetyiscool