Have You Seen 'Finding Nemo' Yet? Quiz

This is a quiz about the characters in "Finding Nemo". I would recommend this movie for people of all ages! I hope you enjoy my quiz.

Quiz Answer Key and Fun Facts
1. Which female comedian is the voice of Dory?

She died in the beginning of the movie. This was a sad part because all but one of their eggs were eaten.
3. What did Gill name Nemo after he was accepted into the club?

Nemo had to swim across a flow of bubbles in order to be in their club.
4. What is Crush's son's name?

He joined Nemo's class at the end of the movie.
5. What is the name of the dentists' niece?

Darla killed the last fish she owned so all the fish helped Nemo escape.
6. What is Deb's sisters' name?

Flo was actually her reflection on the glass. She could not find her when the tank was dirty.
7. What is the name of the shrimp creature in the aquarium?

Jacques likes to clean everything and everyone. He had to clean Nemo when he went into the tank.
8. Which fish lived in the aquarium with Nemo and was from the ocean also?

Gill's fin was damaged and he had cuts on his face. He looked evil but was really nice to Nemo.
9. Which fish in the tank loved bubbles?

He would always go to a treasure chest that produced bubbles. He would claim them as his bubbles.
10. It says the dentist's last name on the goggles.

We find out his last name is Sherman. He was going to give Nemo away to Darla. Thank you for playing!
Source: Author JessTheBest 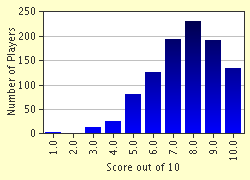 
Other Destinations
Explore Other Quizzes by JessTheBest