Pixar has done it again! I thought this was a fantastic movie. Enjoy the quiz.

Quiz Answer Key and Fun Facts
1. What kind of a fish was Nemo?


Answer: She had short-term memory loss

I thought Dory (Ellen Degeneres) was hilarious. She made the movie. Her short-term memory loss made it that much funnier.
3. What was the name of Nemo's father?

Marlin was voiced by Albert Brooks.
4. What had happened to Nemo that made his dad go searching for him?


Answer: He was captured by a scuba diver

In Nemo's quest to show his dad that he could be independent, he ventured too far out into the ocean and was captured by a scuba diver and later placed in a fish tank in a dentist's office.
5. What was going to eventually happen to Nemo unless his dad could rescue him?


Answer: He was going to be the pet of the dentist's niece

He was going to be the pet of the dentist's scary niece, Darla. Darla reminded me of Sid in the "Toy Story" movies. The last pet fish of hers ended up dying from being shaken too hard by the little brat.
6. What country did Nemo's dad have to go to in order to rescue his son?

The man who caught Nemo was a dentist in Sydney, Australia.
7. How old did Crush say he was?

Crush was the 150 year old sea turtle that helped Marlin and Dory cruise the East Australian Current to get to Sydney where Nemo was.
8. How did Dory almost die?


Answer: She was stung by jellyfish

Although she was swallowed by a whale in the movie, it did not almost kill her. She got stung by jellyfish when she and Marlin tried to go over the trench instead of through it.
9. Nemo escapes toward the end of the movie.

After a wild event in the dentist office, Nemo escaped the fish tank and the dentist via the rinse bowl.
10. What happened in the end that showed Nemo's dad that Nemo could take care of himself?


Answer: Nemo helped the other fish break out of a fisherman's net

Dory and a bunch of other fish got caught in a fisherman's net. After arguing with Nemo about what to do, Marlin realized that he needed to let Nemo do what Nemo thought he needed to do to escape. Once he did this, Nemo and the other fish escaped and lived happily ever after.
Source: Author bruinboy 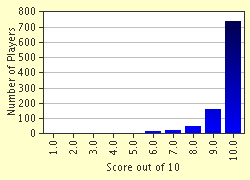 
Other Destinations
Explore Other Quizzes by bruinboy