"Finding Nemo" was a fantastic movie and if you haven't seen it yet, you better go out and see it!

Quiz Answer Key and Fun Facts
1. As the movie starts we see Marlin with Coral. After a bit of talking we see their eggs and they start to name some of them. Soon, a large fish comes and kills Coral and eats all of their eggs. Except one. This egg becomes Nemo. Who had the idea for the name Nemo?

Nemo was the only surviving child of Marlin and Coral.
2. We now skip to a few years later and it is Nemo's first day of school. From this scene we see that Marlin is now very scared of the ocean after what happened a few years earlier. Just before Marlin and Nemo leave, they check Nemo's broken fin. What have they nicknamed his broken fin?

Nemo was born with a slightly different fin. It looks slightly torn and it is also smaller than his other fin.
3. After finally getting to school, Marlin chats with some parents while Nemo meets his classmates and teacher. What is the name of Nemo's school teacher?

Mr. Ray is a scientist and an Eagle Ray.
4. After Nemo and his classmates go out on a field trip, Marlin finds out where they are going and he swims after Nemo. After finally getting to Nemo, he finds him at 'the drop'. Nemo became angry with his Dad, and swam out to touch the boat, just to annoy his Dad. Some scuba divers swam along and put Nemo into a bag. One of the divers leaves their mask behind. What is written on the mask?

Later on in the movie Dory recites this many times.
5. Now that Nemo has been taken, Marlin gets frantic and starts swimming out after the boat but soon loses sight of it. He then swims around and bumps into a blue fish called Dory. Dory starts to show Marlin the way the boat went, but then asks why Marlin is following her. What does Dory suffer from?

Dory says it is hereditary.
6. After some more swimming Dory and Marlin bump into a gang of sharks. After being taken back to their 'club house' they are told it is 'bring a fish to club' day. What is this club's motto?


Answer: Fish are Friends, Not Food

But soon one of the sharks starts a rampage and tries to eat the fish.
7. After Dory runs into Marlin there is a little blood. Bruce the shark smells it and goes on a rampage and tries to eat Marlin and Dory. After swimming away, the bombs around the submarine go off and it is blown away. When we see the screen again, we see that the submarine is hanging off the cliff and then soon tips off. After going down into the darkness they come across a giant fish. What type of fish is this?

The Angler Fish soon tries to eat Marlin but seems to ignore Dory!
8. After escaping the fish, Marlin and Dory come across a group of small fish. The fish won't talk to Marlin but offer Dory respect. After taking a lot of pictures, they give the pair some advice about their journey. What is this advice?


Answer: "Don't swim over the trench, swim through it"

But in the end they go over it anyway.
9. After arriving at the crack, Marlin thinks it looks scary and baits Dory to go over it with him. Once they come through the top, they stumble across some dangerous creatures. What are these creatures?

Dory gets caught and Marlin rescues her out of the jellyfish.
10. After getting attacked, the pair finally get away and find the current that will take them to Sydney. After waking up from being unconscious, Marlin meets a sea turtle and asks his age and name. He tells him his name is Crush. How old is Crush?

Earlier in the movie, Nemo wondered how old sea turtles live to and Marlin said if he ever meets one he'll ask him.
11. After leaving the current and finally arriving in Sydney, we go over to Nemo's side. We find that Nemo is in a fish tank and in the morning being taken home by his owners niece: Darla. To avoid this fate one of the fish in the tank, Gill, makes a plan in which Nemo almost gets killed. Another member of the fish tank is a starfish what is the starfish's name?

Nobody can understand what he says unless he peels himself off the side of the fish tank first.
12. After trying to find their way to Sydney Harbour, Dory tries to asks directions but it turns out to be a whale and they both get eaten. After a little while the whale fills its mouth with water and starts to swallow Marlin and Dory. But they manage to get out. How do they get out?


Answer: The whale blows the water with them out

The whale ends up bringing them to Sydney!
13. After Nemo and Marlin are almost reunited, they are knocked out the window and back into the ocean. Soon Darla arrives and tries to take Nemo. But Nemo pretends to be dead and gets flushed down the spit sink and out into the ocean. Dory runs into Nemo but doesn't remember who Nemo is. She then remembers and Marlin and Nemo are reunited. But soon lots of fish get caught in the net and Nemo tries to help by using a tactic that he learned in the fish tank. What is this tactic?


Answer: Everyone swim down

This gets all the fish out and rescues Dory.
14. After a final scene, we come to the credits. If you watched far enough through the credits you will see another Pixar character swim across the screen. Who is it?

Mike stars in the Pixar movie "Monsters Inc.".
15. Finally we see the fish that were with Nemo in the fish tank. Do they end up escaping from the fish tank?

This is shown as they swim around in the credits.
Source: Author barkera 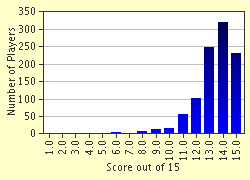 
Other Destinations
Explore Other Quizzes by barkera