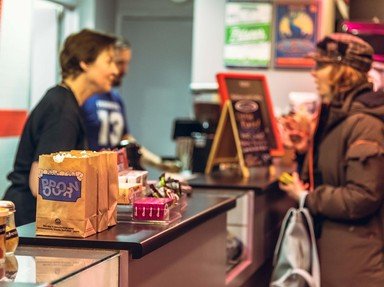 Share on Facebook
Share on Twitter
Share by E-Mail
Author
ubermom
Time
7 mins
Type
Multiple Choice
Quiz #
319,034
Updated
Dec 03 21
# Qns
10
Difficulty
Difficult
Avg Score
5 / 10
Plays
289
This quiz has 2 formats: you can play it as a or as shown below.
Scroll down to the bottom for the answer key.

Quiz Answer Key and Fun Facts
1. Fatty plays a doctor who's a pretty abusive father to Buster Keaton's character, frequently making him cry. But Keaton also does something else -- something he was reputed never to do on screen. He smiles and laughs. What was it in particular that Buster, as Junior, found so funny?


Answer: A horse runs the wrong way on the track.

Junior's amusement infuriates Fatty, since he had bet all his money on that horse and is now broke.

This isn't the only film Buster Keaton laughs in. He chuckles in a few of the Comique films he did with Arbuckle, and openly laughs twice in "Coney Island" (1917).
2. One piece of abuse Fatty inflicts on poor Junior is doubly nasty for the motive behind it. Why does he jab Junior in the leg with a pin?


Answer: So his wife will switch seats with him, getting him closer to another woman.

Fatty flirts outrageously with the woman Al comes to the racetrack with.

Fatty plays adulterous characters in several films, including "Coney Island" (1917) in which he steals a girl from Al, who had stolen her from Buster. His lecherous characters might be part of the reason the public was so ready to condemn him during the Virginia Rappe scandal. What's ironically tragic, considering the damage done, is that Arbuckle was known among his close friends and associates for being remarkably shy with women, "the most chaste man in Hollywood".
3. Fatty overhears a shady character giving Al St. John a tip for the race. Which horse does the man tell Al to bet on?

Fatty follows Al to the bookie and bets all his money on the one horse. Fatty's wife is beside herself. "If we lose, we're ruined!" To add insult to injury, Junior finds the losing horse funny and laughs about how he ran the wrong way. When they get home, Junior yuks it up again about the horse, and Fatty gives him a shove that sends him into a backward roll across a table and into a chair.
4. Home from the racetrack, and quite broke, Fatty opens a letter that clues us in to what a lousy doctor he must be. Who is the letter from?

The letter, addressed to "Doctor Fatty", reads, "Would you please send us a list of your critically ill patients so that we may anticipate their needs?" Clearly if Fatty's patient is on Death's threshold, he can count on Fatty to pull him through.

Later, Al St. John pulls Fatty's business card from his pocket. Fatty's address, 31 Cemetery Way, also doesn't speak well for his medical practice.
5. Meanwhile, Al is also broke from having bet on the same bad horse. But he figures the doctor who was flirting with the vamp must be rich. What plot does he come up with to recoup his racing losses?


Answer: The vamp will lure Fatty away from his house so Al can go there in his absence and pull a robbery.

Al's usually not happy when Fatty horns in on his woman, but in this film he makes an exception.

Al St. John was Roscoe Arbuckle's nephew, and shared equal billing with Buster Keaton in the two-reelers they made at Comique. When Roscoe moved on to doing feature films, Al moved into making westerns and worked steadily playing sidekicks.
6. Fatty wants to slip away to see another woman. What does he tell his wife he's going to do?

The vamp called and said she'd swallowed a bottle of shoe polish. As Junior and the missus walk in, Fatty's telling her to polish her stomach until he gets there. Clearly Junior and Mrs. Holepoke don't believe the story about the impending birth.
7. On his way to his planned adulterous assignation, Fatty encounters a man hawking something he swears will ensure that buyers will never need to see a doctor again. What is it?

The man is selling Hercules Antibacterial Soap. The advertising copy promises, "Prevents all diseases. Just use it every day and you'll live until you die!" But Fatty needs to recoup his gambling losses. He sends his car careening, driver-less, into the crowd, then passes out his business cards to the freshly injured.
8. Fatty arrives at the vamp's apartment and makes a show of taking her pulse and diagnosing a sore throat. He says there's only one cure, and admonishes her to have courage. Then he pulls something out of his little black bag. What is it?

Fatty pulls out not only the cocktail shaker, but the contents of a mini bar including ice. He pours and garnishes two drinks and sits down for a cozy get-together with the vamp.
9. When Fatty's wife comes to the apartment, he hides in the pantry. What does he find there to disguise himself with so he can sneak out?

The maid's boyfriend, a police officer, had come by earlier in the day, and she'd hung his uniform in the pantry while she fed him. Fatty dons it and makes a mustache with brush bristles and a bit of molasses. Al sees Fatty as a cop and flees to the roof, where he shoots off Fatty's fake mustache. Fatty heaves a brick at him and knocks him through the skylight back into the vamp's apartment.
10. What does Fatty end up accidentally doing that not only recoups his gambling losses, but leaves him with a bundle of money?


Answer: He raids the gambling house.

The vamp had given Fatty a tip to bet on Romeo, and the horse won 500 to 1. Fatty, forgetting he was wearing a stolen police uniform, goes to the gambling house to pick up his winnings and scares everybody off. He makes off with all the money.
Source: Author ubermom

This quiz was reviewed by FunTrivia editor jmorrow before going online.
Any errors found in FunTrivia content are routinely corrected through our feedback system.
Most Recent Scores
Oct 28 2022 : Guest 173: 4/10
Oct 14 2022 : kstyle53: 10/10 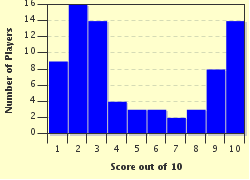