This movie is my stepson's favorite John Wayne Movie. How well do you know it?

Share on Facebook
Share on Twitter
Share by E-Mail
Author
Genoyce
Time
3 mins
Type
Multiple Choice
Quiz #
18,369
Updated
Dec 03 21
# Qns
10
Difficulty
Average
Avg Score
6 / 10
Plays
559
This quiz has 2 formats: you can play it as a or as shown below.
Scroll down to the bottom for the answer key.

Quiz Answer Key and Fun Facts
1. This is the first film Wayne wears a mustache. How many other films does he have one ?

2. Where does the sergeant keep his whiskey hidden ?


Answer: in the water jug

3. How many kids where found at the stagecoach depot after the Indian raid ?

4. What did the sergeant tell the little boy was in the bottle that he keeps drinking from ?

The sergeant would take a drink and then tell the boy it tasted nasty, too.
5. What is Sgt. Tyree's standard answer when Wayne ask him for his opinion ?


Answer: He's mom didn't raise him to give his opinion to no Yankee Officers

The actor who played Tyree's name is Ben Johnson. He was in a few John Wayne movies. He was also a All Around Cowboy in the Pro Rodeo circuit.
6. What breed of dog did the Sergeant call the mutt at the beginning of the movie ?

7. Why was the sergeant thrown in the brig ?


Answer: out of uniform and drinking on duty

8. Why was Wayne escorting the women to the stage ?

9. What does a yellow ribbon stand for ?


Answer: a sweetheart in the cavalry

10. Instead of Goodbye, what does Major Allshard's wife say to Wayne as he's leaving the Post ? 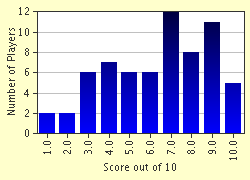 
Other Destinations
Explore Other Quizzes by Genoyce