One of the best modern day westerns of the 1980's, with up and coming stars, directed by Lawrence Kasdan, who had previous success with his super hit of the same era, "The Big Chill".

Quiz Answer Key and Fun Facts
1. Emmett, played by Scott Glenn, has just gotten out of prison, and is sleeping in a shack out in the desert. He hears footprints on the roof, and knows that he is about to be ambushed but he out-shoots his ambushers, escaping death. One of the dead men had a horse that Emmett takes with him. What kind of horse is it?

Scott Glenn's character went to jail because he killed the patriarch of a wealthy ranch owner. The rider of the horse that ambushed Emmett, worked for this family.
2. Emmett comes across a man lying in the desert, only wearing his underwear. What is his name, and who plays him?

Paden was ambushed as well, and everything was stolen from him including his clothes, guns, hat and horse.
3. Emmett and Paden ride into a town for Paden to buy some clothes. He spots his horse, quickly buys a cheap gun, and draws on the man with his horse. A cavalry sergeant comes over, and questions Paden. Paden and the horse are getting re-aquainted. The sergeant wants to know how Paden can prove that this is his horse. What does Paden say?


Answer: "Can't you see this horse loves me?"

When Paden talks about how much the horse loves him, the sergeant replies, "I had a gal that did that to me once. It didn't make her my wife."
4. As Paden is explaining that the horse is his, Cobb, played by Brian Dennehy, verifies Paden's identity, and spells his name. How much money does Cobb lend to Paden to buy clothes?

Cobb reminds him several times that Paden owes him $13.00. Paden says, "13, bad luck." Paden once road with Cobb and his gang but has since tried to become a good man.
5. Emmett is trying to find his brother, Jake, played by Kevin Costner. Emmett and Paden find out that Jake is in jail for killing someone. What does Jake say that he did?

Jake likes to kiss girls in saloons. He kissed a girl, and a jealous man pulled a gun on him. Jake is a fast draw, and killed the man.
6. Mal Johnson, played by Danny Glover, comes into the same town and wants to get a glass of whiskey, and a bed for the night, however, he is discriminated against, which is witnessed by Paden and Emmett. Mal is thrown out of town. Where is Mal travelling to?


Answer: His parent's ranch outside of Silverado.

His dying mother wrote Mal to come home. Mal did not know that she was dying when she wrote the letter. He had to travel from Chicago which took considerable time. By the time Mal got there, his mother had died, and his Dad's ranch had been burned down.
7. Emmett and Jake ride into Silverado to see their sister, Kate and her family. Where are they going after they visit their sister?

Emmett and Jake want to go to California to seek their fortunes, and then return to Silverado at some point in the future. Jake says they will be back at the end of the movie, which eludes to a sequel but a sequel was never made.
8. Cobb is a sheriff and a saloon owner.

Cobb is really a bad guy, but somehow lands the job as sheriff. When he shows Paden his badge, he says, "Welcome to heaven", and laughs. Paden can't believe it because he knows how corrupt Cobb really is.
9. Who plays Stella, and what does she do for a living?

Linda Hunt plays a great role as the bar manager for Cobb's saloon and becomes a fast, best friend to Paden who is hired to manage the gaming.
10. At the end of the movie, Cobb and Paden have a showdown. They both draw, and Paden kills Cobb. As Jake and Emmett get ready to leave for California, they ask if Paden wants to come. What is his reply?

After killing Cobb, Paden becomes sheriff, and presumed to be the owner of the saloon at the end of the movie. As he says these words, he flashes his lapel to show the badge to Emmett and Jake.
Source: Author mariannafunk 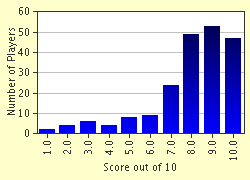 
Other Destinations
Explore Other Quizzes by mariannafunk