The western film 'Shane' is one of Hollywood's all-time classic hero stories. This quiz covers the very basics of this excellent film about heroism and family.

Quiz Answer Key and Fun Facts
1. To begin with, let's identify 'Shane' by time period. In what decade was this great film classic released?

'Shane' is considered one of the all-time classics of the western genre, appearing in the top 50 westerns according to user ratings at the IMDB, and also appearing in the top 50 films of the American Film Institute's top 100 American movies of all time. And for good reason...this film has all the ingredients of cinematic greatness.
2. 'Shane' isn't just a film, he is the title character. Who plays the quiet, stalwart gunfighter Shane, whose last name is never revealed?

One of the great film noir actors of the 1940s and 50s, Alan Ladd began his film career at the tender age of 18 in 1932. Some other Alan Ladd films worth a look include: 'This Gun for Hire', 'The Glass Key' and 'The Great Gatsby'. An interesting tidbit...Ladd was born in Hot Springs, Arkansas and died in Palm Springs, California.
3. What U.S. state featuring majestic mountains is the setting for 'Shane'?

Specifically, Shane is filmed on location at Jackson Hole and Grand Tetons National Park, both in northwestern Wyoming just south of Yellowstone Park. The Grand Tetons are immediately recognizable and make for iconic scenery that is just as memorable as the movie itself.
4. What is the last name of the family that Shane comes to work for as a hired hand, little realizing he will soon be embroiled in a conflict between homesteaders and a powerful cattle baron named Rufus Ryker?

The Starrett family consists of father Joe, his lovely and charming wife Marian and their curious and playful son Joey. They are among several homesteading families who have put up their stakes near Jackson Hole, in territory coveted by the greedy Ryker.
5. What Oscar-winning actor played the part of the simple homesteader Joe, who hires Shane?

One of my favorite supporting actors of classic Hollywood, Van Heflin is typically marvelous in 'Shane'. He won his Best Supporting Actor Oscar for his performance in the 1942 film 'Johnny Eager'.
6. Joe's wife is played by the lovely and vivacious Jean Arthur, a true Hollywood star in every sense of the word. Is it true that this was Jean Arthur's last film appearance?

Unfortunately for us, Jean Arthur decided to call it quits very early in her career. She was only 52 when 'Shane' was made, and in fact she was convinced to come out of retirement to make this last feature film of her career. Some of my favorite films featuring Jean Arthur include: 'Mr. Deeds Goes to Town', 'You Can't Take it with You' and 'Mr. Smith Goes to Washington', all directed by Frank Capra. Also check out 'The Talk of the Town', which features her with Cary Grant and Ronald Colman, it's quite memorable!
7. The young boy Joey, who is absolutely captivated by the seemingly heroic Shane, is played by a young actor named Brandon De Wilde. Despite his precocious acting performance, is it true that he was deemed to young to be nominated for an Oscar?

In fact, Brandon De Wilde was nominated for a Best Supporting Actor Oscar, but did not win. He became the youngest person ever nominated for a Supporting Oscar at the time, at only 11 years of age. He would eventually be surpassed by Mary Badham, who was nominated for 1962's 'To Kill a Mockingbird', and several other youngsters since.
8. What sinister actor played the villainous Jack Wilson, a mercenary hired by Ryker to enforce his ruthless will on the homesteaders?

'Shane' was the second really noticeable role for Jack Palance (after his performance in 'Sudden Fear' the year before), and in fact he garnered his second of three Best Supporting Actor nominations for his performance as the amoral Wilson. Palance would have to wait another 39 years to finally take home an Oscar, however, for his comedic turn in the 1992 film 'City Slickers'.
9. Things really get out of control between Ryker and the homesteaders when one of the latter is killed while trying to confront Ryker's men. What is the name of this unfortunate character, played by Elisha Cook, Jr., whose death sets up a final confrontation between Shane and Wilson?

With Torrey's death and the burning of one homesteader family's abode, Joe Starrett has seen enough. He prepares to confront Ryker face-to-face, but Shane doesn't allow it, knocking Starrett out after a lively brawl. Shane realizes that he is the only one with skills enough to face the deadly Jack Wilson, thus the physical confrontation with his erstwhile boss.
10. Following the final, deadly confrontation of the film, Shane decides his job is done and it's time to leave. As he rides off, what now iconic line does Joey shout?

One of the most famous movie endings of all-time, the final line of the film 'Shane' was placed among the top 100 movie quotes ever by the American Film Institute.

Thanks for playing this quiz, I hope you have enjoyed it.
Source: Author thejazzkickazz 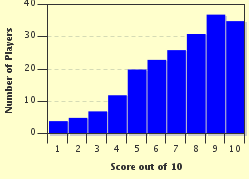