And Justice For All Trivia Quiz

I have the album "...And Justice For All", but I seem to have a few questions about it. Maybe you can help me out here. I gotta know, man!

Quiz Answer Key and Fun Facts
1. I know that Jason Newsted co-wrote just one song on the album, but I can't remember which one it was. Could you help me out, here?

Jason Newsted, James Hetfield, and Lars Ulrich combine their powers to create a classic Metallica song, "Blackened".
2. Cliff Burton wrote the lyrics for a song on this album before his death in a bus crash. Which song was it, though?


Answer: To Live is To Die

The band suffered a terrible loss in 1986 as their bassist, Cliff Burton, dies in a bus crash in Sweden.
3. Isn't there a song on here that all four members of the band wrote? Geez, which one was it?

Ha! And you thought it was "Blackened"!
4. I'm a bit confused here. I know Kirk Hammett wrote a bunch of songs on this album. Which one of these DIDN'T he co-write?

Actually, "Harvester of Sorrow" was only written by Lars and James. It was a single.
5. Over nine minutes long, you say? Tell me, which of these songs is it?


Answer: ...And Justice For All

Nearly ten minutes, actually.
6. "Dear Mother, Dear Father". Hey, sounds like a letter to some parents. What song were those lyrics from again?

Okay, it's not a letter, but a song. It sure sounds like a letter to me.
7. Another nine+ minutes of song? Do tell, which song?


Answer: To Live is To Die

Clocking in at nearly 9:50, "To Live is To Die" is officially the longest song on the "...And Justice For All" album.
8. Hey, I can't quite remember what the first single on the album is. Do you know it?

Hey, I was just kidding. Of course I know that "One" is the first single on the album. I was just checking to see if you knew.
9. I remember watching a Metallica music video. I heard that it was the first music video that the band had made. But I don't seem to remember which song it was of. How about you?

Featuring clips from the movie, "Johnny Got His Gun".
10. I'll end my quiz with this one: Jason Newsted, bassist Cliff Burton's replacement, recorded an EP with Metallica a year before they worked on the "...And Justice For All" album. What was the name of the EP?

Nicknamed "The $5.98 EP", "Garage Days Revisited" is Newsted's first recordings with the band Metallica. Oh, and in case you're wondering where I came up with the other choices, in 1998's "Garage, inc.", there is a section that lists other names that the band was going to call it. Finally, though, they decided upon "Garage, inc.".
And thus ends my quiz. I feel better now.
Source: Author SethMegadefan 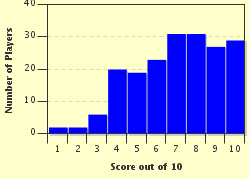 
Other Destinations
Explore Other Quizzes by SethMegadefan