So, You Think You Know Metallica? Quiz

Take this quiz and prove how much you know about Metallica.

Quiz Answer Key and Fun Facts
1. Which of the following metal albums was dedicated to Cliff Burton?

Anthrax dedicated the album "Among the Living" to Cliff. Megadeth dedicated the song "In My Darkest Hour" to Cliff.
2. Metallica allowed its music to be used as the soundtrack to which documentary film released in 1997?

The film tells the story of three teenaged metal-heads who were tried and convicted for the murder of three ten-year-old boys in West Memphis, Arkansas. The songs used in the film are "Welcome Home (Sanitarium)", "The Call of Ktulu" and "Orion".
3. In what year did Metallica first appear on the cover of Rolling Stone magazine?


Answer: Such a Shame

This one is easy because none of the other songs is by Trauma. "It's a Sin" is by Pet Shop Boys; "On the Rocks" is by Savage; and "Slip Away" is by Tygers of Pan Tang.
5. Which of the following Metallica videos was NOT directed by Wayne Isham?

"King Nothing" was directed by Matt Mahurin who also directed the esoteric videos for "The Unforgiven" and "The Unforgiven II".
6. The Ozzy Osbourne home video, "Don't Blame Me", released in 1991, featured interviews with which member/s of Metallica?

Lars tells an amusing story about being in an elevator with Ozzy. The home video features interviews with several other rockers, including Lemmy Kilmister (Motorhead), Joe Elliot (Def Leppard), Nikki Sixx and Mick Mars (Motley Crue), and Jon Bon Jovi.
7. Lars Ulrich was featured as a very special guest musician on the Mercyful Fate album "In the Shadows". On which song did he play drums?


Answer: Return of the Vampire

Lars also co-produced the song. In the album liner notes, there is personal thank you to Lars from King Diamond--in Danish! "In the Shadows" was released in 1993.
8. Which of the following movies does NOT feature the music of Metallica?

"Enter Sandman" "Welcome Home (Sanitarium)" and "Wherever I May Roam" are played in "You Friends and Neighbors". "Motorbreath" is played in "Any Given Sunday". "Master of Puppets" is played in "Old School". "Brother's Keeper" does have an interesting connection to Metallica: it was directed by Joe Berlinger and Bruce Sinosfsky, the pair who directed "Some Kind of Monster".
9. In 1989, Metallica released a special gatefold sleeve collector's edition 12" vinyl of the "One" single. Inside, there was a four-paged insert that provided information about each band member's personal roadie. Who was Kirk's roadie?

This collector's edition of the "One" single includes a live version of "Creeping Death" that is not available on any other Metallica release. It is one of the few officially released Metallica songs available ONLY on vinyl.
10. The Recording Industry Association of America (RIAA) gives platinum records to albums that have sold more than 1,000,000 copies in the USA. Which was the first Metallica album to go platinum?

"Master of Puppets" went platinum on July 27, 1988. Three months later, on October 31, "...And Justice for All" was certified platinum.
11. The song "One" was inspired by a book called "Johnny Got His Gun" by Dalton Trumbo. In what year was the book published?

The book, an anti-war classic, was published in 1939, just before the outbreak of the Second World War. Dalton Trumbo later became one of the famous "Hollywood Ten"--writers and directors who were blacklisted for defying the House on Un-Amercian Activities Commitee (HUAC) in 1947. Coincidentally, the story of the Hollywood Ten was the inspiration for the lyrics to "The Shortest Straw".
12. In 2004, James Hetfield narrated a two-part documentary that covered the season of which NHL hockey team?

The two part documentary aired on ESPN. James has also done a television commercial for the NHL in which he says, "The Stanley Cup: Nothing Else Matters."
13. Before joining Metallica, Robert Trujillo was featured on a Metallica tribute album. What was the name of this album?

The double album was a celebration of the New Wave of British Heavy Metal (NWOBHM) and featured classics by bands such as Iron Maiden, Venom, Diamond Head and Saxon. Coincidentally, Geoff Barton is generally regarded as the person who coined the term NWOBHM.
15. Flemming Rasmussen co-produced the albums "Ride the Lightning", "Master of Puppets" and "...And Justice for All". For what other heavy metal band has he produced albums?

Rasmussen produced Blind Guardian's "Imaginations From the Other Side" and "The Forgotten Tales". He has also produced an album for the band Morbid Angel.
16. The lyric, "When a man lies he murders some part of the world" was taken from which movie?

"Excalibur" (1981) tells the legendary story of King Arthur. The line quoted is spoken by Merlin in the movie.
17. In the summer of 1995, Metallica performed a very special concert at a remote location in Northern Canada. What is the name of the town in which they played?

The concert was performed only for contest winners (who were flown into Tuktoyaktuk) and locals. A custom stage was built for the occasion. Others band on the bill included Hole and Veruca Salt.
18. Metallica fans should recognize the names Jon and Marsha Zazula. The couple formed Megaforce Records, the label responsible for releasing "Kill 'Em All" in 1983. Before starting Megaforce Records, the Zazulas owned, and ran, a record shop. What was it called?

Jon and Marsha Zazula were indispensible to thrash metal. They signed and represented bands such as Anthrax, Testament, Over Kill, Manowar and Raven. Megaforce Records has sold over 30 million records worldwide.
19. The song "Creeping Death" tells part of the story from which book of the Bible?

According to legend, James Hetfield and Cliff Burton came up with the idea for the song while watching the film "The Ten Commandments" on television.
20. James Hetfield sang back-up vocals on a Jim Martin album. What is the name of this album?

James sang back-up vocals for two songs on the album: "Disco Dust" and "Barsoap Hair". The album was released in 1997.
21. In 2001, Lars Ulrich appeared as a contestant on the game show 'Who Wants to Be a Millionaire?'. What charity did he play for?

Lars won $32,000 on the show, which also featured Gene Simmons of Kiss. Haight Ashbury Free Clinics take care of people who have no medical insurance or access to health care.
22. Between 1983 and 1986, several Metallica songs were released on metal compilation albums. Which of the following metal compilation albums did NOT feature a Metallica song?

"Wango Tango Vol. 1" (1984) featured live versions of "Seek and Destroy" and "Phantom Lord" (also available on the "Jump in the Fire" single). "Giants of Steel" (1984) featured "Hit the Lights". "Metal Concussion" (1985) featured "Trapped Under Ice".
23. In 1993, Metallica won the award for 'favorite hard rock/heavy metal artist' at the American Music Awards. What song did the band perform on that program?


Answer: Wherever I May Roam

In 1996, Metallica picked up two more AMAs: one for favourite hard rock/heavy metal song ("Until it Sleeps") and another one for favourite hard rock/heavy metal artist.
24. The album "Master of Puppets" was released on vinyl in South Korea in 1989. Three songs were deleted from the album and replaced with "Breadfan" and "The Prince". What were the three deleted songs?

The record came with an insert that featured a write up of the band (in Korean) on one side and Pushead's "Damaged Justice" art work on the other. Curiously, when "Master of Puppets" was finally released on CD in South Korea, the original track listing was used (no songs were deleted/changed).
25. "Fan Can 1"--a highly coveted boxed set (packaged in a paint can) that was sold only to Metallica fan club members in 1996--included an exclusive t-shirt. What famous hard rock album cover art was spoofed on the front of this t-shirt?

The album cover art used was Thin Lizzy's "Jailbreak". Metallica had it changed to read "Studio Break"--a reference to the concert they performed at Donington in the summer of 1995. The back of the t-shirt reads, "The Boys are Back in DONINGTON" which is a play on the Thin Lizzy song "The Boys are Back in Town".
Source: Author shockomir 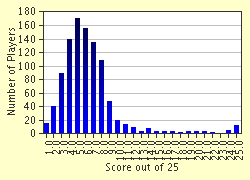 
Other Destinations
Explore Other Quizzes by shockomir