Questions about my favorite metal band.

Quiz Answer Key and Fun Facts
1. Which of these has the correct order of bassists who have appeared in Metallica?

Metallica held auditions for Newsted's permanent replacement in early 2003 after "St Anger" was completed. Bob Rock played bass on this album.
2. What was the name of Metallica's cover album?

The album entered the Billboard 200 at number two.
3. What was the movie called that featured Metallica recording their album "St. Anger"?


Answer: Some Kind of Monster

Over 1000 hours of footage was shot for this two hour movie.
4. In which song from "Death Magnetic" is the album's name mentioned?

"Death Magnetic" stayed at number one on the Billboard 200 album chart for three consecutive weeks.
5. Which is Metallica's best selling album?

"Metallica" sold over 15 million copies in the U.S. and was listed as a diamond seller by the RIAA.
6. "Innocence Torn from me without your shelter Barred reality I'm living blindly" What song are these lyrics from?

"Dyer's Eve" is the shortest song on "...And Justice For All", coming in at 5:13.
7. James Hetfield is one of two remaining original band members. Who is the other?

Metallica was formed when James responded to a newspaper ad listed by Lars.
8. After original guitarist Dave Mustaine was kicked out of Metallica, he went on to form a metal band. What is the band's name?

Dave Mustaine was fired for his drug and alcohol abuse and violent behavior.
9. When was Metallica officially formed?

Their first show had an audience of about 120 people, which for a first show is pretty good.
10. What was Metallica's first single?

"Kill 'Em All" featured other great songs like "Hit the Lights" and "Jump in the Fire".
Source: Author ZepHeadForLife 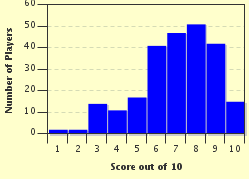 
Other Destinations
Explore Other Quizzes by ZepHeadForLife