Metallica is one of the best groups ever. Good luck with the quiz.

Quiz Answer Key and Fun Facts
1. Which of these was an original guitarist for Metallica?

Dave Mustaine was the original guitarist for the group. He was asked to leave the group shortly before the release of their first CD, "Kill 'Em All", released in 1983.
2. Which CD has these songs: "Battery", "Welcome Home (Sanitarium)" and "Damage Inc."?

"Master Of Puppets" was the group's third CD. It was released in 1986. Sadly, this was the last CD with bassist Cliff Burton before his tragic death in September of that year in a bus crash while touring Sweden. He was succeeded by Jason Newsted.
3. Which song from "And Justice For All" starts with a segment from "The Wizard of Oz"?


Answer: The Frayed Ends of Sanity

"And Justice For All" was the group's fourth CD, released in 1988. "The Frayed Ends Of Sanity" begins with the munchkins chanting before Dorothy killed the evil witch.
4. What movie was the inspiration for Metallica's song "One"?


Answer: Johnny Got His Gun

"One" was the very first video released by Metallica. It was the saga of a crippled war veteran. "One" was on Metallica's fourth CD, "And Justice For All".
5. Which Metallica video won Best Rock Video at the 1992 Video Music Awards?

"Enter Sandman" was the first video from Metallica's 1991 self-titled black CD. It is considered by many fans as their most popular video.
6. Complete this lyric: "What I've felt, what I've known, never shined through in what I've shown, never free, never me, so I dub______...".

This lyric was from "To Live Is To Die". That was from the group's "And Justice For All" CD.
8. What song has these lyrics: "So close, no matter how far, couldn't be much more from the heart, forever trusting who we are"?


Answer: Nothing Else Matters


Answer: Wherever I May Roam

At six minutes, 42 seconds, this was the longest video from Metallica's self-titled CD.
10. When singer James Hetfield was burned onstage while touring with Guns N' Roses, what song was the group performing?

Guns n' Roses and Metallica toured together in the summer of 1992. During a concert in Montreal, Quebec, a stage mishap caused Hetfield to receive third-degree burns and the concert was canceled and later rescheduled.
Source: Author diamondjim68 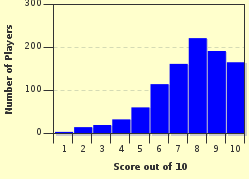