We all know that Anthony Kiedis is the rather sexy frontman from Red Hot Chili Peppers. Here is a quiz on this awesome man!

He was three years old at the time.
3. How old was Anthony when he moved to California?

He lived with his mom in Grand Rapids, Michigan until he was 12 but he was so badly behaved then she couldn't put up with him anymore and let him go live with his dad in LA as she knew he'd wanted to for years.
In California was where he went to Fairfax Senior High School and met his future bandmates: Flea, Hillel Slovak and Jack Irons.
4. What is Anthony's dad's REAL name?

John divorced from Anthony's mother in 1965, when his son was three years old, then moved to Los Angeles and changed his name to Blackie Dammett a few years later. After this, Anthony decided he had to change his name too, as his father's surname was Dammett and his was still Kiedis, so Anthony became Cole Dammett.
Blackie acted in films such as "Nowhere to Hide", "Jokes My Folks Never Told Me", "The Boys Next Door" and "Lethal Weapon".
5. What film did Anthony act in, in 1991?

He played a surfer call Tone.
6. How old was Anthony when he broke his back?

Teenage Anthony and Flea often jumped off buildings into swimming pools, but one day Anthony miscalculated his jump and landed on the concrete a few inches away from the pool.
7. What was Anthony's band originally called?


Answer: Tony Flow And The Miraculously Majestic Masters Of Mayhem

The band consisted of Anthony on vocals, Michael Balzary AKA Flea on bass, Hillel Slovak on guitar and Jack Irons on drums.
Its name was later changed to the Red Hot Chili Peppers.
8. When Anthony was 21, did he have a car accident?

He fractured his eye socket and cracked the side of his head in his mom's Subaru, then played a show with the Red Hot Chili Peppers less than a week later.
In his autobiography, he described himself as "resembling a plate of spaghetti and meatballs". (Lovely.)
9. Who did Anthony dedicate songs such as "Knock Me Down" and "My Lovely Man" to?

Hillel Slovak died of a heroin overdose on the 25th of June, 1988.
10. What is Anthony's autobiography called?

It was first published in 2004.
Source: Author Swiftclaw 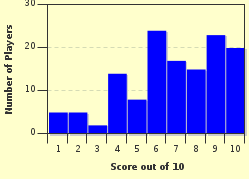 
Other Destinations
Explore Other Quizzes by Swiftclaw