You don't have to be a groupie expert to have fun with my Floyd quiz. Just a little basic knowledge, and love of this most innovative rock band.

Quiz Answer Key and Fun Facts
1. What founding member came up with the name for Pink Floyd?

After starting the band he left a short while later because of personal problems. We all still love him.
2. Who replaced Syd?

David continues to lead the band today.
3. What was their first album?


Answer: 'Piper at the Gates of Dawn'

The title was taken from Syd's favorite children's book: 'Wind in the Willows' by Kenneth Grahame.
4. Which early album has the most interesting song: 'Several Species Of Small Furry Animals Gathered Together In A Cave And Grooving With A Pict'?

'Ummagumma' is British slang for sex.
5. The most impressive song 'One Of These Days' is on which album?

'One of these days! I'm going to cut you into little pieces!' 'The Albatros' appears, ever so gentle, later in the album.
6. Which of their albums stayed on the charts the longest?


Answer: 'Dark Side Of The Moon'

"Dark Side of the Moon" stayed on the charts over 700 weeks.
7. Which album is their tribute to Syd?


Answer: 'Wish You Were Here'

'Shine on You crazy Diamond' -- SYD
8. What album also became a successful movie?

This bizarre film stars Bob Geldolf.
9. Which album is dedicated to the memory of Roger Waters' father?


Answer: 'A Momentary Lapse Of Reason'

Hurrah! The Quiz is done! I hope you liked it! Contact me please so we can chat...
Source: Author bryceh 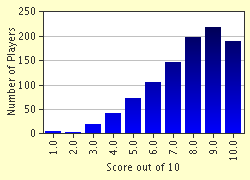 
Other Destinations
Explore Other Quizzes by bryceh