Mainly Syd, but you need to be a Floyd addict, then again maybe not. Have fun, I did creating it.

Syd was born 6 Jan 1946 as Roger Keith Barrett and at the age of 14 was given the nickname Sid Barrett after a local Cambridge jazz musician. Syd changed the spelling in order to differentiate himself from his namesake.
2. What was the bands name before "The Pink Floyd Sound" (Later "Sound & The" were dropped)?

Barrett created it on the spur of the moment from the given names of two blues musicians that he had in his record collection (Pink Anderson and Floyd Council) when he discovered that another band, also named the Tea Set, were to perform at one of their gigs.
3. Shortly before Syd and Pink Floyd parted ways, Syd tried to teach the band a new song titled "Have You Got it Yet". Why was it never recorded?


Answer: Syd changed the composition on each performance

In a demonstration of his frustration at being effectively sidelined, Barrett tried to teach the band a new song, "Have You Got it Yet?", but changed the composition on each performance making it impossible for them to learn.
4. What was Syd's nickname amongs the group?

"Shine On" was a tribute to Barrett, who, in an ironic twist, made an impromptu visit to the studio while it was being recorded. The band failed initially to recognise Barrett, who had gained weight and changed in appearance.
5. What is the Pink Floyd song "You've Got to be Crazy" now known as?

"You've Got to be Crazy" and "Raving and Drooling" where initially written for "Wish You Were Here" but had no place in the new concept and were set aside. Later the titles changed to "Dogs" and "Sheep" and used were used on "Animals".
6. Richard Wright quit Pink Floyd towards the end of recording "The Wall" album due to disagreements with the band. What was his subsequent role in "The Wall" tour?


Answer: He was a paid musician

Beginning 14 November the band supported Jimi Hendrix on a tour of England, but on one occasion, when Barrett failed to turn up, they were forced to replace him with David O'List.
8. Who played lead guitar in the early days when they were known as The Pink Floyd Sound?

Bob Klose left in 1965, at the behest of his father and college tutors, and Barrett took over on lead guitar. This occurred just before the recording of "Arnold Layne".
9. Syd Barrett sadly passed away on 7 July 2006. What was the cause of his death?

The cause of death was pancreatic cancer, but was often reported as "complications from diabetes".
10. Which is the only song by Pink Floyd that features both Syd Barrett and Dave Gilmour?


Answer: Set the Controls for the Heart of the Sun

The song features minor guitar work both from Dave Gilmour and Syd Barrett, making "Set the Controls for the Heart of the Sun" the only Pink Floyd song that features all five band members. Syd and Dave never were actually in the studio together for the recording of this song.
Source: Author ArthurR 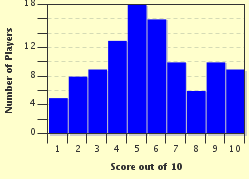 
Other Destinations
Explore Other Quizzes by ArthurR