Some trivia questions for the Pink Floyd fan. (That's everybody, right?)

Quiz Answer Key and Fun Facts
1. David Gilmour joined the band after Syd Barrett went flaky from numerous acid adventures. How old was he and what year did he join?

The rest is history.
2. Who sang guest vocal on the song, "Have a Cigar"?

Neither Dave, Roger or Rick could nail the tune. Roy happened to be recording down the hall. They invited him to try. I guess it was a keeper.
3. The song "Money" is unique in rock music because:


Answer: of the time signature

7/8! The sax solo stays in this time sig. The guitar solo goes to a more conventional 4/4.
4. Which British rock guitar god was a major influence on David Gilmour?

Gilmour cites many rock and blues guitarists as major influences.
5. The album "Piper at the Gates of Dawn" was recorded in this studio.

The Beatles were down the hall recording "Sgt. Pepper."
6. Nick Mason is the only band member to appear on every Pink Floyd release, from "Piper at the Gates of Dawn" through "P.U.L.S.E."

Let's hope he's on the next one, too! For that matter, let's hope there is a next one! ;)
7. Name Rick Wright's first solo release.

8. David Gilmour preferred which amp in the 70s?

I believe now he's using Fenders with a Mesa Boogie 100 watt head as an overdrive unit!
9. Nick Mason provided vocals on which of these songs?


Answer: One of These Days

"One of these days, I'm going to cut you into little pieces!" One of the more chilling of Floyd songs.
10. How many weeks was "Dark Side of the Moon" on the Billboard 200 charts?

11. On which album did David Gilmour and Jeff Beck both appear?

A great album!
12. The song "High Hopes" from the album "The Division Bell", was the first song started but the last song finished.

Dave won Roger a lot of "Best Bass Player" awards from various polls.
14. Gilmour usually writes the music for a song first. The song "Sorrow" is an exception.

15. Who was the band's number-one concert back up guitarist, during the 70s?

16. The song "Wish You Were Here" has slide guitar in it.


Answer: he spat in a fan's face

7/6/77. Montreal, Quebec.
19. During which recording sessions did Rick Wright "leave" the band?

For the "Momentary Lapse of Reason" Tour, Rick was a salaried employee. For "The Wall" tour he held the same status. Because of the expense of "The Wall" concerts, every other band member lost a lot of money. Rick was the only one to make money because he was paid per show.
20. During the "Momentary Lapse of Reason" Tour, Gilmour used this brand of acoustic guitar the most.

His Gibson was used mostly in the studio.
21. Where was the album "Animals" was recorded?

The studio that Floyd built.
22. Pink Floyd has never won a Grammy.

They won Best Rock Instrumental for "Marooned" from "The Division Bell".
23. The beginning of the song "Wish You Were Here" features which sound effect?

24. The talking between songs on "Dark Side of the Moon" were culled from interviews conducted by these two band members.

25. In which year did Pink Floyd release their first top 20 single? 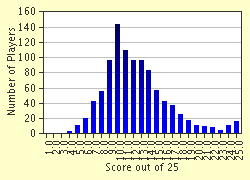 
Other Destinations
Explore Other Quizzes by mikeslapse