Just a little quiz about the best band ever. Good Luck

One of the best bass players ever.
2. Which album contained the song 'Matilda Mother'?


Answer: 'The Piper at the Gates of Dawn'

Released as song three on early Floyd album.
3. On which movie did the Floyd record the song 'Heart Beat, Pig Meat'?

They recorded seven songs for this movie including my favourite, 'Country Song'.
4. Which song appears on the album 'Ummagumma' (live)?


Answer: 'A Saucerful of Secrets'

The best version of the song.
5. In what year was the album 'Meddle' released?

Contains the great song 'Echoes'.
6. What animal is on the cover of 'Atom Heart Mother'?

Just a picture of a cow.
7. Who sang the vocals for the song 'Have a Cigar' from the album 'Wish you were Here'?

The members of the band did not like their sound so they went with Roy.
8. Name the last album that Roger Waters did for the Floyd.

The last good album from Pink Floyd.
9. In what 1972 concert movie does the song "Echoes" appear?

"Live at Pompeii" was filmed during the recording of their classic album "Dark Side of the Moon" in 1972.
10. 'Shine on you Crazy Diamond' is a song about whom?

Barrett left the band in the late '60s because of personal problems.
Source: Author bsmall1978

This quiz was reviewed by FunTrivia editor ralzzz before going online.
Any errors found in FunTrivia content are routinely corrected through our feedback system.
Most Recent Scores
Feb 01 2023 : Guest 193: 8/10
Jan 11 2023 : Guest 98: 10/10 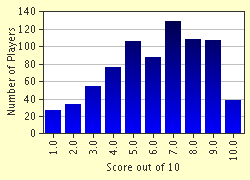 
Other Destinations
Explore Other Quizzes by bsmall1978