This quiz is all about Pink Floyd's early days. It should be easy for Floyd fans. Good Luck!

Quiz Answer Key and Fun Facts
1. Pink Floyd's debut, 'The Piper at the Gates of Dawn' reached what chart position upon its original release in the UK?

'The Piper at the Gates of Dawn' is definitely Pink Floyd at their most psychedelic! When originally released, it reached number six in the UK charts, but got nowhere in the US! I guess they just weren't ready for the Floyd!
2. Pink Floyd's second album, 'A Saucerful of Secrets' is the only Floyd album to feature all five members. Syd Barrett wrote only one song for this album, what was it?

Mystery has always surrounded the sessions for this album. Some believe that the tracks were all originally recorded by Barrett, then re-recorded by Gilmour before release. Others believe that both Gilmour and Barrett can be heard playing together on some tracks, but as their playing is so similar, it is hard to tell them apart! 'A Saucerful of Secrets' reached number nine in the UK charts.
3. 'The Piper at the Gates of Dawn' was re-released as a double album along with 'A Saucerful of Secrets'. What year was this released?

Titled 'A Nice Pair', this double album was released in December of 1973.
4. On the album 'The Piper at the Gates of Dawn', how many tracks were written by Barrett alone?

Barrett contributed to all but one song on this album, which leaves ten, but two were written by all four band members. That means that, by himself, Barrett wrote eight songs on the album. The only song he made no writing contribution to was 'Take up Thy Stethoscope and Walk' which was written by Waters. Waters now describes this song as "the worst song he's ever written!".
5. At the very beginning of 'The Piper at the Gates of Dawn', the first track 'Astronomy Domine', a voice is heard reciting names of astronomical bodies. Who does this voice belong to?

A trickier one that. Peter Jenner was one of the band's managers, and it is his voice that is heard, through a megaphone. Andrew King was another manager of the band, and Norman Smith produced the album.
6. Which song is this lyric from: "There was a king who ruled the land, his majesty was in command"?

Taken from 'The Piper at the Gates of Dawn,' this is one of my favourite songs on the album.
7. What was Pink Floyd's first single?

'Arnold Layne' was Pink Floyd's very first single, and was released in March 1967. It reached number 20 in the UK singles charts.
8. 'Syd' is not actually Syd Barrett's real name, what is his real name?

Syd Barrett was born Roger Keith Barrett on the 6th January 1946. Some people believe that the 'Syd' bit was short for 'Sydney.' But apparently 'Syd' was just a nickname that stuck. We wouldn't have him any other way!
9. What was the B-side to Pink Floyd's second single 'See Emily Play'?

'See Emily Play' was released in June 1967, and reached number six in the UK charts. The B-side to this single was 'Scarecrow' taken from 'The Piper at the Gates of Dawn'.
10. Which unusual instrument has its own solo in 'Corporal Clegg'?

Taken from 'A Saucerful of Secrets', thankfully, the kazoo solo on 'Corporal Clegg' is one of the only ones to exist in popular music!
Source: Author sarah18791

This quiz was reviewed by FunTrivia editor ralzzz before going online.
Any errors found in FunTrivia content are routinely corrected through our feedback system.
Most Recent Scores
Feb 01 2023 : Guest 193: 5/10
Jan 11 2023 : Guest 98: 9/10 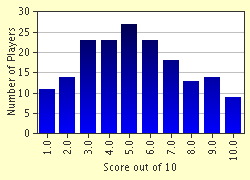 
Other Destinations
Explore Other Quizzes by sarah18791