How well do you know the words to some of the most popular Backstreet Boys songs? Take this quiz and find out.

Quiz Answer Key and Fun Facts
1. Finish the lyric: 'Life goes on...' ("Show Me The Meaning Of Being Lonely")


Answer: As it never ends

This video showed tragedies that some of the band mates went through. Some of tragedies were Brian's risky heart surgery, the death of Howie's sister, and the loss of Kevin's dad.
2. Finish the lyric: 'But we are two worlds apart, can't reach to your...' ("I Want It That Way")

This song was one of the Backstreet Boys' biggest hits. The video took place in an airport and at the end there were a lot of fans around them screaming. This video was showing how huge the Backstreet Boys are.
3. Finish the lyric: 'Voices tell me I should...' ("Incomplete")

"Incomplete" was the first single on the album 'Never Gone'. After a four year hiatus, the Backstreet Boys returned with their single 'Incomplete'. The video was shot in the desert and shows Kevin playing the piano. Brian is in the ocean and AJ is driving in a car.
4. Finish the lyric: 'You gave me a smile that I could never...' ("I Just Want You To Know")

"Hey Mr. DJ (Keep Playing This Song") came off the Backstreet Boys' first album. This is one of my favorite songs. Along with the beat and the words, it is a song that will make me feel happy when I am down. This is definitely one of their best songs.
6. Finish the lyric: 'Everything I do is for...' ("Quit Playing Games With My Heart")

This song starts off with AJ and a girl talking. In this video the Backstreet Boys are running away from all the girls that they cheated on. In one point of the video, Howie is dressed up as one of the girls that is chasing them.
8. Finish the lyric: 'I can see that you've been...' ("More Than That")

This was the Backstreet Boys' last single off the album 'Black and Blue'. Before the Backstreet Boys took a break, they released one more single called "More Than That". This is a very pretty song. The song starts with Brian. then it goes to AJ, and then Nick sings. It is a great ending before they take a braek from the music scene.
9. Finish the lyric: 'People say I'm crazy and that I am...' ("As Long As You Love Me")

If you watch this video closely, you can see Brian's "future" wife, Leighanne. This video is as if the Backstreet Boys are auditioning for either another music video, a television show or a movie. It shows each of the guys' funny side.
10. Finish the lyric: 'Wishing I could...in a different way' ("Larger Than Life")

This video was set in the future. It was really cool. This video has cool dance moves and awesome special affects. My favorite part is at the end when they are dancing . Their moves are so smooth and perfect.
Source: Author ilovequeen 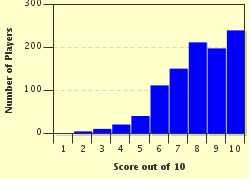 
Other Destinations
Explore Other Quizzes by ilovequeen