Quiz Answer Key and Fun Facts
1. How many albums of The Beach Boys went to #1 on Billboard?

The Beach Boys' first live album, "Beach Boys Concert", spent 4 weeks at #1 in late 1964. Their 2-LP compilation from 1974, "Endless Summer", spent one week at #1 during a 155 week stay (their longest charted album).
2. Which of their albums was the last to be commercially released in mono AND (labeled as) stereo?

"Friends", their follow-up album to "Wild Honey", was the first to be released only in stereo during the phaseout of mono albums in 1968.
3. Who is the off-mike voice that belts out the word "day" near the end of "Graduation Day" from their first concert album?

Naturally, Dennis got a screaming ovation from the girls for that.
4. Of the original three "Best Of Beach Boys" compilation albums on Capitol, which of these hit songs appears on two of the three?

"409" appears on Volumes 2 and 3, the only song to have this distinction. Oddly enough, the other songs listed here, which all have charted much higher, do not appear on any of the three volumes at all.
5. What is the original title of the Charles Manson penned (but Dennis Wilson credited) song "Never Learn Not To Love"?

The song was issued on the 20/20 album and also as the B-side of their rendition of Ersel Hickey's "Bluebirds Over The Mountain". Charles Manson sternly told the Beach Boys not to alter the lyrics to the song. Dennis altered them anyway, infuriating Manson. The rest, you could say, is horrible history.
6. Which song was released by Capitol with a picture sleeve but without a record?

Capitol 5826 was the original pressing for the "Heroes And Villains" single. Its recordless picture sleeve is now valued at $400 near mint. The common single release on the Beach Boys' newly created Brother label (#1001) was released with a different picture sleeve with a near mint value of $100.
7. Which Beach Boy does NOT sing background on Chicago's 1974 hit "Wishing You Were Here?"

#11 hit for the group in October 1974.
8. Which song was originally printed in error on the "All Summer Long" album?


Answer: Don't Back Down

Original pressings of the album show the track as "Don't Break Down".
9. Which song is NOT included in "The Beach Boys Medley" from 1982?

Song medleys were quite popular in the early 80's! After the huge success of the mainly Beatles-based "Stars On 45 Medley" by Stars On 45 in 1980, Capitol labelmates The Beach Boys and The Beatles had their own medleys created. "The Beach Boys Medley" consisted of eight of their 60's hits (starting with their three #1's from that decade), while "The Beatles Movie Medley" was created as a promotional move for their movie song-based compilation "Reel Music". Both medleys reached #12 on Billboard, giving both groups their first Top 15 hits in 5-6 years.
10. What is the original title of the never released "Smile" album?

A few of the songs for "Smile" were used for "Smiley Smile", the first album released on The Beach Boys own Brother label. Although it included the hits "Good Vibrations" and "Heroes And Villains", it was a Top 40 near miss.
Source: Author Drivein101 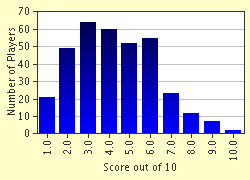 
Other Destinations
Explore Other Quizzes by Drivein101