You will have to be more than the casual Beach Boy fan to get these right. GOOD LUCK!

Of course it's Al Jardine! David Marks replaced Al for a short time in the early 60's while Al attended dental school. Bruce joined the group in in the mid 60's, and Hal Blaine was a studio drummer that they used on some albums.
2. How much money did each member of The Beach Boys make from their first single "Surfin"?

They only made $200.00 a piece for "Surfin'" which prompted Al to quit the group and go to dental school. Al rejoined the band about a year after he left, and said the following: "I'd rather be doing this than be bent over looking at somebody's bridge work."
3. In what year did the group release their mega-hit "Good Vibrations"?

"Good Vibrations" was released as a single in October, 1966. It later appeared on The "Smiley Smile" album in 1967.
4. Brian Wilson is the youngest Wilson brother.

"Little Deuce Coupe" was released on October 7th, 1963.
6. Which member of the band didn't usually play an instrument?

Mike didn't play anything, except for a little bit of "Shut Down". Al played rhythm guitar. Carl played lead guitar, and Dennis was the drummer.
7. In what Southern California town did the Beach Boys grow up?

The Beach Boys grew up in Hawthorne California. They all graduated from Hawthorne High, except for Mike, who didn't graduate at all.
8. What Beach Boy song, written by Brian Wilson, did Paul McCartney refer to as "the most beautiful song ever written"?

The correct answer is "God Only Knows" from the "Pet Sounds" album.
9. Dennis Wilson died in December of 1983. How did Dennis die?

Dennis drowned in December 1983, just days after his 39th birthday.
10. Which one of these huge Beach Boy hits did Brian Wilson have nothing to do with?

Brian had nothing to do with "Kokomo". "Kokomo" was written by Mike Love and John Phillips from "The Mamas and The Papas". Brian wrote or produced, or wrote AND produced the other choices. Kokomo was #1 in the USA in 1988.
11. Carl Wilson was the second member of the band to pass away. What year did Carl die?

Carl lost his battle with cancer on February 6th, 1998.
12. After Carl died, The Beach Boys took a few months off. When they began touring again, who had replaced Carl?

Philip Bardowell replaced Carl. Actually, Philip was already touring with them as a guitar player. After Carl's death, Philip moved to the front line, and took over Carl's vocal parts. Bruce had already been on the front line, Mike Meros was a member of the back-up band as a keyboard player, and Stan Love is Mike's brother, and isn't involved with the group. Philip left the group in 2002 and is currently touring with Dean Torrence from Jan and Dean.
13. In 1981, Carl Wilson left the group to embark on a solo career.

Oddly enough, Carl did leave The Beach Boys for about a year and a half. He recorded an album, and toured. His album flopped, and he was back with The Beach Boys by mid 1982.
14. Where was Al Jardine born?

Al was born in Lima Ohio. The family moved to California a few years later. Lima is a small town near Toledo.
15. What was the title of Brian Wilson's autobiography?


Answer: Wouldn't It Be Nice

Brian's book was titled "Wouldn't It Be Nice". It came out in 1988. Brian claims to have written only pieces of it, and he also claims that he never even saw the finished product before it hit the stores.
Source: Author clownhead427 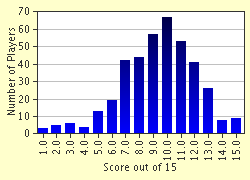 
Other Destinations
Explore Other Quizzes by clownhead427