Rock and Roll Hall of Fame: The Beach Boys Quiz

The Beach Boys created a very unique and pleasing sound that is nearly instantly recognizable. This quiz will feature their legacy as America's band.

Quiz Answer Key and Fun Facts
1. The Beach Boys were largely a family outfit, formed by three brothers, a cousin and a family friend. Two of the brothers were named Brian and Carl. What is the third brother's name?

The Beach Boys were formed in Hawthorne, California (a Los Angeles suburb) in 1961. The three brothers were joined by their older cousin Mike Love and close friend Alan Jardine to start a band which would eventually come to document the Los Angeles scene at the time. Hot rods, surfing, pretty girls and cruising the scene would all become staples of The Beach Boys' sound.
2. The Beach Boys' first hit in the USA was aptly titled "Surfin' USA". Which fellow member of the Rock and Roll Hall of Fame threatened a lawsuit against The Beach Boys for borrowing the hook and melody of one his original songs?

Chuck Berry's "Sweet Little Sixteen" was infringed upon by Brian Wilson with the release of "Surfin' USA". When the song was released, Berry was working his way through a five year prison term. Upon his release from prison, he threatened a lawsuit again The Beach Boys for stealing his creative work.

A settlement was made where Berry would receive credit for writing the lyrics and music to the song, as well as receiving all past, present and future royalties for the hit.
3. The Beach Boys were obviously a group of male musicians. However, there was once a female who was included in the touring band and given the nickname The Beach Girl. Who was this young lady?

Before Toni Tennille found success as part of the duo Captain & Tennille, she was a backing vocalist with The Beach Boys touring band. The other half of that duo, husband Daryl Dragon, was also part of the touring band, supplying his keyboard talents. Toni Tennille has performed on many other artist's albums including Pink Floyd's "The Wall" and on at least three Elton John recordings.
4. The Beach Boys' music was often very technical and complex, recorded in the studio with techniques that were considered very modern for their time. Who was the brain behind much of the genius that was The Beach Boys' sound?

Brian Wilson is one of the true musical geniuses who was literally years ahead of his time. The incredible album "Pet Sounds" is testament to that. Sir Paul McCartney has claimed this to be his favorite album of all time and the apex of any musician's creativity. So many people listen to The Beach Boys' music without realizing the utter brilliance behind the sound.
5. With song titles such as "Surfin' USA", "Surfin' Safari" and "Surfer Girl", one would think that the band were all avid surfers. In fact, it was only Mike Love and which other member who enjoyed the sport?

It's a sad story of Dennis Wilson's passing. While boating with a group of friends, Dennis became enraged and began throwing many of his own personal items overboard. Once his temper had settled, he began making dives from the boat to retrieve his belongings. It was on one of these dives that he was presumably overcome with fatigue and he drowned.
6. Which popular American television actor has a history with The Beach Boys?

John Stamos was an actor on the hit television program "Full House", the story of a single father raising three daughters in suburban San Francisco. John Stamos played the girl's uncle, Jesse Katsopolis. During several episodes, Uncle Jesse made references to his good friends in The Beach Boys.

The band made several guest appearances on the show and even provided their musical talents as backing band for Stamos' song "Forever". In return, John Stamos has played the drums live with The Beach Boys for several of their concert appearances.
7. The Beach Boys released the album "Pet Sounds" in 1966 and the album quickly surpassed The Beatles to take the number one spot on the US Pop Albums chart.

Ask many music critics to name the best album released and you will probably hear "Pet Sounds" and "Sgt. Pepper's Lonely Hearts Club Band" time and time again. "Pet Sounds" was one of the most innovative musical offerings of all times. This album was primarily recorded by Brian Wilson and a group of session musicians while the remainder of The Beach Boys were touring Japan.

The group returned home and lent their vocals to the recordings that Brian had made. It was no secret that the band was not keen on the new direction that Brian's music had taken, and they only hesitantly took part in the album.

The album never reached the top of the US Pop Charts, only managing to reach the number ten position.
8. For such an amazingly gifted group of musicians, The Beach Boys were mired in turmoil and controversy of epic proportions. Which of these incidents did not actually happen?


Answer: Brian Wilson once stabbed his brother Carl in the neck with a kitchen knife after an argument about the music on "Pet Sounds".

Yes, all of these are true accounts of stories that surrounded The Beach Boys, with the exception of the stabbing.
Brian Wilson had a very brilliant mind, and like so many people plagued with great creativity, he suffered anxiety and panic attacks that caused him to indulge in drugs and alcohol to curb those sensations. At one point, his dependence was so great that the band hired Eugene Landy, a psychologist, to intervene in Wilson's situation. Of course, this led to further problems when it was discovered that Mr. Landy was manipulating Wilson for his own financial gain. The band eventually had to seek court orders to prevent Landy from further interaction with Wilson.
The law suit between the cousins was probably not as damaging as it may sound. Brian Wilson freely admitted that Mike Love was owed royalties, but an exact amount could not be agreed upon. They sought help from the courts to establish the amount that would be paid to Love. The amount was a hefty 13 million dollars to be paid to Mike Love for lost royalties.
The entire band were no strangers to the decadent lifestyle afforded to them. Many concerts were of terrible quality due to the musician's lack of sobriety. In one famous incident, the band issued formal public apologies after a miserable performance in Melbourne, Australia in 1978.
9. The band's last number one single on the U.S. Billboard Hot 100 was recorded for a movie soundtrack. Can you name which movie that provided this surprising number one hit?

The band had their first number one hit in over 22 years with the release of the single "Kokomo" which appeared on the soundtrack to the movie "Cocktails". This became their biggest selling single and literally exposed the band to millions of younger listeners. "Cocktails", released in 1988, featured an impressive cast including Tom Cruise, Elisabeth Shue, Bryan Brown and Gina Gershon.
10. Which rap act teamed up with The Beach Boys to release a rendition of the classic tune "Wipe Out"?

1987 saw the unlikely pairing of The Beach Boys with The Fat Boys on the cover version of The Surfari's "Wipe Out". There was even a video made of the collaboration. The Fat Boys also collaborated with another legendary rock icon, Chubby Checker, on the song "The Twist".
Source: Author ralzzz 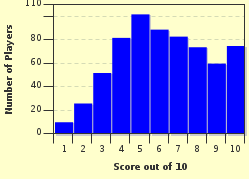