This quiz will cover interesting facts about the song "Barbara-Ann".

Originally called the Monterays, the Regents formed in the Bronx in 1958. They recorded for the Seville label and when their recordings failed to chart they disbanded. A group called The Consorts needed material and recorded a version of "Barbara Ann". When the owner of The Consorts' record label released the version by The Regents it became a smash hit in New York.
The Regents reformed and the Roulette/Gee label was granted distribution for the renamed "Barbara Ann", eventually becoming a Number 13 hit in the US.
The Marcels hit the top slot in 1961 with "Blue Moon". The Dovells peaked at Number Two with "Bristol Stomp" in 1961 and The Cleftones made it into the Top Twenty with "Heart and Soul" the same year.
2. Fred Fassert was the brother of Regents member Chuck Fassert. Fred wrote "Barbara Ann" about which relative?

Fred Fassert was originally inspired to compose "Barbara Anne" by his younger sister. He gave the song to his bother's group to record. "Barbara Anne" was recorded in three takes during the same session as "A Teenager's Love". When the record was released the title was changed to "Barbara Ann". Guy Villari sang the lead falsetto part.
The regents also had a US Number 28 follow-up single titled "Runaround".
3. In 1965 the Beach Boys released a version of "Barbara Ann". Which studio album contained the hit single?

"Beach Boys Party" was a 1965 album consisting of mainly cover tunes done by the group, primarily with acoustic instruments. Among the cover tunes were Beatles tunes "I Should Have Known Better" and "You've Got to Hide Your Love Away". The only Beach Boys songs recorded for the album were in a medley with "I Get Around and Little Deuce Coupe". "Barbara Ann" was later included on the band's 1970 "Live in London" LP. "Summer Days (And Summer Nights!)" was released the same year and listed "Help Me Rhonda" and "California Girls" among the tracks. "Dance, Dance, Dance" was a hit from the 1965 "Today" album and "I Get Around" was a single from the 1964 "All Summer Long" LP.
4. The Beach Boys' version of "Barbara Ann" topped the US Billboard charts.

A "Barbara Ann" session excerpt and a "Barbara Ann" master take without overdubs were included on the "Hawthorne, CA (Birthplace of a Musical Legacy)" double CD release.
The success of the 1998 "Endless Harmony Soundtrack" prompted Capitol Records to release a second anthology album.
"Still Cruisin'" was released in 1989 and "Keepin' the Summer Alive" was a 1980 release.
6. On which nineties television series did the Beach Boys perform "Barbara Ann" live in Wilson's back yard?

In season six of "Home Improvement" the Beach Boys paid a visit to their cousin, Wilson, and sang "Barbara Ann". The episode was titled "The Karate Kid Returns". The late Earl Hindman played the Taylors' neighbor Wilson in the series that ran from 1991 to 1999. His actual name in the series was Wilson Wilson Jr.
"The Wonder Years" ran from 1988 through 1993 and was set twenty years earlier. The Village People made a guest appearance on "Married With Children" (1987) in an episode titled "Take my Wife, Please". "Picket Fences" first aired in 1992 and was based in the fictional town of Rome, Wisconsin.
7. Which British group released a recording of "Barbara Ann" sung by their flamboyant drummer in 1966?

In 1966 The Who recorded a version of "Barbara Ann" featuring Keith Moon on vocals. The song was included with other tunes on a seven inch extended play recording titled "Ready Steady Who". The title was in reference to a British music program.
Also included on the EP recording were covers of the "Batman" theme and "Bucket T". "Disguises" and "Circles" were two tunes on the release penned by Who guitarist Pete Townsend.
Led Zeppelin did not form until two years later. Known for writing their own material, The Kinks recorded a Bo Diddley song and two Chuck Berry songs on their 1964 self-titled debut album. The Honeycombs featured a female drummer named Honey Lantree.
8. Which singer sang lead with Brian Wilson on the Beach Boys' 1965 version of "Barbara Ann"?

Dean Torrence of Jan and Dean shared lead vocals with Beach Boy Brian Wilson on "Barbara Ann".
The flip-side of the single was "Girl Don't Tell Me". Dean was not given credit on the album cover, however, Carl Wilson is heard saying "Thanks Dean" at the end of the track. All the other Beach Boys were on the recording singing harmony and drummer Hal Blaine played ashtrays.
Terry Melcher and Beach Boy Mike Johnston were members of The Rip Chords. Paul Jensen was the lead vocalist for Ronnie and the Daytonas and Howard Kaylan was a lead vocalist with The Turtles.
9. Which seventies television series featured a version of "Barbara Ann" with the lyrics changed to "Baa-baa-baa Baa-Barbarino"?

John Travolta's character, Vinnie Barbarino, would occasionally sing "Baa-baa-baa Baa-Barbarino" on "Welcome Back Kotter". Barbarino was the unofficial leader of the classmates known as The Sweathogs on the series that ran from 1975 to 1979.
"Different Strokes" (1978) featured a young Gary Coleman often using the catchphrase "What you talking 'bout Willis?". "Good Times" ran from 1974 to 1979 and featured Jimmie Walker as James "J.J." Evans, Jr.
Room 222 was a school-based sitcom that ran from 1969 to 1974.
10. Which nineties television series featured characters Zach, Slater and Screech lip synching "Barbara Ann" in an episode titled "House Party"?


Answer: Saved by the Bell

The original name of the sitcom "Saved by the Bell" was "When the Bell Rings" until NBC changed the name after acquiring the rights to the show. During the second season the "House Party" show featured the cast singing "Barbara Ann" during a party they threw when Screech's mother went to Graceland.
The series focused on the exploits of the teenaged characters with various teachers also featured. The original show ran from 1989 to 1993, when it was aired as "Saved by the Bell: The College Years" for one season. It was changed to "Saved by the Bell: The New Class" until 2000.
"My So-Called Life" took on controversial topics beginning in 1994. "Boy Meets World" followed the development of the main character for seven years beginning in 1993 and "That '70s Show" was about the lives of teenage buddies living in fictional Point Place, Wisconsin from 1976 to 1979.
Source: Author shanteyman 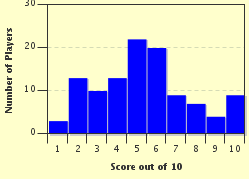