Quiz Answer Key and Fun Facts
1. Which song goes: "Well I'm not braggin' babe so don't put me down, but I've got the fastest set of wheels in town"?

"Little Deuce Coupe" was written by Brian Wilson and Roger Christian, a Los Angeles disc jockey. The album "Little Deuce Coupe" reached number 4 on US charts and eventually went platinum.
2. "This is the way I always dreamed it would be. The way that it is, oh oh, when you are holding me." Which Beach Boys song contains these lyrics?

"I Can Hear Music" was a Phil Spector cover and was released on the album "20/20". The album was released in 1969.
3. Which song, debuting in 1964, was the first number one hit for the Beach Boys, and goes "My buddies and me are getting real well known. Yeah, the bad guys know us and they leave us alone"?


Answer: I Get Around

"I Get Around" is the first track off the album "All Summer Long", released in 1964 by Capitol Records. "I Get Around" has also appeared on a few live albums and greatest hits compilations. Many feel "Surfin' USA" was the first number one hit for the band, but it actually only reached number three in the US.
4. Which song contains these lyrics: "Well since she put me down I've been out doin' in my head. Come in late at night and in the morning I just lay in bed."?

In 1965, "Help Me Rhonda" became the second number one hit for the Beach Boys. The song appeared on both "Today!" and "Summer Days (and Summer Nights!)", each album being released in 1965. Al Jardine is credited as singing lead on this song.
5. Which song, released in 1988, was their first hit in a long time and had these lyrics: "We'll get there fast and then we'll take it slow. That's where we wanna go, way down to _____"?

"Kokomo" was released in 1988 and was the band's first number one hit in more than 20 years. It was the Beach Boys' biggest selling hit.
6. According to the song, which US state has the best girls, expressed by the lyrics "I wish they all could be _________ girls"?

"California Girls" was released on the album "Summer Days (and Summer Nights!)" in 1965. It reached number three in the US charts and 26 in the UK. Brian Wilson wrote the song and it featured Mike Love as lead vocals.
7. "Went to a dance, lookin' for romance. Saw ________ so I thought I'd take a chance." Which name belongs in the blank?

"Barbara Ann" was a cover of a Regents song, with Jan and Dean featured as singing lead on the recording. It reached number two in the US, appearing on the album "Beach Boys' Party!".
8. Which song has opening lyrics that go "After six hours of school I've had enough for the day. I hit the radio dial and turn it up all the way."?

"Dance, Dance, Dance" appeared on the album "The Beach Boys-Today!" in 1965, along with such songs as "Help Me, Rhonda" and "Do You Wanna Dance". The song peaked at #8 on US charts.
9. This song, debuting in 1966 and reaching number one in both the US and the UK, opens up with the lyrics "I, I love the colorful clothes she wears. And the way the sunlight plays upon her hair".

"Good Vibrations" did in fact reach number one in both the US and the UK. It was released on the album "Smiley Smile" in 1966, and was one of the most expensive songs to make at that time (costing close to $40,000 to make, according to songfacts.com). The song is also supposedly about an experience with acid that Brian had once.
10. This Beach Boys song is probably the band's trademark, although it did not reach as high on the charts as some of their other songs. Which song goes "You'd see 'em wearing their baggies, Huarachi sandals too. A bushy bushy blond hairdo...."?

The song did reach number three in the US but only reached 34 in the UK, not nearly as high as songs like "I Get Around", "Kokomo", and "Good Vibrations". It was released on an album of the same name in 1963. Ironically, Dennis Wilson was the only Beach Boy who actually surfed.
11. True or False: The Wilson brothers, and the band as a whole, generally got along well with their father (who was also their manager).

Murry Wilson, the father of Carl, Brian, and Dennis, was the band's manager until the late 60s, when he was fired after one too many arguments with Brian and the rest of the band. He was reportedly abusive to his sons and wanted things his way, much to the band's annoyance. Still, Brian Wilson later gave him credit for giving the band the ambition to get started.
12. Which band member from the original lineup had no relation to the other members?

Brian Wilson, Carl Wilson, and Dennis Wilson were all brothers and Mike Love was their cousin. Al Jardine was a school friend that Brian played football with. Al quit the band for about a year early on to try a career at dentistry, but later rejoined. He is often called "the lost Beach Boy" because he is so rarely the focus of the band.
13. Which band member had a nervous breakdown and had to stop touring, eventually being replaced on the tour by Glenn Campbell, and later Bruce Johnston?

Brian had been overwhelmed with songwriting, touring, drug use, and producing. At the end of December in 1964, Brian had a nervous breakdown and was replaced on the tour by Glenn Campbell. Shortly after, Bruce Johnston took Campbell's spot. Brian continued to write and record with the band afterwards.
14. Where were the Beach Boys originally from?

The Beach Boys were formed in Hawthorne, California in 1961. Al Jardine was actually born in Ohio, but he moved to California when he was very young. The band originally went by The Pendletones, but they changed it to the Beach Boys shortly before being signed to Capitol Records.
15. True or False: As of 2006, out of the surviving original members (Mike, Al, and Brian), only Brian still tours. 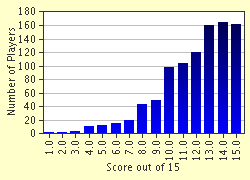 
Other Destinations
Explore Other Quizzes by teej417