Can you name these great songs by The Beach Boys from the lyrics provided? Just so it's not too easy, all the lyrics are from the second verses of the songs.

Share on Facebook
Share on Twitter
Share by E-Mail
Author
shuttlemania
Time
4 mins
Type
Multiple Choice
Quiz #
371,335
Updated
Dec 03 21
# Qns
10
Difficulty
Average
Avg Score
7 / 10
Plays
302
Awards
Top 35% Quiz
This quiz has 2 formats: you can play it as a or as shown below.
Scroll down to the bottom for the answer key.

Quiz Answer Key and Fun Facts
1. The Beach Boys' first number one hit in the USA started the second verse with this line, "We always take my car 'cause it's never been beat". What was the title of the song?


Answer: I Get Around

"I Get Around" was written by Brian Wilson and Mike Love and the single was released in 1964, topping the charts in the USA and reaching number seven in the UK. It was The Beach Boys' first US number one and first UK top ten hit.
2. "Lovin' you, it keeps me satisfied" is the first line of the second verse in which Beach Boys hit single from 1969?

A minor hit in the USA, "I Can Hear Music" reached the top ten in the UK in 1969. It was originally recorded by The Ronettes in 1966 and The Beach Boys' version had Carl Wilson on lead vocals.
3. The Beach Boys had another number one hit in the USA in 1988 with a catchy melody and a second verse that started with the lyric, "We'll put out to sea and we'll perfect our chemistry". What was the song's title?

The single was released to coincide with the film, "Cocktail", starring Tom Cruise and Bryan Brown, in which it featured. "Kokomo" was nominated for a Grammy Award for Best Song Written Specifically for a Motion Picture, but lost out to Phil Collins' "Two Hearts" from the film, "Buster".
4. Going back to 1964, which Beach Boys song, with the same word repeated three times in the title, started the second verse, "When I get put down I try to shake it off quick"?

Written by Brian Wilson, Carl Wilson and Mike Love, the single reached the top ten in the USA and number 24 in the UK. With a simple melody and vocal harmonies, it was a typical early 1960s song.
5. The next Beach Boys song was based on a traditional folk song. They added their famous harmonies and turned it into a 1966 hit. The second verse begins, "The first mate he got drunk and broke in the Captain's trunk". What was the title?

At the suggestion of Al Jardine, Brian Wilson reworked the basic three chord traditional version of the song into a more intricate chord progression. He also changed some of the words, including changing, "Broke into the people's trunk" to "Broke in the Captain's trunk".
6. "Well I've been thinking 'bout all the places we've surfed and danced and all the faces" is the opening line of the second verse of a 1969 Beach Boys song. What is the title of the song that was a much bigger hit in the UK than in the USA?


Answer: Do It Again

Mike Love wrote the lyrics after surfing with an old friend. Brian Wilson added the music, going back to the style of some of their early songs. Whilst the single peaked at number 20 in the USA, it was the band's second number one in the UK.
7. In 1976, The Beach Boys had their first US top twenty hit in eight years with a cover of a Chuck Berry song. The song's second verse began with these lyrics, "I took my love on over 'cross the tracks so she could hear my man a-wailin' sax". Can you name the song?

Chuck Berry wrote and recorded "Rock And Roll Music" in 1957, reaching number eight on the US Hot 100 chart. The song has been covered by numerous artists including The Beatles, REO Speedwagon, Manic Street Preachers and The Beach Boys. The Beach Boys version reached number five in the US charts. The other options were all Chuck Berry songs, but not covered by The Beach Boys.
8. The Beach Boys' biggest hit single was issued in 1966 and opened the second verse with, "Close my eyes, she's somehow closer now. Softly smile, I know she must be kind." Can you name this "Good" record?

"Good Vibrations" topped the US Billboard Hot 100 chart and also topped the UK charts, staying in the top 50 for 13 weeks. In 1997, it was voted number one in the MOJO Top 100 Records Of All Time. It has been credited as changing the face of music at that time.
9. "Let me tell you now, well I got me in a fix, I caught a nail in my tire doin' lickety split" is the first line of the second verse of another Beach Boys hit based on a "Lead Belly" folk song. What is the title of this 1970 hit?

"Lead Belly", born Huddie Ledbetter, wrote "Cottonfields" and first recorded it in 1940. The Beach Boys' version, featuring pedal-steel guitar, incorporated their harmonies and was an international hit, but failed to reach the Billboard Hot 100 in the USA. It was the last Beach Boys single released on Capitol Records.
10. Can you name the song, one of five US hits for The Beach Boys in 1965, that starts the second verse with these lyrics, "The West coast has the sunshine and the girls all get so tanned."?

Reaching number three in the USA and number 2 in Canada, "California Girls" was a minor hit outside North America. It was one of the many songs co-written by Brian Wilson and Mike Love and began with an orchestral prelude before moving into the main song. In 2004, "Rolling Stone" magazine ranked it number 71 on its list of "500 Greatest Songs Of All Time".
Source: Author shuttlemania

This quiz was reviewed by FunTrivia editor agony before going online.
Any errors found in FunTrivia content are routinely corrected through our feedback system.
Most Recent Scores
Jan 16 2023 : Elenafenner: 10/10
Jan 04 2023 : Guest 172: 8/10 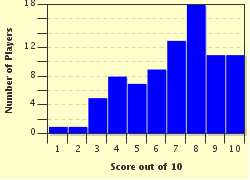 
Other Destinations
Explore Other Quizzes by shuttlemania