This will focus mainly on Brian Wilson songs and publishing outside of the Beach Boys. This will deal with publishing companies in the USA only. This will be extremely tough, so if you're a casual fan beware.

Quiz Answer Key and Fun Facts
1. Which publishing company did Brian Wilson originally use when he wrote and released his first song "Surfin" on a 45? Please read this carefully or you'll cry foul that I tried to deceive you, which may be true.

On Candix 331 and X 301 it was published first under Drink-Guild Music, then Drink went down the drain so to speak and Guild Music was the sole publishing company on Candix 301 and on all Beach Boys albums in the 60s and 70s in the United States.
2. Which one of these Brian Wilson productions was shortest in actual time, not necessarily what was indicated on the record label?

The Castells' lead singer Chuck Girard sang "I Do" which clocks in at approximately 1:47 as the label states. The Hondells' "My Buddy Seat" 45 clocks in at 1:33 on my turntable which has a strobe light to indicate the exact speed of a 45. The label on Mercury states 1:35.
Sharon Marie's "Summertime" clocks in at 1:32 on my turntable although the Capitol label claims 1:30.
Bob & Sheri's "Humpty Dumpty" is the shortest in length clocking in at 1:29.
3. Which song repeats the title more often in the lyrics than the others? Try not to Google the lyrics please.

Depending on the source - vinyl or CD - "409" was repeated at least 44 times and as much as 46 times, whereas "You're Welcome" is only repeated 17 times. It seems like more when you hear "well you're well, you're welcome" over and over again. But it's the title "You're Welcome" that gets repeated only 17 times.
"Round round get around I get around" repeats 25 times though it seems like more. But the "I Get Around" part repeats only 25 times.
"Cool, Cool, Water" gets even trickier with all the "water water water" and "cool coo"l lyrics but the actual words of "Cool Cool Water" sung together, depending on the source, is approximately 23-25 times, which makes "409" the one that crossed the finish line as the clear winner.
4. Which was the first Sea of Tunes song Brian used outside of the Beach Boys?

Both "Barbie" and "What is a Young Girl Made of" are Guild Music written by Bruce Morgan and sung by Kenny and the Cadets with Brian Wilson singing lead.
"Humpty Dumpty" was written by Bob & Sheri and published by Algrace Music with Brian producing it. However it was the A side "The Surfer Moon" that Brian wrote for Sea of Tunes publishing.
5. Which Beach Boys song on a Capitol 45 in the USA is the shortest in time as indicated on the label?

"Ten Little Indians" and "Man with All the Toys" clock in at 1:30 while "You're Welcome" clocks in at 1:17 - but it's on Brother Records in the USA not Capitol. "Wake the World", the B side of "Do it Again" in the States, clocks in at 1:29 making it the shortest.
6. In which gear did the Beach Boys mention "Little Honda"? If you think they did not choose "none of these".

It's not easy to hear "Little Honda" mentioned, but it's in second gear. If you said third gear you may have got it wrong, but at least you were going faster.
7. Brian Wilson and Phil Spector joined forces and completed "Things Are Changing" sung by several different groups. Choose which one of these groups did not perform this song.

Even though Phil Spector was associated with the Ronettes, he did not record them for this project. It was a campaign ad song to promote Equal Opportunity for minority races given to the radio stations.
"Things are Changing" is the same melody as the Beach Boys "Don't Hurt My Little Sister". The Blossoms with Darlene Love gave by far the best version; her vocals blow away the rest of the other versions.
8. Brian used several publishing companies besides Sea of Tunes outside of the Beach Boys. Choose which company published "The One You Can't Have".

Brian also used Sea of Tunes, the Beach Boys' publishing company, during the 60s. It was recorded by Sharon Marie. Annabelle Music was used by Saundra Glantz (aka Ginger Blake) and Diane Rovell of the Honeys.
10. And the last one about Brian's publishing companies. Which one did Brian use for "After the Game"?

It's Ocean again. I threw that in there to see if you really knew your stuff. "After the Game" is an instrumental, the B side of "Pamela Jean", done by The Survivors, a group Brian Wilson formed with Dave Nowlen in '63.
Source: Author TOKENHIPPIE 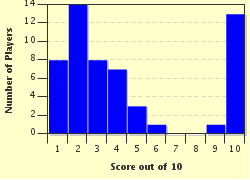