Their first major release, "Fallen," has been certified 6x Platinum and has sold over 14 million copies. But, what do you know about them before they hit it big?

Share on Facebook
Share on Twitter
Share by E-Mail
Author
erin76
Time
5 mins
Type
Multiple Choice
Quiz #
233,062
Updated
Dec 03 21
# Qns
10
Difficulty
Difficult
Avg Score
4 / 10
Plays
875
This quiz has 2 formats: you can play it as a or as shown below.
Scroll down to the bottom for the answer key.

Quiz Answer Key and Fun Facts
1. In 1998, Evanescence consisted of Amy Lee, Ben Moody, and what other band member?

David Hodges left the band in 2002 amid rumours that Evanescence was a Christian rock band. He started his own band called Trading Yesterday.
2. What song of theirs first appeared on local Arkansas radio stations?

"Understanding" was written by Ben Moody and is featured on "Evanescence" EP and "Sound Asleep" EP. After this song aired on local radio, fans demanded they put on a live show.
3. The Claire Danes/Leonardo DiCaprio movie version of "Romeo and Juliet" was the inspiration for what song?

Writer Ben Moody said in an interview that this was one of his least favorite songs.
4. Evanescence has also recorded instrumentals. Which was the first?


Answer: Ascension of the Spirit

"Ascension of the Spirit" is extremely relaxing and beautiful. It is the most 'classical' sounding of all their instrumentals
5. Will Boyd played bass on two songs before actually becoming a full time member. The first was "Solitude." What was the second?


Answer: Away From Me

David Hodges plays piano and sings back up on this song.
6. What pre-"Fallen" song was ever performed live on the radio?


Answer: Even In Death

The band still performed "Even In Death" live in 2003. The song is about loving someone so much you bring them back from the dead.
7. What early Evanescence song features a Latin hymn?

The Latin chanting in "Field of Innocence" is translated as:
"Oh Jesus, King Most wonderful!
Thou conqueror renowned!
Thou sweetness most ineffable!
In whom all joys are found!"
8. The third song ever written by Evanescence, Amy Lee wrote this song and plays the piano.


Answer: Give Unto Me

Originally an intrumental, it was supposed to be released on the "Sound Asleep" EP.
9. This rare and unreleased track was written for a local charity.

Goodnight is not featured on any album and it has never been played live in concert. Unfortunately, I do not know the name of the specific charity.
10. This song, one of Evanescence's trademarks, features Bruce Fitzhugh of Living Sacrifice as male vocals on the "Origin" version.

"Lies" is the name of the consumer products (pizza, soda, doll and perfume) in the "Everybody's Fool" video.
Source: Author erin76

This quiz was reviewed by FunTrivia editor agony before going online.
Any errors found in FunTrivia content are routinely corrected through our feedback system.
Most Recent Scores
Dec 12 2022 : Guest 98: 10/10
Dec 09 2022 : Guest 94: 4/10 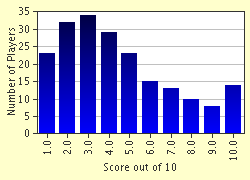 
Other Destinations
Explore Other Quizzes by erin76