Have you "Fallen" for Evanescence yet? Quiz

Well, I was tired of having done all the Evanescence quizzes, and I figured you would be too! Lyrics and other questions from the album "Fallen" as a warm up.

Quiz Answer Key and Fun Facts
1. Okay, let's start easy, how many songs are listed on the album "Fallen", (the US release)?

Numerologically speaking, 11 is a power number. But there are eleven songs on the album, including "Hello", "My Immortal" and number one hit, "Bring Me To Life". Apparently there is a bonus track - an instrumental of "My Immortal" that is not listed on the covers!
2. "All of this time I can't believe I couldn't see, kept in the dark, but you were there in front of me" Who sings these lines?

Paul guest starred for this song, "Bring Me To Life" which like "My Immortal" appeared on the "Daredevil" soundtrack. Ben, Amy and John are all full-time members of the band along with Rocky Gray.
3. "I'm your mind giving you someone to talk to..." in which song does Amy sing these beautiful, haunting lyrics?

The full lines are: "Has no one told you, she's not breathing, hello, I'm your mind giving you someone to talk to...."
4. In which song does the Amy sing the opening lines, "long lost words..."?

Ben Moody said of this song "It's the song that is the most 'us'. That best sums up what we strive to sound like." On their Australian Tour in January 04, they opened with this song.
5. Which record label was "Fallen" released under?

To my knowledge, Tourniquet Records and Immortal Records are names I made up for this question.
6. Which of the following songs does not have its title in its lyrics?

"My Immortal" like "Haunted" and "Whisper" does not actually have its title in the lyrics.
7. The actual words "Everybody's Fool" only appear once in this song.

It's usually sung "everybody fooled" at the end of most of the choruses. For example: "never was and never will be / have you no shame don't you see me / you know you've got everybody fooled".
8. Which of the following songs contains its title within the lyrics?

"My Last Breath" is the only song out of those four to contain its title within the lyrics. "holding my last breath / safe inside myself
are all my thoughts of you / sweet raptured light it ends here tonight". Whisper, does contain the word 'whispered', but not 'whisper' by itself.
9. "My Immortal" what is the correct line?


Answer: But now I'm bound by the life you left behind

This is the most beautiful song on the album if you ask me. I'm referring to verse two, "You used to captivate me/ by your resonating light/ but now I'm bound by the life you left behind/ your face it haunts my once pleasant dreams/ your voice it chased away all the sanity in me" Although whoever Amy sings so beautifully about has gone, they never left.
10. Which song contains these two words, "paper flowers"?

From the chorus: "in my field of paper flowers/ and candy clouds of lullaby/ I lie inside myself for hours/ and watch my purple sky fly over me" I used to think that Track 6 and 7 were one song! It does sound like they play through continually though, listen to it agan, see if you can see what I mean, and PM me too, I'd like to hear if anyone else hears it the way I do.
11. "Whisper" contains a very cool, if not slightly creepy chant. What language is it in?

The choir, as arranged by Amy sings a Latin phrase, "Seravatis a periculum, seravtis a maleficum." Which, as translated by Amy means "Save us from danger, save us from evil".
12. Which of the following lines is not from the first verse of "Taking Over Me"?


Answer: I'll give up everything just to find you.

The odd one out was from the chorus, the first verse and chorus is as follows "you don't remember me but I remember you/ I lie awake and try so hard not to think of you/ but who can decide what they dream?/ and dream I do.../ I believe in you/ I'll give up everything just to find you/I have to be with you to live to breathe/ you're taking over me."
13. Which of the following songs does NOT contain the word "you"?


Answer: Neither of these

"My Immortal" has you in the first verse "I'm so tired of being here/ suppressed by all my childish fears/if YOU had to leave" and "Hello" has it in the chorus "has no one told YOU she's no breathing/hello/I'm your mind, giving YOU someone to talk to
14. Where was the clip to "Bring Me To Life" filmed?

Like "Bring Me To Life", "Going Under" was also directed by Phillipe Stolzl, but filmed in Berlin.
15. Which of these words does not appear in the lyrics of the album "Fallen"?

Eternal doesn't come into any of the lyrics. "Raping" appears in "Haunted" "I can feel you pull me down/ saving me/ raping me." "Raindrops" and "Chaos" are in "Imaginary" from the lines: "where the raindrops as they're falling tell a story" and "don't say I'm out of touch, with this rampant chaos - your reality"
16. Where was the clip for "Going Under" filmed?

Phillipe LeStolzl directed this and "Bring Me To Life". The clip for "My Immortal" was filmed in Barcelona.
17. "Going Under" what order does Amy sing the lyrics below in?


Answer: screaming, decieving and bleeding for you

From verse one, "now i will tell you what i've done for you / 50 thousand tears I've cried / screaming deceiving and bleeding for you /
and you still won't hear me."
18. In the chorus from "My Last Breath" what does Amy sing "ends here tonight"?

The chorus of the song goes, "holding my last breath / safe inside myself/ are all my thoughts of you / sweet raptured light it ends here tonight".
19. Which of the following song titles (as printed on the CD cover) is incorrect?

"My Immortal" and "My Last Breath". Some people often call "My Tourniquet" when it is printed on the CD cover as simply "Tourniquet".
20. Alright, last question... what song has the the words "purple sky" in the lyrics?

It's from the chorus: "in my field of paper flowers / and candy clouds of lullaby / I lie inside myself for hours / and watch my purple sky fly over me". I hope you enjoyed the quiz, let me know if you did! All my info was taken from the album "Fallen" and the Evanescence site www.evanescence.com
Source: Author Hawkeye's Gal 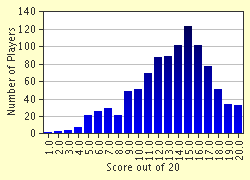 
Other Destinations
Explore Other Quizzes by Hawkeye's Gal