Are you a Green Day "Nimrod"? Or are you just an "Idiot"? Take the quiz to see how well you know Green Day lyrics, from all albums!

"Boulevard of Broken Dreams" is the second single from the album "American Idiot" (2004). The video was directed by Samuel Bayer, who also directed "American Idiot", "Holiday", "Jesus of Suburbia" and "Wake Me Up When September Ends".
2. "I got a fever, a _______." Can you fill in the blank to this Green Day song?

These lyrics are from the song "Peacemaker" from the album "21st Century Breakdown" (2009). 21st Century Breakdown won the Grammy award for "Best Rock Album" in 2010.
3. "There's a boy who fogs his world and now he's getting lazy, There's no motivation and frustration makes him crazy." Who is Billie Joe Armstrong singing about in this song?

This is from the song "Who wrote Holden Caulfield" off the album "Kerplunk!" (1992). Holden Caulfield is a character from the book "The Catcher in the Rye". The song describes Holden, and how Billie sees him.
4. Can you complete the line from this Green Day song: "It's comedy and tragedy, it's..."?

It's from the song "Android" off "Kerplunk!" (1992) The song is about being afraid of growing older, and being anxious about how life will turn out.
6. "What's the difference between you and me? I do what I want, and you do _____" Fill in the blank to this Green Day song from 1997.


Answer: What you're told

From the song "Reject" off the album "Nimrod" (1997).
"This song is about when a kid's mother wrote to Billie Joe complaining about the content on "Insomniac", which her son had received from his grandma for his birthday. Billie wrote a letter back to her and "Reject" is based on his letter."
Source: greendayauthority.com
7. Which of the following lyrics is NOT from the song "When I come around" by Green Day?


Answer: "I hope I won't be there in the end if you come around"

These lyrics are from "In The End". Both of these songs are from the album "Dookie" (1994).
Fun Fact: The video for "When I Come Around" features Jason White, a friend of the band who went on to become their second guitarist for live shows. He is the guy kissing his girlfriend on the bonnet of a car.
8. "Princess in a schoolgirl's dream". Who is Billie Joe Armstrong thinking about in this Green Day song?

The song "Macy's Day Parade" is off the album "Warning" (2000).
As Billie Joe Armstrong puts it:
"It's sort of about the lies and deceptions that you have growing up and how you have to find your own way around."
Source: songfacts.com
Source: Author cupcake94 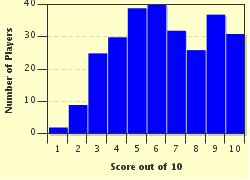 
Other Destinations
Explore Other Quizzes by cupcake94