I am a huge Green Day fan and their album "Nimrod" is one of my favorites. Let's see if you know the lyrics as well as I do. Enjoy!

Quiz Answer Key and Fun Facts
1. Name the song these lyrics belong to..."Choreographed and lack of passion. Prototypes of what we were."

Besides the guitar, Billie Joe also plays the harmonica, mandolin, drums, and the piano.
2. What is the next word of this Green Day song ("Time of Your Life"): "So take the photographs and still frames in your ______."

"So take the photographs and still frames in your mind. Hang it on a shelf of good health and good time..."
3. Who wrote the lyrics to "Hitchin' a Ride"?

Billie Joe wrote every song on the album "Nimrod." The music was written by all three band members: Billie Joe, Mike Dirnt, and Tre Cool.
4. Name the song these lyrics belong to..."Broke my engagement with myself. Perfect picture of bad health, another notch scratched on my belt."

"The Grouch", "Haushinka", and "Prosthetic Head" are all songs from "Nimrod" whereas "Waiting" is off Green Day's album "Warning".
6. What is the next word of this Green Day song? ("Scattered"): "I've got some scattered pictures lying on my bedroom floor. Reminds me of the times we ______."

"I've got some scattered pictures lying on my bedroom floor. Reminds me of times we shared. Makes me wish that you were here..."
7. What is the first line of the song "The Grouch"?


Answer: I was a young boy that had big plans

The other three incorrect lines are lyrics in the song, but not the first line.
8. The song "All the Time" starts out with what three words?


Answer: All the time

The first line goes "All the time, everytime I need it."
9. In the song "King for a Day", how old does Billie Joe say he started at?

The song begins "Started at the age of 4. My mother went to the grocery store..."
10. What year was the album "Nimrod" released? 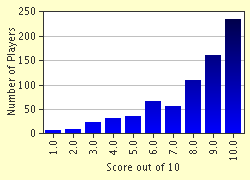 
Other Destinations
Explore Other Quizzes by msblack12